During The Things Conference this January I talked about the combination of LoRaWAN and on-device machine learning (TinyML). This is an incredibly powerful combination, as to preserve power and bandwidth LoRaWAN devices often resort to sending very little data. A device for monitoring machine health by observing the machine's vibration pattern might just send the peak motion every hour, discarding interesting potential fault states. With machine learning you can analyze the full signal on the device itself, and just send the conclusion ('abnormal vibration pattern seen') to the network.

To demonstrate the power of this combination during The Things Conference we managed to get Johan Stokking (the co-founder of The Things Network) on-stage wearing a sheep costume and a LoRaWAN-based activity tracker. The arm-mounted tracker runs a small machine learning model that classifies five different activities (standing, walking, jumping jacks, push-ups, drinking beer) in real-time, and constantly monitors for new activities. If a change is detected it sends a small packet over LoRaWAN.

Sheep classification during The Things Conference

And the best part? You can actually build the same demo. In this post we'll go over the hardware and steps required to build your first machine learning-powered LoRaWAN device.

To replicate the demo you'll need to get the following hardware:

(*) Naturally you can replicate the same build with your favourite development board, but you'll need to be able to get raw sensor data off the device. There's more information on this in the next sections. 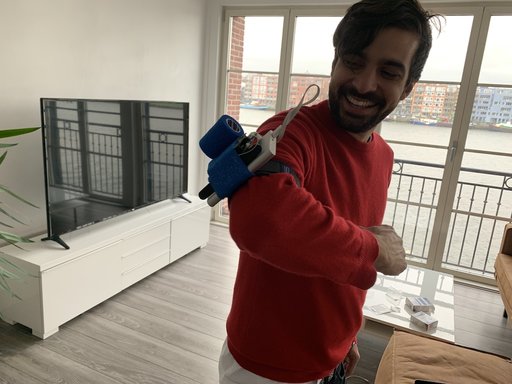 Dan Situnayake with the sensor strapped to his arm

To build a machine learning model you need to collect data, and preferably lots of data in many different variations. For the demo during The Things Conference we collected 14 minutes of data evenly spread over the five movements. It's also important that you add variety in how you perform the movements, or use multiple people to generate the data, to ensure that the model works reliably in the real world. To collect the data:

During the data collection phase you need access to raw data - and because of bandwidth limitations it's not practical to offload this data over LoRaWAN. The IoT Discovery Kit fortunately has a WiFi radio which you can use to retrieve the raw data. If you have a different development board and you have access to the raw sensor data (for example, using an SD card) you can send your data to the ingestion service and the data is automatically added to your project. 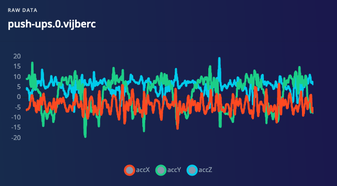 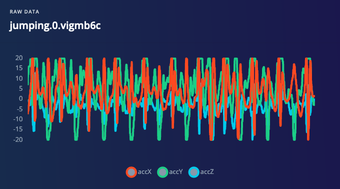 With the raw data in place you can let the computer learn to distinguish between the five movements. This is a three stage process:

To train the model, follow steps 3 and 4 in this tutorial. In there, you design and test the model against real world data. 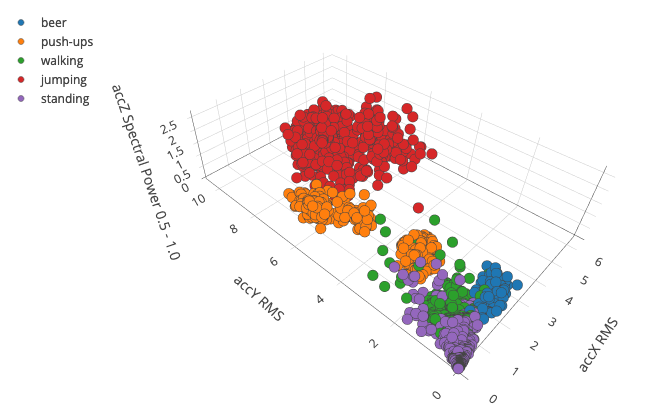 Output of feature extraction, seeing a separation between the five classes.

4. Deploying back to the device

If you're happy with the model - this might take several iterations to ensure you capture every variation - you can then deploy the model back to the device. Afterwards you no longer need a WiFi connection, the model will run in realtime on the development board, and only when you change between movements the device sends a message over LoRaWAN. To do this:

The above code sample takes four seconds of sample data, then moves over this in two second windows (sliding window), classifies each window, and if 70% of the windows are classified the same and if the movement was different, it sends a message to The Things Network. You can then show the data either in the The Things Network console, or use a custom application to display the output. 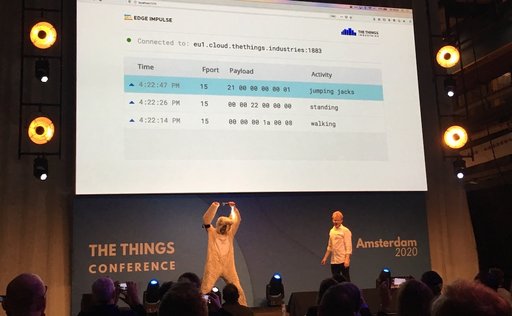 Live classifying sheep movements. Data goes from the device over LoRaWAN, through The Things Network, to a custom dashboard.

Building this demo (and convincing Johan to wear a sheep costume) was tremendous fun, and I believe that LoRaWAN and machine learning together will lead to more powerful and sophisticated devices, without sacrificing battery life. Some other ideas that I see are using accelerometers to detect whether a package is on a boat or a car (for asset tracking), detecting abnormal temperature patterns (for cold-chain monitoring), or using a microphone to hear glass breaking (for building monitoring).

If you have a great idea that you want to work on, let us know. We can't wait to see what you'll build!

Want to learn more about adding machine learning in LoRaWAN devices? Watch the demo of Jan Jongboom during The Things Virtual Conference.

Jan Jongboom is the CTO and co-founder of Edge Impulse. He has been frustrated by sophisticated sensors that are underutilized since 2015.