Some of our TTN - LoRaWAN gateways in Berlin. Get a live impression of your own!

Each and every gateway is useful, wether it is big or small, multichannel or 1-channel. Doesn't matter. TTN is a patchwork net.
You may get your own live impression about range of LoRaWAN technology in an urban electrosmoggy crowded area, where 3.500.000 people are living in, called Berlin.
Data were obtained by one or more contributors (taxis, messengers, testers, members) constantly monitoring the net on a voluntary basis.
A picture may tell you more than much words... so, have a look at those selected (out of 37 being online today) TTN Community Berlin gateways to www.ttnmapper.org below:

Note: This is constant work in progress - visit us later again. TTN is crowd owned, crowd based, crowd driven, crowd managed, so it may be of course, that some gateways will be offline some time, esp. the little ones, who are often experimental only. But there is hope, they will be replaced by bigger ones, some day :) Thx.

If you think, there is a location, where more coverage would be useful, don't hesitate and install your own gateway. TTN = "We are the net!". Thank YOU! 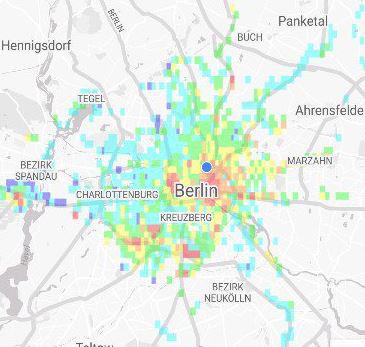