translate in all google supported languages

After V2.1-1.5 was upgraded to V2.1-1.6, after our tests, the diode components should be used on the charging circuit, but we used a fuse, the diode is unidirectional, and the fuse is bidirectional. This causes the USB voltage to pass directly to the battery. After a long woking time, the battery may become hot or burn, so you cannot use this V2.1-1.6 version to charge the battery! ! ! (Battery can be used, but the battery cannot be charged)
If you want to use this V2.1-1.6 version to charge the battery, you need to replace the fuse in the figure with a diode (Type: BS5819 SOD123 1A) to use the charging function normally. The following is an upgraded picture.]

[update: It's offered here in aliexpress]

"!Attention users of TTGO2.1 v1.6 (boards labeled “T3_V1.6” on pcb): During a test run on battery after about 30 minutes the battery exploded and got on fire. Board and battery burned down to nearly nothing in less then 30 seconds.

I used a Li-Po battery 3,7V / 840mAh. It was properly connected to the board, since the board did boot and run on battery. I then connected the board additionally to a 1A USB wallcharger using it’s USB port.

Since there is nothing left after board and battery burned down, i cannot investigate what happened.

But i remember that i wondered about the voltage measurement which was shown by my software, using the voltage divider on board: It showed 5,024 Volt. If this is really correct - and i assume it is - it means that there must be a hardware design error on the board which is causing a direct connection of the battery to USB 5V!"

I just received a warning from the TTGO (lilygo store) regarding their TTGO ESP32 Lora v2 1.6 with regards to charging LiPo’s via the 2.1 1.6 board.

:warning:
Please all be careful.

"Diode components should be used on the charging circuit.
We used a fuse. The diode is energized in one direction, but the fuse is bidirectional, which causing the USB voltage directly access to the battery.
After a long time charged, the battery is hot or burned, so please don’t use this V2.1-1.6 version to charge the battery! ! !

If you want to use this V2.1-1.6 version to charge the battery, you need to replace the fuse in the picture with a diode, then the charging function return to be normal.
It can be changed the model number of the diode : BS5819 SOD123 / 1A current."

Verkehrsrot:
"This seems to be a reaction to my post above, i forwarded it to LiLyGo. That means my assumption battery has direct connection to 5V USB was validated by them.
Unfortunately another fatal design flaw and poor quality management seen at a chinese manufacturer…

LiLyGo / TTGO will send replacing diode, if requested, Santos told us there: 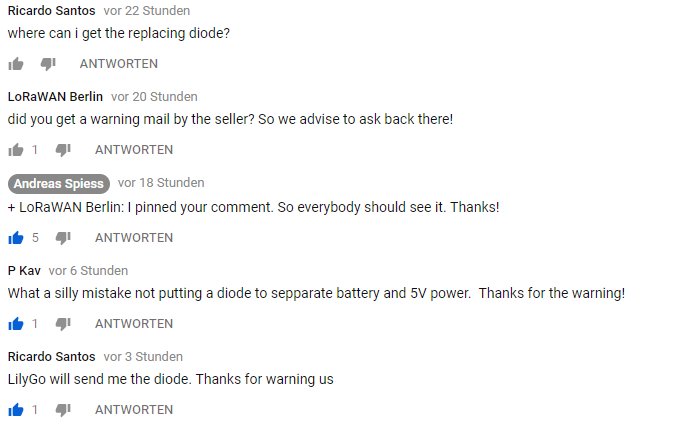 Verkehrsrot
I received same mail today.
This is really dangerous. If i would have left the board with battery and USB connected unattended, my flat would probably had burned down. And i used a small 3Wh battery only. That’s far less than e.g. a common 18650 cell…