In addition to the collection of Gateways that get commissoned and 'pop-up' tested through the Flackwell Heath site (as often seen on TTN Map) what is hoped will be the 1st BE&C permanent GW deployment & comissioning exercise is now complete. A new GW has been installed on the Cookham side of the River Thames - in Cookham Rise.

As host site internet connection was not available backhaul to TTN servers is via cellular BBand. Tests show latency not too excessive (~15-35ms ping time higher than local DSL connection).

Initial coverage tests show good coverage in and around Cookham, Cookham Rise and out across the River Thames east to Hedsor & to the Clivden House escarpment and north to the higher ground above Bourne End and in parts of Flackwell Heath including to the Amersham & Buckinghamshire College site in west Flackwell Heath off Spring Lane/Heath End Road - approx 5.7km LOS. Coverage also extends n.west across the River Thames and up the Wye Valley through Wooburn to Wooburn Green approximately 4.5km away. Unfortunately the eastern edge of Winter Hill and the National Trust grazing grounds running down towards the Thames limits coverage in a north westerly or westerly directions. Parts of Cock Marsh and the river frontage opposite parts of Bourne End are in terrain shadow from the low lying hilly ground and the railway embankment.

Further checks east, south east and south of the site will continue over the next couple of weeks and will be updated here. We also hope to publish a projected coverage map of the area shortly. 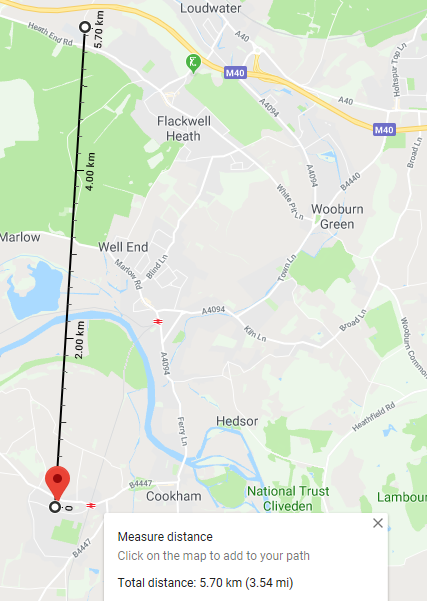