After several months of testing and swapping units what is hoped will be a deployment of the 1st permanent Flackwell Heath GW, the 2nd permanent GW in the BE&C Community, has now been concluded and good general results mapped as show. Initially deployed with an indoor (attic space) arial it is hoped that once we have scaffolding access this will switch to an outdoor installation off a 5m run of Aircell 5 ultra low loss cable - already in stock awaiting deployment.

Coverage around the FLH high ground south and south east of the village centre and out past the local college along Heath End Road is pretty good at around 1.5-3+km as is coverage across the Wye Valley to the Holtspur and Home Farm Woods areas - again around 1.5-2km. Unfortunately terrain masking from the higher heath land as seen in the topology map means coverage down into the Wye Valley itself around Wooburn Green, Wooburn Town & Loudwater, is limited. Similarly as the host site is a few hundred metres too far from the edge of the Thames Valley escarpment the 'view' down to e.g. Bourne End and the RiverThames area is largely obscured. Happily coverage returns as the terrain rises on the far bank heading towards Cookham and particularly around the north east slopes of Winter Hill and the golf course. Good tracks have been seen out to around 3.5-5.25km. Once the antenna is outdoors (and a metre or two higher!) we anticipate further improved coverage

Further updates will be posted here once the improvements are made. 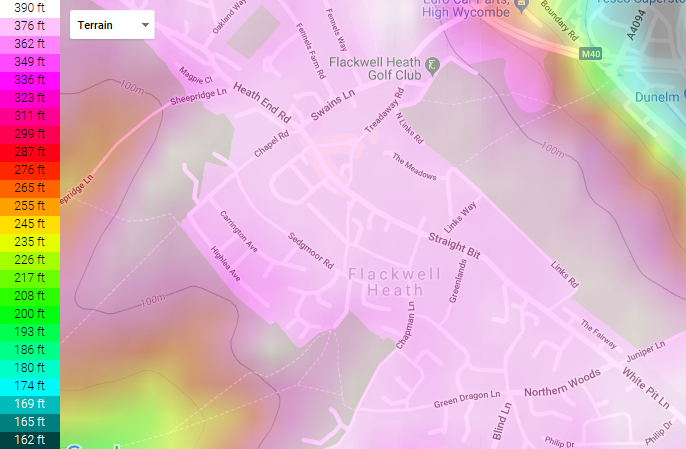