Pop-Up trials for TTIG in Marlow

A recent opportunity to access a 'friendly' office in the Thames Valley town of Marlow provided a chance to test the Things Network Indoor Gateway (TTIG - former tracknet.io/tabs.io Tabs GW) to see how a unit might perform in a mixed urban/semi-urban/rural environment.

Based on the local geography & topology it was decided it was a waste of resources to try and deploy a more expensive very long range, highly optimised system with e.g. high mounted, high gain antennas, etc. looking to reach 15, 25 or even 35km! The terrain would naturally limit to an area immediately around the town centre, visible local hills/escarpments and along part of the River Thames Valley, typically 1.5 - 3.5km distant.

Given previous tests had demonstrated reasonable coverage at those kinds of distances from a TTIG on trial elsewhere a unit was placed for a couple of days on a North facing window cill in the office on the 1st floor, (on the North, and slightly elevated area of the town) alongside a self contained Semtech LoRa IoTSTK as a reference unit for logging GPS sensor data (unit now obscolete and unsupported, but still effective as a baseline for comparisons! :-) )

As can be seen from the sample data plots in the maps below coverage was more than adequate for many uses, with some 'not-spots' in the town centre (east side of High Street and part of Institute Road or down near the rail station) due to building clutter and poor GW positioning, the expectation is that a repeat trails period in a few weeks time with a higher GW location will improve coverage even further. The reach part way up the Chiltern Hills immediately north (WNW - ENE) of the town/GW location was as expected/predicted as was coverage to easily accessible areas of the WinterHill escarpment across the River Thames to the south/south-east......stay tuned for more tests in the coming weeks & months and a potential new GW long term siteing.... 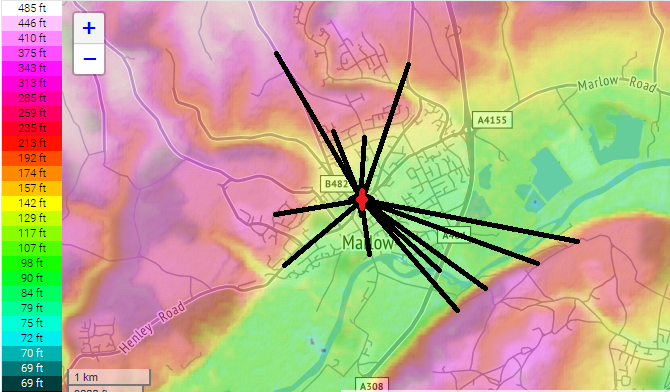