The arrival of my 3dBi antenna from Ali Express was the cue to move my multi channel gateway out into the wilderness so no time to waste! This was the last spoke in the wheel, I already had a few spare Raspberry Pis and SD cards and my RAK831 had already landed a couple of weeks ago . I had also made contact with Kersing who is very helpful on the TTN forum and who had designed and ordered some interface boards for the RAK module which makes for a very neat gateway assembly.
For a small amount of money I obtained a couple of these boards from Kersing, the boards are a nice reliable way to mate the RAK831 module neatly with the Raspberry Pi, thanks for the help!

Having chatted a good bit about antenna design, injection losses, cable losses and the price of fish, I decided some time ago that I should go with a 5M long patch lead which would match the 5M pole on my roof and allow me to terminate the antenna cable in an external waterproof box on the base of the pole. It would mean the least amount of connectors and terminations and a cable loss that should not eliminate totally any gain (Yeah, it's Chinese and not expensive) from the antenna. This also meant putting the gateway outdoors which in our terpereate climate would hopefully just mean waterproofing but we'll see how this works out, the gateways do make a little heat!

The plan was to use a wired ethernet connection to the Raspberry Pi, making a DIY PoE (Power over Ethernet) cable which would bring DC power to the gateway on spare, unused strands of the network cable. The theory being that Watts = Volts x Amps and Ohm's law telling us I = V/R suggests I should inject a higher voltage than I need into the cable and step it down to the correct voltage beside the Raspberry Pi it will substantially reduce the loss in the cable due to it's own resistance. To achieve this I used some PoE splitter/injector leads often found in CCTV systems to power the cameras and an old 19Vdc 1.75A power supply from a dead laptop. This sends 19Volts along 4 spare cores of the Ethernet cable which I then step down to 5.0Vdc using a buck regulator module inside the outdoor box. I am not sure what the average current consumption is but if it was 5watts for example, then using 19Volts through the ethernet cable would mean a current of just over 250mA, very low loss with this compared to a 5Volt supply which would surely drop some voltage. Note how the power is "split" out of the ethernet cable inside the box here.

Some plastic glands fitted to the bottom of the enclosure where the weather doesn't land will allow the antenna to enter and connect to the gateway and of course the ethernet cable with PoE also.

Glands to seal cable entry, just big enough to pass the plugs through and still close on the cables

And a little mechanical engineering to graft an old antenna mount I salvaged when I tidied up the digital terrestiral TV aerials earlier in the year. This allows the waterproof box to mount on the bottom of the existing pole, all neat and tidy.

All done and installed outside, the antenna cable hangs down below the box with a "drip loop" to make sure not to run water into the box by accident. The power an ethernet all connected too and we are ready to throw the switch in the house and re-start the gateway in it's new permanent location and with it's new outdoor antenna.

And this is the other end of that ethernet cable inside the attic space. I wired a socket with only the data cores back to the network switch you see on the left here. It is not a case that I don't trust myself but as there is 19Volts kicking about in the cable from the "Inject connector" up to the gateway I guess there is no guarantee that somebody some day may send that back down to the switch. By wiring only the data pairs one hopes the risk is nil!

Power and Ethernet injected into the cable that feeds the gateway

The good news is that it works perfectly. In fact the packet forwarder that Kersing wrote installed so uneventfully I don't actually recall anything to relay in this post! If you haven't used resin.io then I recommend that you try this packet forwarder for your gateway. It has a superb online control panel and is clearly designed for remote operation and is very robust with regard to auto recovery etc. I am happy that I ended up trying this, it works so well. Thanks again Kersing!

If you're South of Dublin or North of Wicklow along the N11 or M11 there is a good chance you could get reception on my gateway, of course you're welcome to try if you're within range. Good luck, Garry 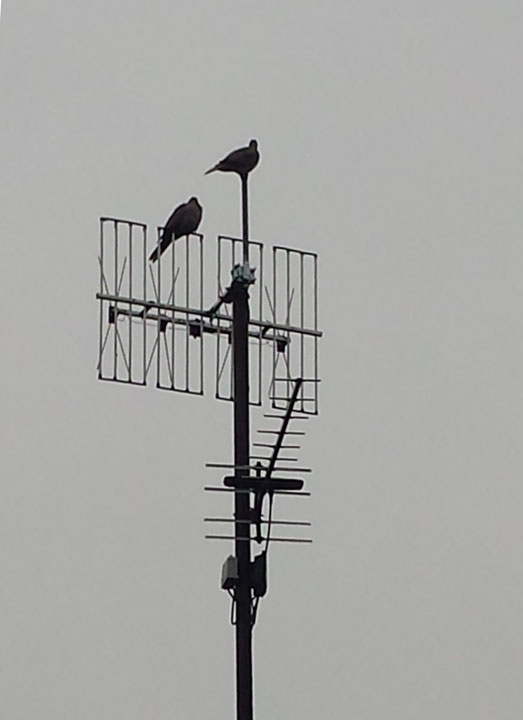