Yesterday lunchtime we went live with what may the 1st full (8 channel) gateway in Nottingham :-)

After a few weeks of configuring, soak testing & commissioning back at my Thames Valley base I quickly installed it in the south Lenton area of the city. Placed due east of the University, the A52 Ring Road/A6005 flyover and some 3-400metres due east of the Queens Medical Centre the device is now up and running and has been stable and visible in TTN for >24hrs. A 'long term' loaner from one of my companies this GW is expected to be in place for at least the next 3-6months and hopefully through to Summer 2019 and probably beyond.

Currently installed with an indoor arial to the west side of host building it is hoped that within the next 2-4 weeks we will be able to extend to an outdoor position, possibly a couple of metres higher, giving scope for improved coverage. The map shows a rough coverage check from a similar unit with an indoor arial mounted on the east side of the same building from a couple of months back.....a quick walking test on the local roads and along the Nottingham/Beeston Canal bank, a quick check on the west side of the Castle mount, and a quick drive around of some of the local A/B roads. Sadly the lack of site elevation meant that the ring road flyover and raised ground supporting the dual carriage way caused terrain masking limiting coverage to the s.west, west along the University Boulevard and out to around Beeston or to the n.west into the university campus close by at ground level. I hope to repeat the exercise in greater detail shortly but in the meantime Nottingham TTN users are invited to conduct their own mapping exercises in the surrounding areas - poss including more extensive coverage checking on the University campus or even inside the QMC?, up the riased ground to the north towards and along the A6200 or possibly filling in coverage details towards the Park area around the Castle mount west side - please post your findings here.....

....in the meantime I'm now looking for a candidate site for a 2nd GW to be deployed June/July! :-) 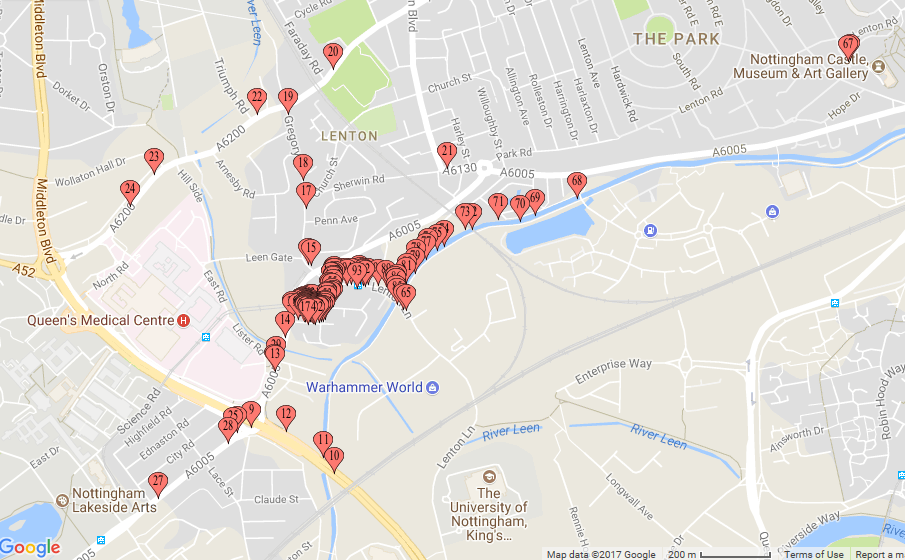