Here are some loose calculations on the RF link budget for LoRa systems. I've worked through this exercise for three reasons:
1. To determine the footprint extents we should expect from a typical gateway
2. To give some info from which we can identify where to place gateways to give good coverage to Oxford
3. To let me refresh my memory as to how to plan out an RF network for coverage!

To begin, we need some parameters...

Next we need some equations to extrapolate a working distance from transmitted and received power levels...

First equation calculates the effective radiated power (the power that leaves the antenna) from the power fed to the antenna.

I shall assume we are using a nominal Omni antenna at the gateway.

Second equations identify the received signal level, hence pathloss, that gives us the minimum required level of coverage at the cell edge (hence that indicates where the cell edge is.)

We can now use this pathloss value to indicate a point at which a Thing will just about receive the minimum coverage necessary to work. From this we can now use propagation prediction models to determine the distance from the gateway at which this pathloss would be expected.

The Okumura-Hata model is an equation for predicting signal propagation. It was devised by Hata as a curve to fit drive-test measurements made in city areas by Okumura. Hata's model gives values of pathloss at given distances between a base station (LoRa Gateway) and a mobile (LoRa Thing). It factors in various effects such as transmit frequency, antenna locations, and the scattering, diffraction and reflection of signals as they pass through the typical clutter (trees, buildings, etc) seen in the city.

For our LoRa network we know (or can estimate) the following:

In other words we can estimate that placing gateway antennas on high roofs (30m) in the city centre will allow signals to remain usable up to 5.7km away.

Hata's suburban model is a correction on the urban model. It accounts for the differences in clutter in suburban areas compared to urban areas - e.g. in suburbs buildings tend to be lower, thinner-walled and more spaced out, thus they are expected to attenuate signals to a lesser degree.

From above, at 5.7km from the gateway, Urban Pathloss (LU) would be 151.5 dB but Suburban Pathloss (LSU) would be only 141.65 dB. Signals could hence travel further before they hit that 151.5 dB pathloss limit. We can add the factor onto our urban pathloss score to determine this new distance.

The Hata equations assume signals will pass through clutter that is typical of a small city. They then presume that the signals are received by a device placed outside.

To plan for signals being usable indoors, the link budget needs to incorporate an additional Building Loss, which is the amount by which a signal will be attenuated on passing from outdoors into the building. Whether indoors or outdoors, each Thing must receive signals above the minimum sensitivity level. So to ensure coverage for Things placed indoors, the predicted outdoor signal level must exceed the minimum sensitivity by at least the building loss figure.

In Oxford City Centre, we might expect building losses of up to 20dB. This means:

In the suburbs, we might expect building losses of up to 15dB. This means:

So, aiming to provide good indoor coverage will greatly reduce the service area of each gateway!

Other things that can affect the coverage achieved by a gateway:
• Antenna gain - I've assumed a fairly typical short antenna that offers a gain of 4.5dBi. Multi-element antennas are available that would push the antenna gain up to around 12dBi. This additional gain would raise the radiated power for the same Tx Power, which in turn would raise the received signal level for the same pathloss. A raised RSSI would allow a greater pathloss to be experienced before the signal fell to the minimum sensitivity. Hence with a better antenna the cell radius could be increased.
• Antenna height - We will be relying on rooftops for mounting antennas. The higher the mount, the greater the visibility of the antenna and subsequently the greater its range. (In practice, raising the antenna extends the distance signals travel before they start having to pass through or around the clutter. The prediction algorithm I have chosen accounts for this using the antenna height correction factor, CH.) We may not get much choice about antenna height, but we should aim for higher mount positions where permitted.
• Variation in terrain height - This has a similar effect to the variation of the height of the gateway's antenna. The Hata model tends to assume that the land is flat. For much of Oxford this is acceptable, though Headington Hill will clearly impact on the signal profile.
• Choice of operating mode - LoRa supports several different modes of operation (Bandwidth, Coding Rate, Spreading Factor) which each have different minimum receive sensitivities. The choice of mode will hence affect the allowable pathloss and consequently the gateways' service radius.

In writing this up, I'm reminded of why I spent a good part of my career designing and developing Radio Planning Tools. RPTs do all the above calculations for you, to a much greater level of detail. They use better models and can predict coverage on a bin-by-bin basis across the whole area to produce detailed maps of propagation. They can more factor in the subtle variations in terrain, clutter and other factors seen bin by bin over the geographic area. With an RPT you can quickly assess the coverage potential of many selected sites, to produce a plan for deployment of the optimum number of gateways, to provide the right service over the right area. At the moment, however I don't have access to an RPT equipped with suitable maps of the Oxford area. I shall see what I can pull together for subsequent work.

In the meantime I would appreciate if anyone could double-check my calculations? It's been a long time since I attempted to work these kinds of numbers out by hand and I would not be surprised to find errors in there somewhere. 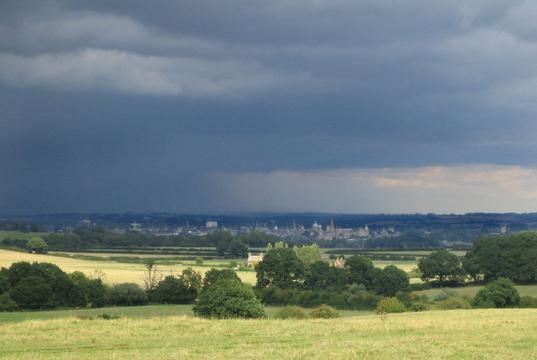