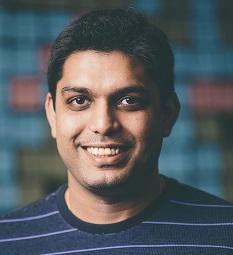 Ranveer Chandra is the Chief Scientist of Microsoft Azure Global, and Partner Researcher at Microsoft Research. His research has shipped as part of multiple Microsoft products, including VirtualWiFi in Windows 7 onwards, low power Wi-Fi in Windows 8, Energy Profiler in Visual Studio, Software Defined Batteries in Windows 10, and the Wireless Controller Protocol in XBOX One. He is active in the networking and systems research community, and has served as the Program Committee Chair of IEEE DySPAN 2012, and ACM MobiCom 2013.

Ranveer started the FarmBeats project at Microsoft in 2015, and has been leading it since then. He is also leading the battery research project, and the white space networking project at Microsoft Research. He was invited to the USDA to present his work on FarmBeats, and this work was featured by Bill Gates in GatesNotes, and was selected by Satya Nadella as one of 10 projects that inspired him in 2017. Ranveer has also been invited to the FCC to present his work on TV white spaces, and spectrum regulators from India, China, Brazil, Singapore and US (including the FCC chairman) have visited the Microsoft campus to see his deployment of the world’s first urban white space network. As part of his doctoral dissertation, Ranveer developed VirtualWiFi. The software has over a million downloads and is among the top 5 downloaded software released by Microsoft Research. It is shipping as a feature in Windows since 2009.

Ranveer has published more than 80 papers, and filed over 100 patents, more than 85 of which have been granted by the USPTO. His research has been cited by the popular press, such as the Economist, MIT Technology Review, BBC, Scientific American, New York Times, WSJ, among others. He has won several awards, including best paper awards at ACM CoNext 2008, ACM SIGCOMM 2009, IEEE RTSS 2014, USENIX ATC 2015, Runtime Verification 2016 (RV’16), and ACM COMPASS 2019, the Microsoft Research Graduate Fellowship, the Microsoft Gold Star Award, the MIT Technology Review’s Top Innovators Under 35, TR35 (2010) and Fellow in Communications, World Technology Network (2012). Ranveer has an undergraduate degree from IIT Kharagpur, India and a PhD from Cornell University.