LoRa32u4 will be used as a general abbreviation for above family of boards.

The ATmega32u4 has built-in support for USB and does not require a separate USB to serial converter chip. This has advantages but also disadvantages: After a reset the serial port will be temporarily disconnected and switched to programming mode and automatically switches back after some seconds. This sometimes can give issues when uploading and/or when using the Serial Monitor.

These boards have a separate LoRa antenna that connects via a tiny cable to the on-board IPEX/U.FL connector (for versions 1.1 and higher, version 1.0 only supported a wire antenna directly soldered to the board). The battery connector is a 2-pin JST-PH connector. The battery voltage can be monitored via an analog pin.

Currently 5 different versions of the BSFrance LoRa32u4 II board exist.
Below is a brief description of each version:

The following libraries implement a LoRaWAN protocol stack that can be used with the these boards:

Each of these libraries has its own way of configuring (e.g. region/frequency) settings. For details check the readme and other documentation included with each library.

Both libraries contain examples for implementing a node for both ABP and OTAA activation.
Try to get the ttn-abp.ino example working first. If that works continue with the ttn-otaa.ino example. When both these examples work then the LoRaWAN part of your setup works. From there you can start to try more advanced sketches and adding features (e.g. sensors). ABP and OTAA require different keys and settings. See TTN Console and remarks in the sketches for more information.
Try to get the basics working first before asking questions about issues with other sketches.

When using the two common Arduino LMIC libraries on 8-bit ATmega328 and ATmega32U4 MCU’s (especially 8 MHz like on LoRa32U4) it is required to relaxed LMIC timing, otherwise down link messages and OTAA joins on lower spreading factors will likely fail.

LMIC timing can be relaxed with LMIC_setClockError() as shown below where it is
added to the ttn-otaa.ino example.
A value of 3 percent is usually sufficient for LoRa32u4. Different LMIC libraries may need a different value. The 3 percent was empirically determined. During testing of joins and downlink messages my observation was that the classic LMIC-Arduino library needs a little higher value than the MCCI LoRaWAN LMIC library.

DIO0: Is already hard-wired on the PCB to pin 7.
DIO1: Must be manually wired. It is preferred to wire DIO1 to digital pin 5.

Several examples on the web suggest to wire DIO1 to pin 6. Probably because it is next to pin 7 which is already hard-wired to DIO0. But wiring DIO1 to pin 5 instead has the following advantages:

DIO0: Is already hard-wired on the PCB to pin 7.
DIO1: Must be manually connected via solder bridge on the PCB or manually wired.

The solder bridge on version 1.2 connects DIO1 to pin 1 which is part of the serial interface. If you plan to use the serial interface (e.g. to connect a GPS module) then connecting DIO1 to pin 1 via the solder bridge is not a good idea. In that case it should be manually wired to pin 5.
Manual wiring will require some solder skills because the wire must be soldered directly to the DIO1 pad of the LoRa module. Version 1.2 does not have a board pin for DIO1 that the older boards had.

If you have manually wired DIO1 to a different pin than pin 5 then replace 5 below with the corresponding pin number.


For LoRa32u4 II v1.2 where DIO1 is manually connected to pin 1 via the solder bridge on the PCB. 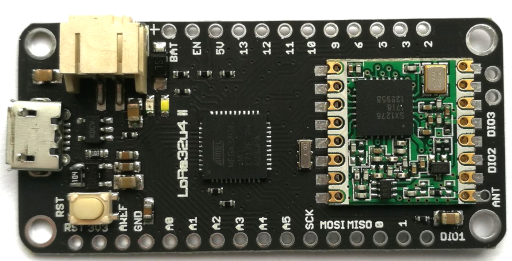 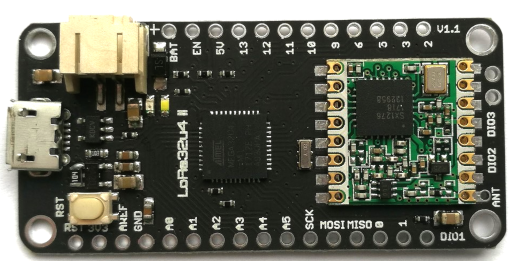 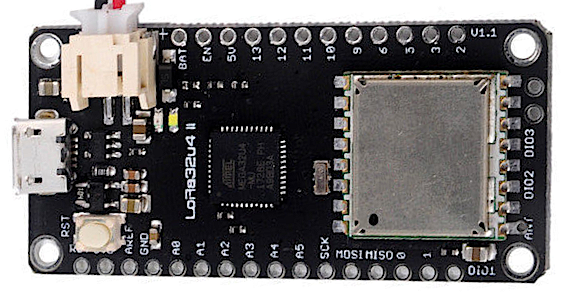 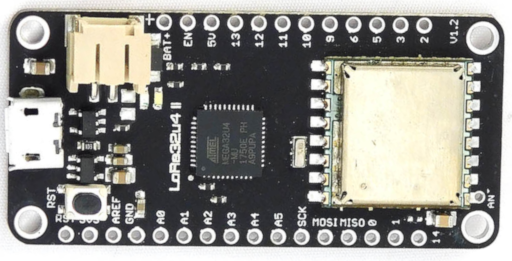 Using pins 1, 2 and 3 is a silly design choice because digital pin 1 is part of the serial port and digital pins 2 and 3 are the I2C interface that is used for connecting I2C peripherals like sensors and displays.
This model has version numbers on both sides of the PCB: V1.2.

We can dream about some Version 1.3 improvement

Right now, I have two 1.2 boards with a wire directly soldered to RFM95 DIO1.

I already was wondering why two ‘14’ pins. I had checked with a multimeter before but they are not connected to each other. So this is PD5. In ATmega 32U4 Arduino Leonardo Pin Mapping PD5 is defined as pin 22.
When looking in BSFrance-avr arduino core in variants\lora32u4II\pins_arduino.h
in the comments PD5 is listed as D30.

I have not tried this yet but I think we can conclude that the label ‘14’ for this pin is bogus.

We can dream about some Version 1.3 improvement

When looking in BSFrance-avr arduino core in variants\lora32u4II\pins_arduino.h
in the comments PD5 is listed as D30.

I missed that one, so D30 it is!
As I use those boards as Adafruit clone, I prefer avoiding this difference, for now.

BSFrance support is very kind, I will ask for info

Whatever, soldering DIO1 pin is not that hard, that was my first.

I’m having an issue with LoRa32u4 v 1.2. It sends join request to server, server replies with join accept, but the board seems never receive that message.

I connected DIO1 with IO1 with solder like you told, but I’m afraid of that IO1 is used by Serial TX. Can it cause a problem and interfere with LoRa functions if I turned verbose logs output to serial in LMIC settings?

Also, what is the right port mapping for LoRa32u4 v 1.2 with DIO1 and IO1 connected?

The AVR 8MHz microcontrollers can be a bit too slow for LMIC. To fix this OTAA JOIN ACCEPT timing issue try to relax LMIC timing, see:

Have you relaxed the timing by using LMIC_setClockError(MAX_CLOCK_ERROR * 1 / 100); between the LMIC reset and the join attempt?

For LoRa32u4 II v1.2 if you have connected DIO1 with the solder pads to digital pin 1 and have not connected DIO2 (which is not needed for LoRa) use this:

I’m having an issue with LoRa32u4 v 1.2. It sends join request to server, server replies with join accept, but the board seems never receive that message.

I reproduce this issue when my power supply is not powerfull enough.
If connected to VBat, Battery connector or +5V, your voltage can’t drop below 3.5V.

I connected DIO1 with IO1 with solder like you told, but I’m afraid of that IO1 is used by Serial TX. Can it cause a problem and interfere with LoRa functions if I turned verbose logs output to serial in LMIC settings?

One pin can’t share two functions (Serial + LoRa) that easily.
As I said, I soldered a wire directly on HDP13 DI01… to plug it on board pin 6.

On a side note, I’ve seen a strange behavior when using Reset.
As stated on Adafruit Feather 32u4 Lora thread, a reset put you in “Bootloader Mode”.

I did some testings with the same LoRa OTA Sketch.
It’s working fine either before or after a reset. There is a power consumption difference in deep-sleep though :

I guess Bootloader mode forces USB to Serial on… Forever.

PS: To make a “normal” reboot, you can short EN pin

Thanks for your replies!

It finally joined. I guess the problem was in IO1= Serial TX issue as the join actually happened right after I closed my Arduino IDE serial terminal window.

As to power supply, Couin, I didn’t plug any external supply at all. I used only the power provided by USB cable while looking into serial terminal output. Can this be an issue with join difficulties, how do you think?

It finally joined. I guess the problem was in IO1= Serial TX issue as the join actually happened right after I closed my Arduino IDE serial terminal window.

I’m discovering this board since last week… The more I do, the more I have to dig

As to power supply, Couin, I didn’t plug any external supply at all. I used only the power provided by USB cable while looking into serial terminal output. Can this be an issue with join difficulties, how do you think?

I first tested my boards pair with LoRaReceiver and LoRaSender sketches (in BSFrance archive), with serial (and power) Over USB.

Hope it will help!

I guess device definition has to propagate first

Propagate from where to where? Once you create a device in the TTN console it can be used immediately. No delays…

That was a bad supposition, I remove that sentence

Still, it didn’t worked immediately for me, for an unknown reason.

Has anyone found a schematic for the BDFrance LoRa32u4 II v1.2?
It’s reading ~4.6v for a battery level of 3.99v so I’m wondering if the resistor divider is not just two 100k resistors.

Have you tried using a capacitor between D9/ADC12 (BAT divider) and GND pin, it may help?
I will ask support for v1.2 documentation.

I’m using Adafruit LoRa M0 with LiMC library and it works perfectly with the TTN. I’m using Laird RG1XX Gateway.
I would like to learn more about the Sleep mode and I’m having difficulties finding information about that. If you have any tutorials, links or website, I appreciate if you could share.
Thanks in advance.

If you are interested in the mechanics behind, I suggest you to read this topic, a great start.
https://www.gammon.com.au/forum/?id=11497

Then, you can tinker your own or directly use an existing library, like this one.
https://github.com/rocketscream/Low-Power

It’s worth mentioning that if you do solder DIO1 to digital pin 1 on the BSFrance LoRa32u4 II version 1.2, then you MUST close the serial connection on your computer or the sketch will not run.

Just to be clear.
USB Serial is Serial0.
RX/TX (0/1) pins is Serial1.
If you use pin 1 for LoRa, you won’t be able to use onboard serial (Serial1). You still will be able to use Serial0 (Serial and programming with USB).
With a bit of soldering, you can use any other pin (I use pin 6).
Furthermore, ATMega32u4 is sometimes tricky to program. Best tip is to activate verbose upload option, to manually reset board when IDE starts uploading. This way, it works everytime.

Hi,
On this topic, for the last week I have been battling to get my Adafruit LoRa feather board to communicate with my desktop and after doing a lot of research and asking intelligent folk for help, finally managed to get it working.

The issues that I found are as follows:

Problem
Does anyone know or can point me in the right direction on how to:

I can upload hex data and see the results on the Thingpark backend.
I can send download hex data to my application from Postman - but it is encrypted!

It looks like you are not using TTN but another provider, why do you search for answers regarding downlink issues with that providers setup on the TTN forum? Please use the forum of that provider for questions regarding your issue… (the combination of LMIC and TTN provides the data unencrypted on the node)