oh look - what i’m getting now 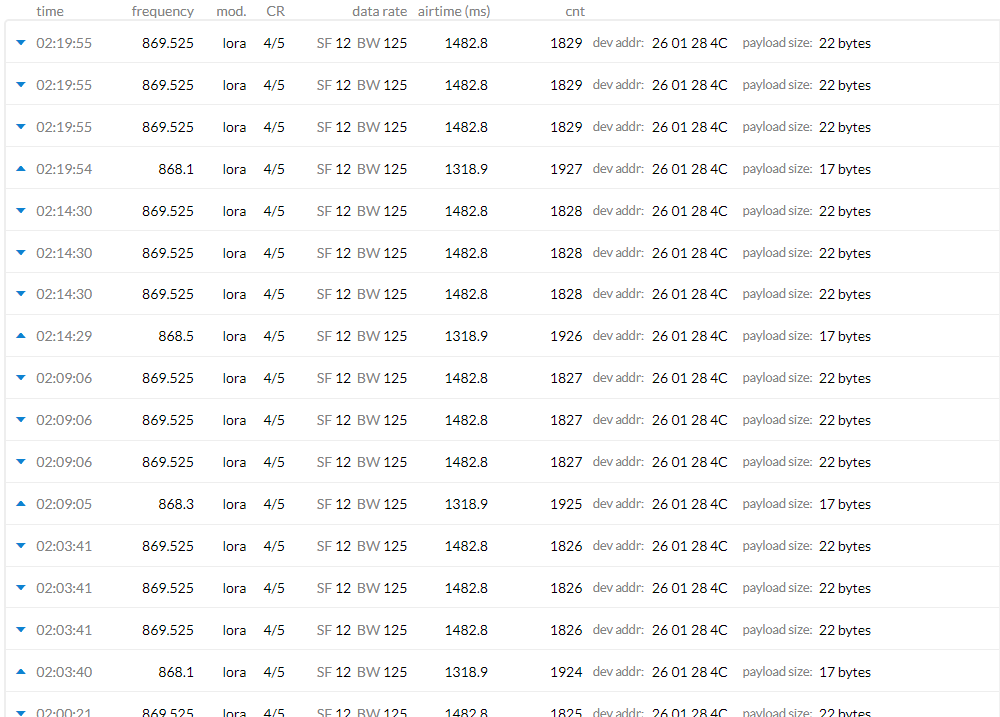 (this being with the same code as before, just updating the mcci lmic library after the fixes discussed in this thread)

22 bytes with SF12, in cycles of 5 minutes - i’m wondering that TTN backend does forward this to the gateway, since i assume this is far beyond TTN’s fair limit policy, and probably beyond duty cycle of the gateway?

What’s needed are a sequence of packets where the ADR related bits can be seen. If it looks like there’s still a firmware issue then the next step is to put debug logging in the related code paths.

i guess you intended to say i’m surprised, as i’m wondering rather means i’m asking myself (sorry für den englisch-unterricht

but yes, it does work, and i have no idea why this node actually went up to SF12 again as it’s still at the same place and distance from the gateway as it was when i started it after updating with the latest library - and where it went down to from 10 to 7 automatcially before.

That would be a misunderstanding. Gateway’s don’t invent traffic in either direction, they are just transparent translators between LoRa and IP backhaul. Whatever the problem is, it’s an issue of the contract between the node and the servers being disagreed upon or mis-implemented at at least one end.

There does appear to be a duplication issue in displayed downlinks somewhere, but as it’s not physically possible for a gateway to transmit three messages on the same frequency at the same time that cannot be a practical cause of this issue.

Further, even if duplicates did somehow get through, they would be immediately dropped as they contain already used sequence counter values.

If the node is not receiving the downlink, that could be an issue, regardless if it is caused by radio range, interference, or a gateway choking on an impossible combination of downlink requests. But the key to debugging that would be to monitor the node behavior - really, until your system is working 100% you want your nodes giving serial debug output on each transmission, and on each receive window, regardless if they find anything or not and if what they do find decodes as valid or not.

This ‘triple’ downlink/join issue is TTIG related and not LMIC I am sure, I can replicate it here - there are still issues with LMIC and ADR

Right, these are separate issues with different symptoms.

I have no TTIG in my area, and I experience the same issue since quite some time - that is: one downlink for every uplink in ADR mode.

I have disabled ADR on my nodes for now, as I don’t care too much; my setup is stable and I have good connectivity with SF7 anyway…

The maybe TTN backend and/or LMiC related issue with ADR acks for each downlink is definately new. This did not happend a month ago. So this must be caused by a change somewhere.

@htdvisser any insights on this issue?

I have two lmic nodes that receive a downlink at every uplink now. Any solution to solve this?

I see that as an acceptable workaround but not for permanent use. ADR is an essential part of LoRaWAN.

@Verkehrsrot in PAX counter I tried to set it with defaultConfig() but without success:

Setting cfg.adrmode = 0; does not make a change.
Probably I have to configure it elsewhere in PAX counter?

It should finish to fix the problem.

Currently PAX counter is using MCCI LoRaWAN LMIC library ( https://github.com/mcci-catena/arduino-lmic/releases/tag/v2.3.2) that does not contain the fix. I cannot find a function similar to the one you refer to so I cannot repair it now.

Until further notice I use the downlink command to disable ADR.

The settings from configmanager.cpp are “factory settings” and only used on fresh devices which have no config stored in NVRAM. So if you make changes here and flash it on a previously used device which already has a stored config in NVRAM nothing happenes, because device uses settings from NVRAM. You can enforce a reset to factory settings in flash by up- or downgradig the software version number in platformio.ini.

Yes i know, this is weird. The whole configmanager.cpp is crap (but works). I’m waiting for someone who delivers a pull request with a refactoring.

Use the version in development branch. This is using current mcci lib.

I just tested that but the problem is not solved with the development branch. sorry.