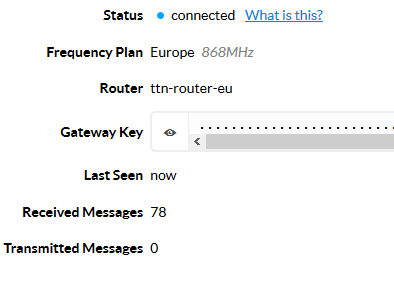 
Results of the approximately 2-hour field test, together in the Technology Foundation Berlin from 30.10.2017:

The goal was to finally find the ability to integrate into the TTN network from a community perspective. None of the gateways used was sponsored. All were bought for a fee. Influence of third parties was excluded.


For this we tested, simultaneously, at the same place, a Lorank 8 and two identical matchX gateways. All gateways were connected to the same router via LAN / POE cables.

The config of the one was the one shown by RT above. LBT (listen before talk) was switched off because TTN does not support it to our knowledge (currently).

A broadcast capable Arduino based node was available with mobile power. We tested the node indoor and outdoor. The gateways were indoor (inverse experimental arrangement ..). The node sent 1 data packet per minute with encoded useless data.

Indoor, the transmitted packets were correctly picked up by all gateways and displayed correctly in the TTN console.

Outdoor as well. In addition, in isolated cases, a fourth gateway could be diagnosed as recipient in the metadata. A short check in the TTNmapper revealed: It was the DB Kerlink TTN gateway on the south side of Berlin's main railway station.

Thus, we could prove  the complete integrability of the matchX gateways into the TTN network.