Far above the clouds - part 2

It did not take long to wait for the next opportunity for flight!

We met again just a month after the previous flight at the airfield in Piła on Saturday, June 16.
The second flight was also organized by Copernicus Project but this time it was related to experiments carried out by the group of high school students from Gdynia as part of 3-SAT project. Stratospheric balloon was used to perform two tests prepared by two groups of students: engineering and astro-biological. The purpose of the first test was to lift IKAR drone to an altitude of several hundred meters and to make a launch and landing after its release. The purpose of the second test was to raise the samples to a high altitude and recover them for further analysis.

Our goals for this mission were as follows:
- prepare a better LoRaWAN tracker,
- track the balloon directly on the HAB tracking site (via TTN of course!),
- compare the possibilities of using LoRAWAN with other commonly used transmission methods.

New tracker was based on the same components as previously but without the external microcontroller — there were only RN2483 and GNSS modules. The PIC microcontroller located inside the RN2483 module has enough resources to implement a custom firmware based on the LoRaWAN Library Plug-in for MCC released by Microchip. In addition, a dedicated protocol was used to communicate with GNSS module instead of parsing NMEA frames sent continuously. Such approach gives full control over the GNSS module in terms of configuration and data readout. We used our own breakout board designed for testing RN2483 module a year ago. GNSS module was glued to the other side of this board. Type of power supply and styrofoam box remained the same.

It was not the only tracker attached to the balloon. There was also a recycled radiosonde with APRS (Automatic Position Reporting System) and RTTY (Radioteletype) transmitters. Such devices are usually used to track balloons on the HAB tracking site with a help of amateur radio operators. In this case radiosonde was used to track and recover the payload quickly and easily by recovery team equipped with handheld radio receivers.

TTNHABBridge application was used as a software bridge between The Things Network and the HAB tracking site. Thanks to Bertrik Sikken - the author of this application. A separate application was prepared to record data, locate the node and calculate distance to the most distant gateway.

IKAR drone detached itself at an altitude of 750 meters and successfully landed a few minutes later. The rest of the payload flew up towards the sky. Our balloon reached an altitude of 23700 meters and landed 50 km from the starting point. Unfortunately trackers and samples were stuck on a tall tree. The recovery team reached the landing place but was unable to take the payload because it was very high and wedged in branches. Samples were recovered a few days later with the help of appropriate services and equipment.

It was very interesting to observe the location of balloon on the HAB tracking site using three independent technologies at the same time! Three objects could be seen on the map but all of them identified the same balloon. Generally callsigns are used to legally identify stations or operators. In Poland, SR prefix applies to unmanned (automatic) stations. SR0FLY is an amateur radio callsign registered to identify a radio device attached to a high-altitude balloon by Copernicus Project. So, SR0FLY and SR0FLY-11 were used to identify respectively RTTY (437.600 MHz) and APRS (432.500 MHz) transmitters. Device ID sr0fly-ttn assigned to our LoRaWAN tracker was to refer to this callsign.

In total, 69 TTN gateways participated in data transmission but 12 of them had wrong coordinates in their local configuration files - it would be great if owners took care of entering correct coordinates on their gateways. A single frame was received by a maximum of 42 gateways. The most distant gateway was located in Riga, so this time a distance of 605 km was reached. Data recorded during this flight can be found here.

This flight proved that the use of LoRaWAN (TTN in this case) may be a pretty good alternative to traditional HAB tracking methods. The advantage is that this method does not require involvement of licensed radio operators and appropriate (usually expensive) radio equipment. Gateways operate autonomously and usually around the clock. Quite large and constantly developed infrastructure is able to ensure uninterrupted data transfer. The range is similar to traditional methods at comparable transmitter power. The disadvantage, however, is dependence on the network itself. It can also be a problem when recovering the capsules — especially in areas without possibility of providing access to the network. 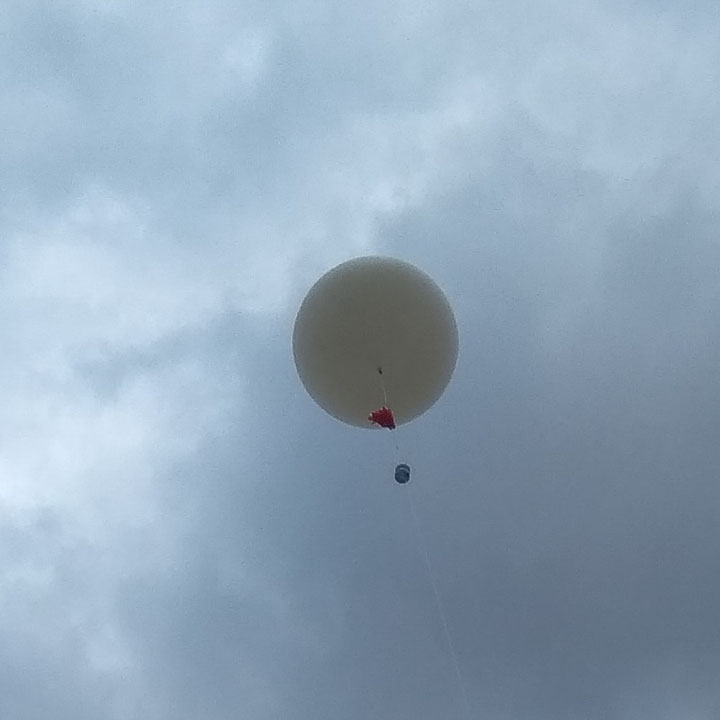