I did some more research on the subject. It seems that the PPD42 simply is the way to go. The GPY2Y1010 doesn’t seem very useful for this application. It’s does not necessarily always give wrong readings, but it’s considered unpredictable since the results are between reasonably good to almost random.

I also saw tests where the same was said about the PPD42. This is probably caused by the fact that it has two signal pins while an often used wiring only uses one of them. For setups using both channels very cool results were achieved.

What is particularly cool is that these also contain scientific references, dragging away the subject from pure ‘hey you guys with resistors and soldering irons, you’re just playing around and we don’t believe your results’. For this reason I would also not recommend the copied DSM501A. Even if it would perform similar it might raise questions you prefer to avoid.

A distributed network of low-cost continuous reading sensors to measure...

Waag society also used this for their new experiment. The first smart citizens project primarily taught them how you shouldn’t do this and based on this experience they made a new attempt. It’s based on WiFi but they consider porting it to LoRa (anyone knows more about this?)
http://waag.org/en/blog/making-sense-making-sensor. Also check the github link for more detailed docs. It also contains temperature/humidity and nitrogen sensors.

For that nitrogen sensor they used a more expensive sensor. I couldn’t find actual prices, but think about 50-100 euro because of calibration costs. Reasons I found so far to measure nitrogen is that it’s an easy proxy for dust. Interpreting this nitrogen sensor is also the reason you need the temperature/humidity because changes effect its effectiveness. But given that the nitrogen measurement makes it much more expensive than this cheap dust sensor I think when you’re on a budget it makes sense to drop both nitrogen and temp/humidity.

They base their concept on the dustduino. What is it? DustDuino can help individuals with limited resources monitor PM10 and PM2.5 concent... 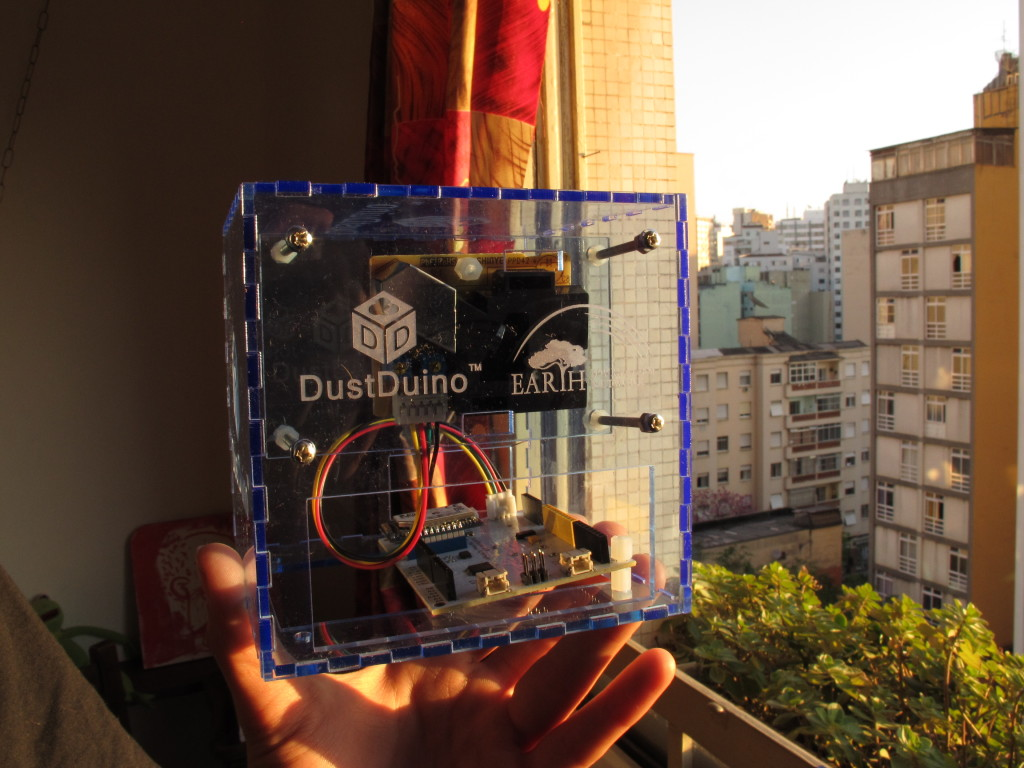 Why Measure Dust?? Being able to see the dust blowing in the wind has broad implications. Today, one in eight people in the world dies from exposure to air pollution, which includes dust. This stunning fact, issued by the World Health Organization in...

… and this is what I’m currently porting to LoRa

I’ll add a lab post in the near future. An indoor version seems to work pretty nice.

Summary from all links mentioned above:

It seems that the PPD42 simply is the way to go.

did you read this

Did you read this?

Since that ppd60 is about 20x more expensive compared to a ppd42 I think it’s an acceptable trade off.

true, but the ppd42 seems useless to me
’ The Shinyei PPD42NS was one of the first sensors we evaluated’ and they have the equipment to calibrate… we don’t

Regarding the first part of your post: please have a look at the links in my post from this morning. I consider myself not qualified to make the choice. But given the results in those links by people who look better qualified to this the results seem acceptable to me. As long as you don’t expect real time result, and that’s exactly in line with that aircasting link. Just imagine an average in the graph they use to show the PPD42’s noise.

The ‘thing’ with AirBeam is, that they developped special firmware, in cooporation with the factory.
So you’ll never get the same results if you use the open source code… 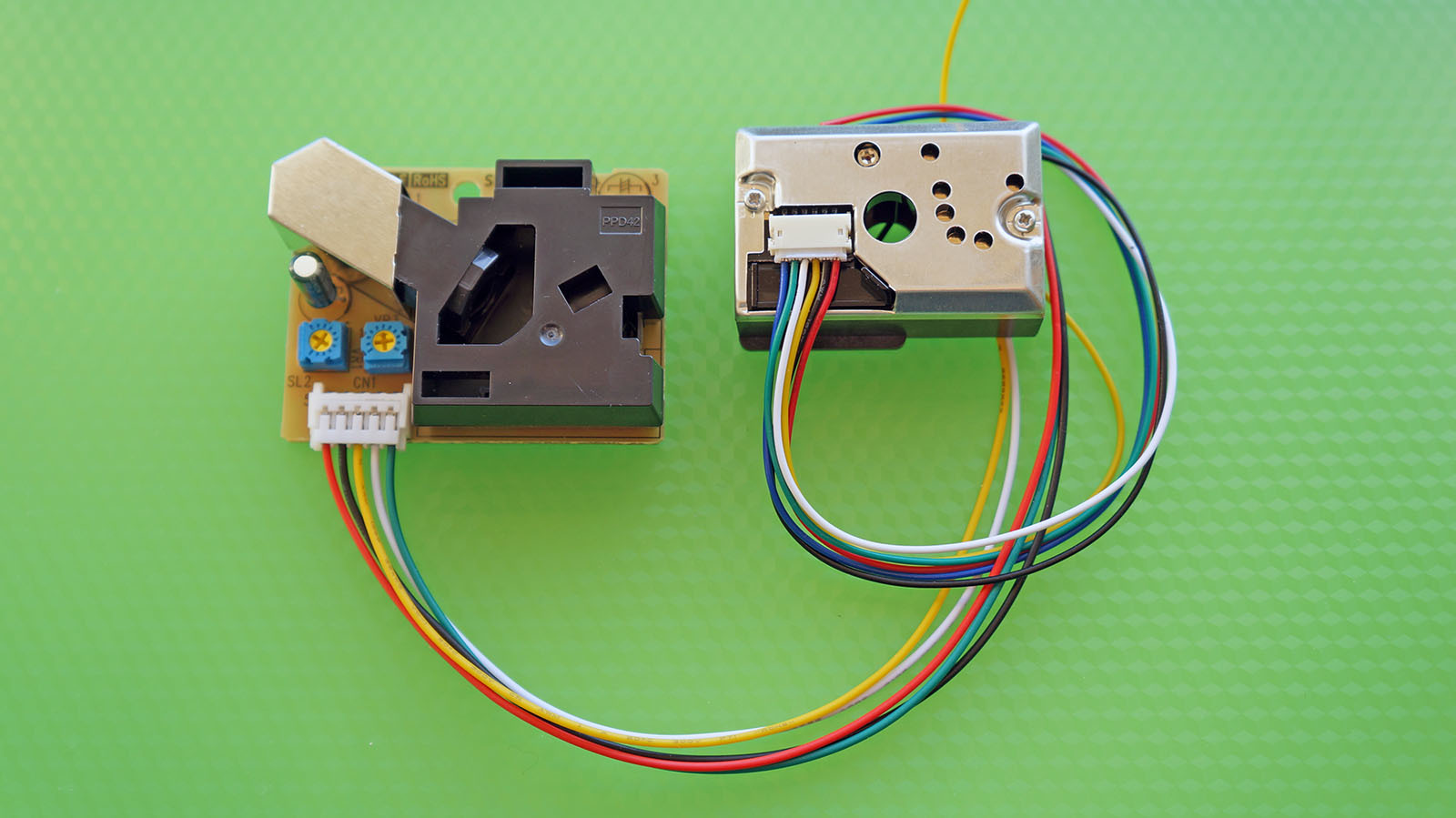 I can source sensors from this company: https://www.nano-sense.com/en/P4000/p4000-fine-particles-probe.html
Performance on paper is comparable to the cheap Chinese sensors, but these sensors are actually tested and usable for professional purposes. Prices are below €200.

I know the Alphasense OPC-N2 is used for example in outdoor sensors around Heathrow and now also in a commercial outdoor product, the AQMesh

My tests with the PPD42 so far were just playing around with only one channel attached and measurements per minute. It looked reasonable yet it did show noise. Now I’ve attached the second channel and changed measurements to 5 minute average. And then I went cooking… 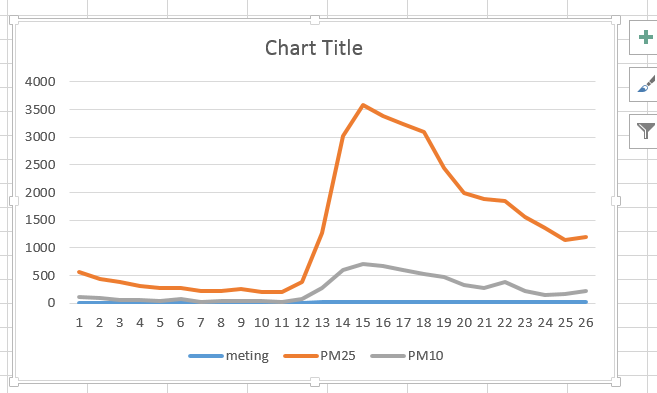 Not bad at first sight.

(Also, a Dutch health institute claims most fine dust is inhaled in one’s kitchen while, and long after, cooking…)

(Also, a Dutch health institute claims most fine dust is inhaled in one’s kitchen while, and long after, cooking…)

The first sensor of the maaspoort meet! project stayed in my living room/kitchen for a while. I can confirm that the effect is horrible at least considering the particle count. Opening my oven after I forgot to turn it off with a baguette half an hour in it was worse than new year’s eve…

Please note also the work at http://luftdaten.info/feinstaubsensor-bauen/ (they have a working sensor with ESP8266)

The LoRaWan integration is missing, but the subject matter expertise in inbuilt in this one.

The LoRaWan integration is missing 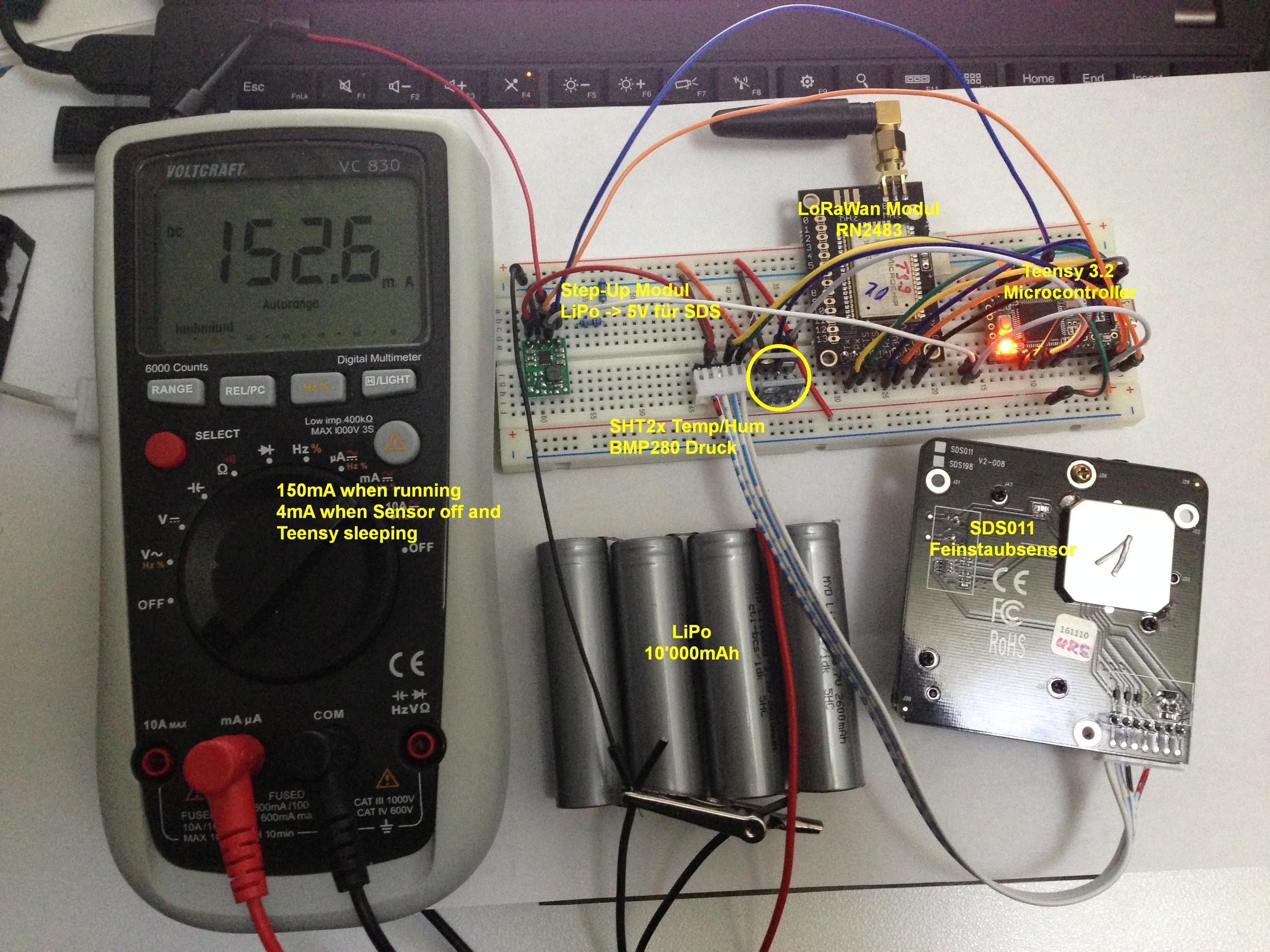 …great! Do you have a tutorial or something similar to see how it is built?

not jet. I’ve still problems creating a schematic lacking components.
I’ll publish it on github when completed.
till then https://thingspeak.com/channels/227951

Since last weekend there is a solar/akku powered particle sensor with a loarawan/ttn data connection working on the luftdaten.info map. The hardware is a mix from the workshop from Frank (https://www.thethingsnetwork.org/labs/story/workshop-creating-a-ttn-node) and the original luftdaten.info sensor (http://luftdaten.info/feinstaubsensor-bauen/). The software is pretty primitiv as well, sleeping for 10 minutes, spinning up the fan, getting some readings, sending them and going to sleep again (cycle is around 12 minutes total). The data is then processed in Node-RED and transfered via the REST api to the map.

You can find the hardwarelist, code, Node-RED integration, etc. in my github: https://github.com/Freie-Netzwerker/TTN-Node-particulate_matter 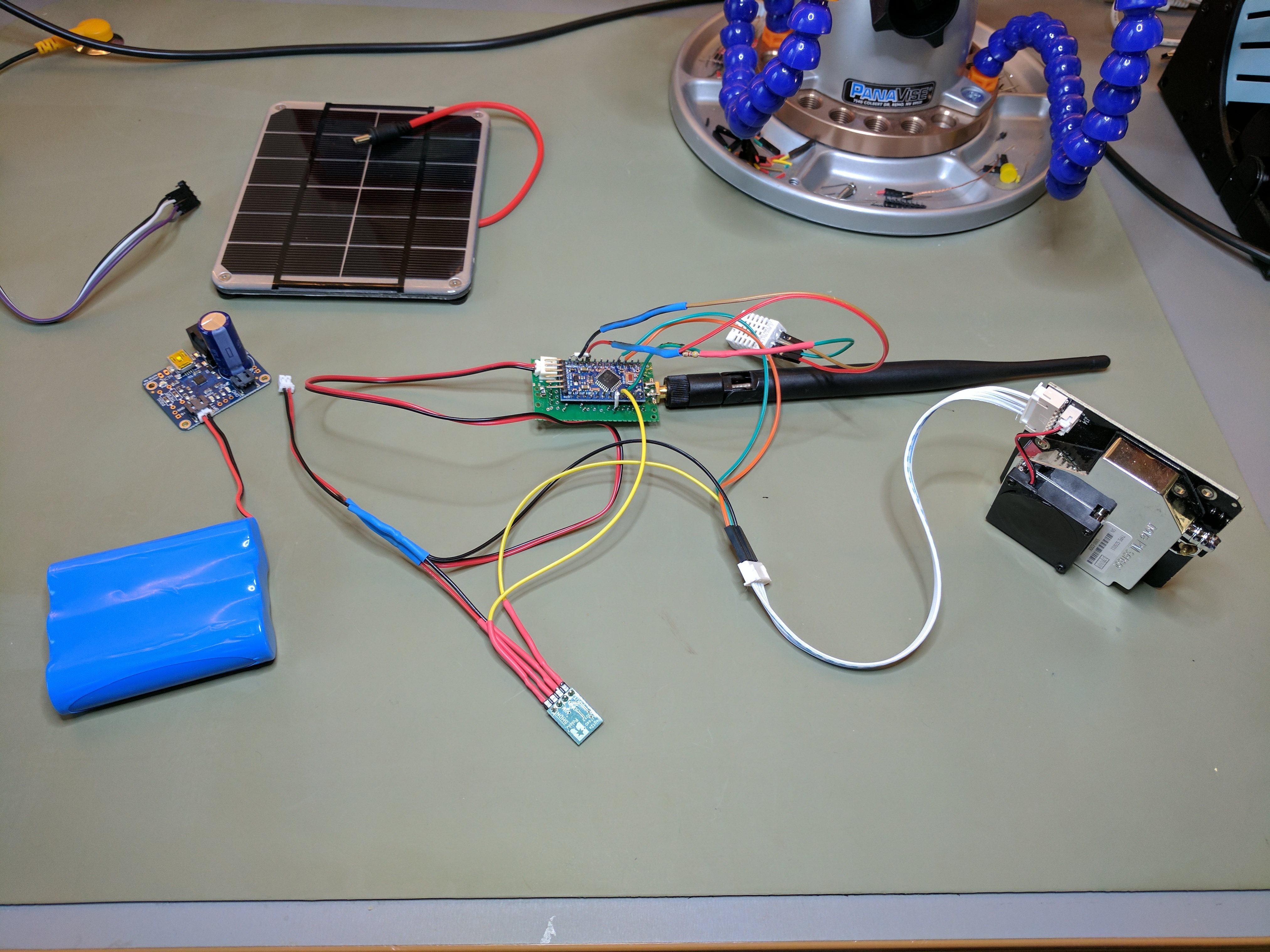 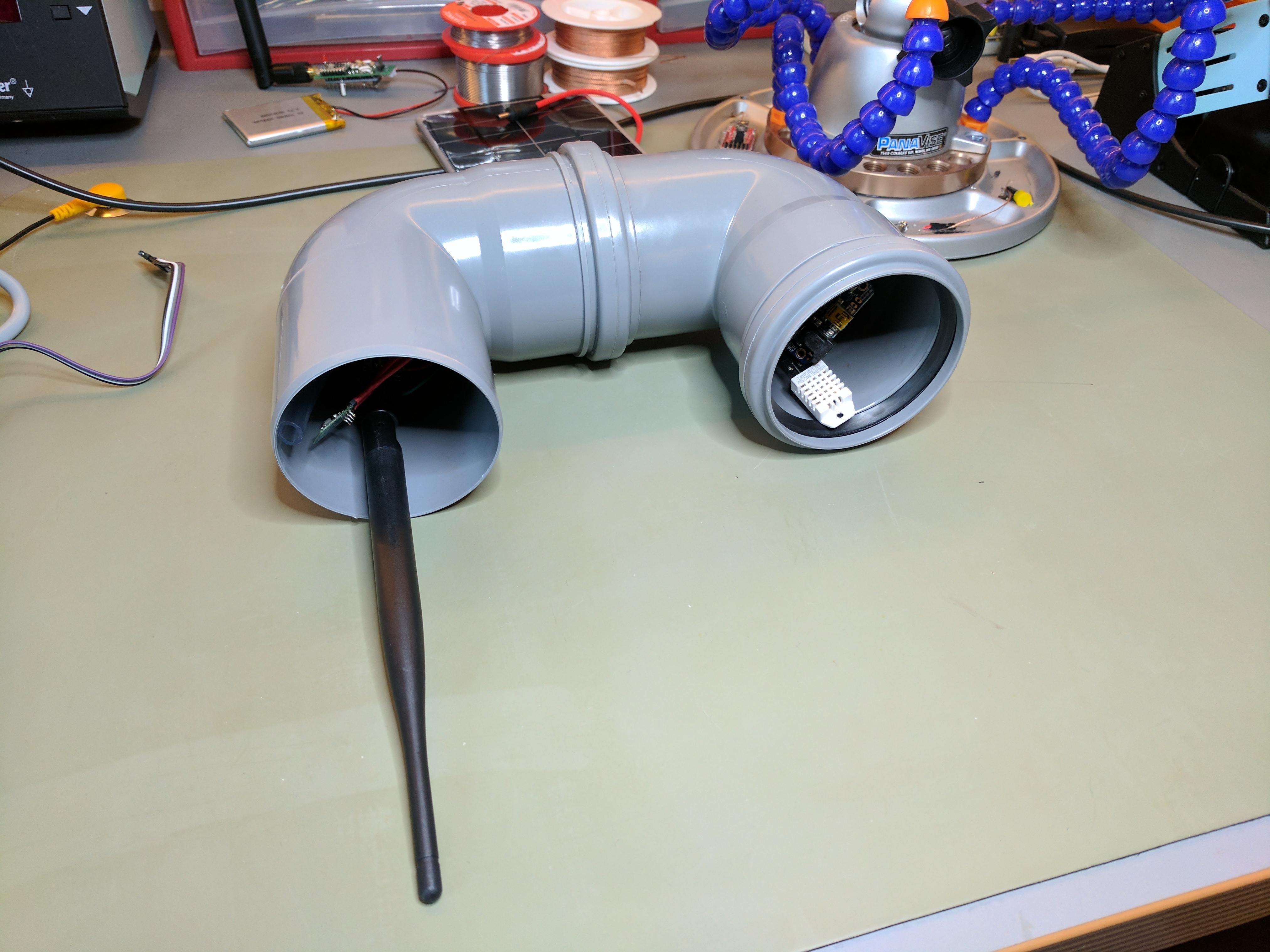 Fwiw perhaps our efforts to develop a cheap air quality monitor might be of interest, see http://ourairquality.org/ This design uses a NodeMCU/esp8266 Wifi board and the esp-open-rtos framework. It supports the Plantower PMSx003 family of sensors, and the BME280 and a few other temperature and humidity sensors. A dc3231 real-time-clock is supported as an option. Some features that might differentiate it are:

I also have this SDS011 sensor. I like to power it with a boost buck converter by the Lopy 5V supply (when only a lipo is attached) and switch it with an https://www.mouser.com/ds/2/115/2n7000-1163778.pdf that probably has the capabilities to handle the power consumption (up to 500mA). There is a power enable pin at the pytrack.

The boost buck converter I like to use is https://www.banggood.com/DC-DC-Boost-Buck-Adjustable-Step-Up-Step-Down-Automatic-Converter-XL6009-Module-p-1087346.html

Also I like to communicate with the device (optionally): https://www.banggood.com/5-Pcs-3_3V-5V-TTL-Bi-directional-Logic-Level-Converter-For-Arduino-p-951182.html

For the power enable pin at the pytrack, is that suitable to be used for the switching FET (using a proper resistor)?

At all, this would probably enable attaching more power hungry periferials to the lipo (at least for short time).

What do you think?