There should not be any difference. LMiC uses the same radio functions for both.

What is critical is that the DIO that indicates transmit complete, and especially receive success correctly change and be seen. But that is critical for any downlink in either mode.

There should not be any difference. LMiC uses the same radio functions for both.

As a result, when DIO1 is incorrectly wired/mapped, when using ABP the node can still successfully send uplink messages, while this is not possible when using OTAA.

I have succeded in flashing my TTGO with micro python firmware for ESP32 http://micropython.org/resources/firmware/esp32-idf3-20191220-v1.12.bin
Micro Python works but does not include SX127x nor LMIC library.

Does somebody knows a LoRaWAN library for micro python ?

You could check the sources of LoPy. That is a ESP32 based devices supporting LoRaWAN.

What is the reason for identifying the matthijskooijman repository; not the mcci-catena?

Good question. The reason is: changes over time while the topic start has not been updated (much) recently. The mcci-catena version was already included in a future ‘part 4’ of this topic (to be released later). Based on your response I have updated the library information in the current topic start.

At the top of this topic, under LoRa Performance, it is said:

The LoRa performance of the Heltec and TTGO boards has shown to be sub-optimal. Important factors are the quality of the RF circuitry (design) and the antennas.

There is a things network gateway some 300m distant from my node. It reliably receives uplink data. But about half of downlink data packets were lost. My node was often not hearing the gatweay.

For my TTN node I have a TTGO LoRa32 V1 with the small helical antenna pictured here.

To optimize performance I have found:

This picture shows the arrangement 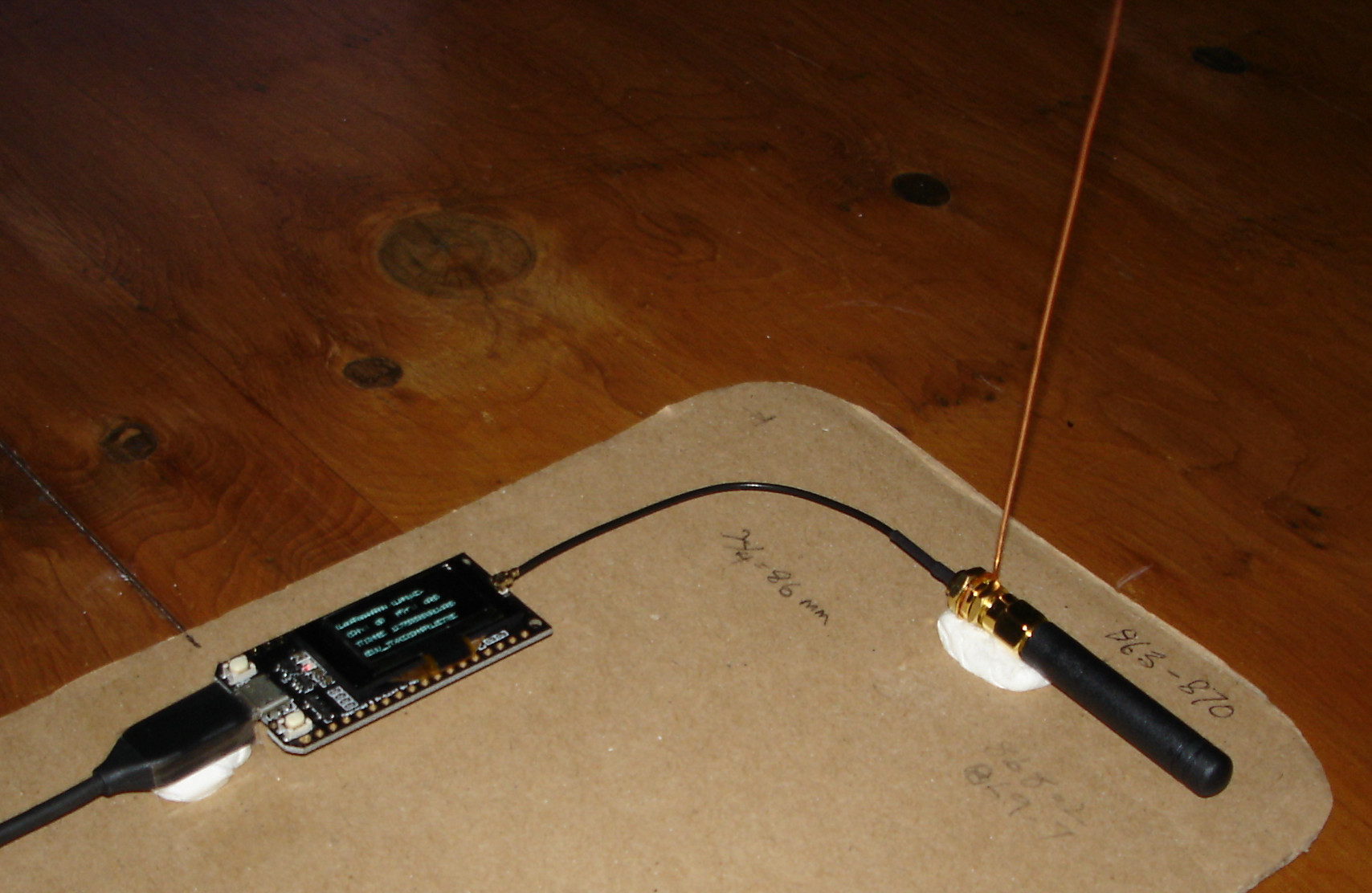 You can try https://github.com/fantasticdonkey/uLoRa .
Only ABP is supported.

While checking the board’s pinout diagram and its pin definitions (defined in the ESP32 Arduino Core) I noticed that the default SDA and SCL (I2C) pins are defined incorrectly which can cause problems.
This is explained below.

SDA and SCL are defined as pin 21 (GPIO21) and pin 22 (GPIO22), which is common for ESP32.
But for connecting the display they used pins GPIO4 and GPIO15 instead.
Vext (which is actually ‘Vext control’) controls (enables/disables) Vext external power.
Like SDA, Vext is defined as GPIO21 which is weird because it conflicts with SDA.

The following is defined in the board’s pins_arduino.h file (part of ESP32 Arduino Core):

When using the Arduino Wire (I2C) library, the ‘Wire’ object (which controls the I2C hardware interface) is initialized with Wire.begin(). Without parameters, this will initialize the I2C interface using the pins defined by SDA and SCL. To use different pins for I2C, the pins have to be explicitly specified: Wire.begin(sda_pin, scl_pin).

Vext and SDA are mutually exclusive. One GPIO cannot be used to control both Vext external power and SDA at the same time, but unfortunately that is how the pins are defined! The values of SDA and SCL cannot be changed in application code because they are defined in the ESP32 Arduino Core as const int.

During I2C communication the SDA and SCL interface pins will switch between HIGH/LOW with a frequency of 100+ kHz. If GPIO21 is used for SDA then Vext power will also switch with 100+ kHz accordingly. This is not good and the Vext voltage regulator is not designed for that.
Therefore GPIO21 must not be used for SDA but unfortunately that is exactly what happens if Wire.begin() is called without parameters.

To use pins GPIO4 and GPIO15 for I2C instead (which is how the on-board display is wired) use:

The ESP32 Wire library will remember the sda_pin and scl_pin parameters that were specified in the first Wire.begin(…) call. If any 3rd-party library later calls Wire.begin() (without parameters) that luckily does not cause the pins used for I2C to be reset to the default SDA and SCL pins.
Wire.begin(sda_pin, scl_pin) must be called before calling any third-party library initialization code (e.g. bme280.begin()).

The ESP32 supports two separate I2C hardware interfaces. The second interface is accessible via the Wire1 object which can be initialized as follows:

I2C is a shared bus that can be shared by many peripherals/sensors. In most cases a single I2C interface will be sufficient and the second I2C bus will not be needed.

About calling Wire.begin() from within third party library code

In the early Arduino days only Atmel 8-bit MCU’s were supported. These only had a single I2C interface on fixed pins. But when Arduino matured, the framework was ported to other MCU architectures like ESP32 which supports 2 hardware I2C interfaces that can be mapped to different pins. If third party libraries then call Wire.begin() without parameters this can introduce problems.

Unfortunately, many libraries (including from Adafruit) call Wire.begin() (without parameters) from library code and do not provide a mechanism for specifying which pins to use for I2C so they will always use the pins defined by SDA and SCL - unless the application initializes the Wire object (I2C interface) first. If the real (mapped) I2C pins are different from what is defined by SDA and SCL the application has to call Wire.begin(sda_pin, scl_pin) before any third party library initialization code is called.

@chote yeah know you have an good ground to this antenna.
The most important thing is a ground plane to the antenna and only the SMA connector makes this not.

A node’s antenna performance is determined by several factors:

Often the quality of these (Chinese) quarter-wave-length monopole antennas is not very high and not optimal for the frequency used. Together with the ground plane this has significant impact on the antenna’s performance. Another aspect is that the IPEX/U.FL antenna connectors have a specified lifetime of rather limited number of insertions and removals. These connectors must be inserted and removed with care, but in practice are often handled worse which lowers their quality and lifetime.

Your setup initially lacked a (good) ground plane and you have now added some ground plane, which makes your antenna more like a real dipole. The two halves of true dipoles are normally positioned in the same axis opposite of each other (not in 90 degree angle). For best results a node’s antenna should be positioned upright (which is related to its radiation pattern).

Let’s start with a huge thank you for this thread. I have been at it for a few days and need some help. My TTGO LoRa 32 v2 won’t properly join TTN in OTAA. My D1 is jumpered over to pin 33. I was getting the unknown response error so I mapped 20 - EV_JOIN_TXCOMPLETE.

My DeviceEUI and AppEUI were taken from TTN with the ‘lsb’ string showing.

My App Key was entered as is.

Do I need to configure the Device Downlink information? Any help establishing a connection would be much appreciated.

It may be useful to provide some additional information like:

Using OTAA you may try to power up the node and leave it trying to join for 20 minutes or so and at the same time watch the Gateway Traffic on the TTN Console and observe when join requests and join accepts are transmitted, what SF/BW they are using and if it will finally join after multiple join attempts.

@bluejedi Thanks for the quick reply! I have to be super close, just missing a pin number or a check mark somewhere in the gateway or ttn config.

Using the ttn-otaa.ino sketch from the library examples.

I added a case to the event handler switch to catch the EV_JOIN_TXCOMPLETE
Previously that was giving an unknown event error : 20

DIO1 is indeed wired to GPIO33

When using ABP I get see the following in the serial monitor:
Packet queued
140332: EV_TXCOMPLETE (includes waiting for RX windows)
3890356: EV_TXSTART

I would expect to see multiple join requests (‘retries’) with longer pauses in between.

I’m only familiar with eu868 so I’m not sure how these retries will occur on 915MHz and on what SF (sequence).

(The keys/IDs should be treated as secrets, not as public.)

Prior to powering up my node, there is no gateway traffic. I would hope all the data is the same regardless of frequency.

Are there settings I should be making in my gateway to play nice with TTN or do you think this is a Node problem? I am using the rak7246 and have followed the Setup Guide

Should I make edits to the Edit packet-forwarder config?

I would hope all the data is the same regardless of frequency.

This is related to the join process only. If the node is unable to join at a lower spreading factor/higher data rate, then it normally will try at a higher spreading factor with lower data rate which can reach more far. That is at least LMIC’s behavior for eu868.
In your case the gateway is near but it is still interesting to see what exactly happens in the first 15 to 0 minutes after powering on the node.

As said, I’m not sure how the join retry sequence for us915 should exactly behave when the first join attempt(s) fail.

“OTAA doesn’t work” won’t give any hints of what could possibly go wrong. Some possible causes are mentioned above already. For further analysis additional information is preferred, like the traffic log of those first 15 to 20 minutes.

Should I make edits to the Edit packet-forwarder config?

That depends on the steps in the setup guide and RAK’s installer software.
For proper configuration of your gateway I suggest to search the forum for relevant topics/threads for the RAK7246 (not this thread).

I was getting the unknown response error so I mapped 20 - EV_JOIN_TXCOMPLETE.

Yes, that bug in ttn-otaa.ino has not yet been fixed unfortunately.

According to issue 487 this should have been fixed in v3.1.0 already but it appears that ttn-otaa.ino was forgotten in the fix.

Turns out my issues were in the gateway configuration. I am able to join with my RAK811s and my ESP32s. Now it is time to write some apps. 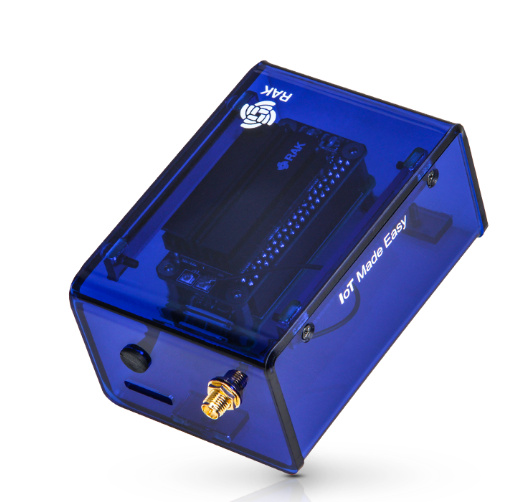 I noticed a (relatively) new board: TTGO LoRa V1.3
It appears to be an upgraded version of TTGO LoRa32 V1 but the ‘32’ has been removed from its name. I’m not aware if there have been any changes in pin layout.

The board is labeled LORA_V1.3, 20190614.
Dated June 2019 so V1.x boards apparently are still manufactured.
I wonder why they are still producing the V1.x series boards because its WiFi antenna is located inefficiently and the board was already superseded by the V2.x series.
Why an improved V1.0 and not an improved V2.0 instead? Because V1.x has more available GPIOs and almost nobody is using the compact flash slot of the V2.0?

If you are interested in one of these boards, take care that you order the correct model and version and for the correct frequency band (LilyGO has not made it easy with their naming).