Building a house, where to place LoRa antenna

I’m new on this community and I have big plans

I’m from Germany, technic freak and like DIY stuff.
I’m planning to build a house for my family (end of 2022) and planning to install a indoor LoRaWAN gateway with an outdoor antenna on the roof.
And this is the point where I need help.

It will be two family house with photovoltaic modules on the roof. The house will be build in N-S direction (with about 5° CW rotation) with a W-E roof.
Between any things (PV, antenna and so on) on the roof on my side (south part) and my neighbors house should be at least 1.25m. (fire safety regulations)
I tried to make a plan (view from the sky), see attachment. 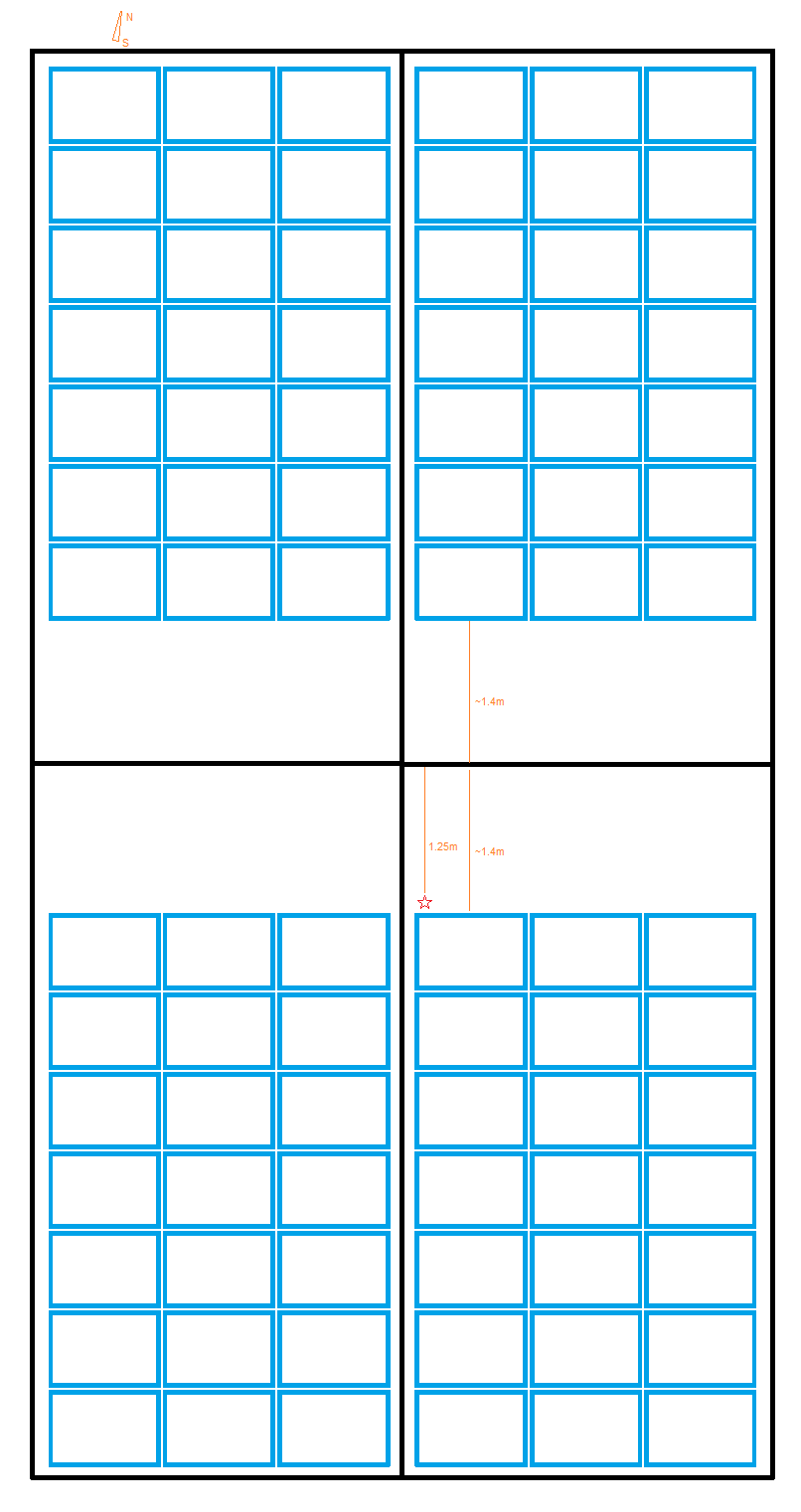 My plan is to place LoRa-antenna where the star is. Hight from ground will be about 8m. Nearly all houses in this area have similar height.
This antenna should not affect PV. The idea behind of such placement is to avoid shadow from antenna in summer in the morning (~5:00) on east side and not affect neighbors PV in winter at noon.

What do you think about it? Which antenna is the best but not expensive and not to high (may be around 50cm)?
Which gateway should I buy? I’m familiar with RasPi and Linux, but ready to use gateway will be better.
May be: RAK Wireless LoRa Micro Gateway WisGate edge Lite 2 RAK7268 ?
Is such kind of gateways future proof? (like V2 → V3 stack…) Or maybe RasPi with opensource SW is better? maybe RAK Wireless LoRa Disvover Kit 2 RAK2287-23?
Which one offers node blacklist function?
Should I wait until SX1303 becomes more common?

Gateway will be placed directly under the antenna inside the house (for easier maintenance). So I need under 1m antenna cable length.

Any other suggestions or ideas?

Which gateway should I buy?

Have you used LoRaWAN at all? If not, buy at TTIG or a Dragino with an 8 in it’s model number or either of the two RAK’s, plus two or three devices and prepare to start learning.

If you want to go for a Pi based gateway (and why not, it’s got lots of potential for typing commands in etc to get your geek-on), I’d at least get at TTIG so you have one known good gateway.

Having one known good device is always a good idea.

You are building a house and you’re worried about the cost of the antenna??

This is one of the most important elements of a gateway - the concentrators are roughly the same as they all use the same chipset - but the antenna can make or break reception.

Which one offers node blacklist function?

None of them - and it’s against the terms of TTN to blacklist anything anytime.

So I need under 1m antenna cable length.

I think this highlights why you need to try out some kit - the cables mostly come separately - so you have a gateway, an antenna and then buy the shortest reasonable HIGH QUALITY (aka seemingly expensive) cable to suit.

I’m not sure how much impact the shadow of an antenna will have on PV panels - I can’t imagine much on a whole roof’s worth, particularly as a 1.25cm wide fibreglass antenna isn’t going to cast a well defined shadow.

Have you used LoRaWAN at all?

If you want to go for a Pi based gateway

That ist the question, RasPi or not… With a alle the adaptors, cases, cables and so on it’s more expensive as Plug&Play Gateway… but more flexible…

You are building a house and you’re worried about the cost of the antenna??

it’s against the terms of TTN to blacklist anything anytime.

hm, ok. But what if some node has to much On-Air-Time or other “problems” against Fair-Use-Policy?

RAK Wireless LoRa Micro Gateway has also detachable antenna, so I can connect external one.

A TTIG would just waste your money without helping with your goals, yes you could take it apart and hack the antenna connection, but you’d still need to get good wifi coverage in the attic space and they are very much not future proof in terms of software (the software is not end user fixable at all).

The RAK boxes aren’t exactly future proof, but they work for the moment, seem to be getting updates or you can unofficially build your own openwrt system image, consume less power than a pi’s CPU (get the one with the sx1302 to reduce the radio power consumption), and if you change your mind you can always extract the expensive part (the LoRa concentrator card) and use it in something else. I might take the plastic housing off anyway if installing it in a hot location.

You’d probably want to put them on wired Etherenet, they claim to support power over ethernet which would be interesting with just one cable to run, but I’ve never tried that.

In terms of the solar panel shadowing, perhaps you could run some experiments in a similar installation with a broom stick. Only a small portion of a panel would be shadowed, but large portions of individual cells could be, and I’m not sure how they interact. Not sure if anyone still has television antennas or if installers run into overhanging trees. Maybe do some web searches and see if ham radio people have contemplated that issue.

The shadow of the antenna would be extremely well defined in the sense of being sharp, what it wouldn’t be is stationary in that it will change substantially throughout the day and during the year.

OP wants an indoor gateway as well and hasn’t done LoRaWAN yet, so having a known good gateway is always a plus.

Outdoor version is expensive.
Indoor version has no wired LAN (stability) and no external antenna connection…

I’ll start my LoRa experience with outdoor temperature sensor, like Dragino LHT65 and GPS Tracker like LGT-92-LI. GPS Tracker is why I will use an external roof antenna (to use it by my self, but also give community an additional gateway in my area)

No, they said they want to install the gateway just inside, with the antenna just above it to keep the feedline short.

and hasn’t done LoRaWAN yet, so having a known good gateway is always a plus.

But to be a sound investment, that should be the gateway they can install permanently.

And it really should be a gateway without the TTIG’s known issues.

But what if some node has to much On-Air-Time or other “problems” against Fair-Use-Policy?

That’s up to TTN’s servers to enforce or not.

I wanted to ask a question is how much data do these gateways use over the wifi or ethernet or do the antennas do all the work?

Depends on how many nodes you receive. afaik a first estimation is abt 200 MB per month.
Concerning the antenna: I use an antenna on a mast on the roof. The gateway is a Dragino LIG16 under the roof connected to the antenna by a 10m low-loss coaxial-cable.
You don’t need much antenna-gain, 5dBi is sufficient. It is more important that the antenna is high and free.

Note this question is way off topic for this thread. Appreciate you may be new but please do not hijack threads. Please also use forum search before asking a question…this subject comes up regularly in discussions. A recent example here:

Hi, there is a vague plan to cover the Hawaiian islands with LoRaWAN. Essentially up two 100 gateways could be deployed around the islands, ideally offering TTN LoRaWAN coverage on all mountains and in all valleys. The deployment would use existing cellular connections which are limited to about 20MB/month. Would that be sufficient for gateways? I’m interested in the possible traffic handling as well as telemetry used by the gateways. From my understanding a LoRaWAN package received by a gatew…

Also from your question is seems you still need to read up a lot on how LoRaWAN and TTN & associated device’s and Gateways work. Check out TTN & TTI documentation, look at some of the Things Network You Tube vid’s etc.

I found another RasPi based gateway, but a bit pricy in comparison to RAK…

It looks nice, SW is opensource and described.
They also offering SX1303 PCI-E Module, so I have to ask if it’s possible to get SX1303 with this kit.

Mikrotik lora8 Gateway, it’s a indoor / outdoor with build in antenna or you can use a external antenna.

I also has a build in Wi-Fi AP, so if you install it out door your you will cover some if not you entire yard with Wi-Fi.

Have used a few outdoor and the coverage is good. 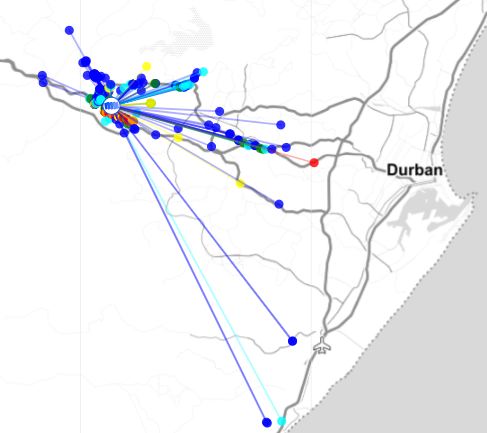 This one is on a roof and on a hill so the LOS is good for +35KM and it gives that coverage. But remember dependent on your location and the amount of Lora nodes in the area this may differ.