Can I tell on which channel an RN2483 has just sent?

Peeking into the Microchip RN2483 Command Reference User’s Guide I fail to find a way to see on which channel it will send the next packet, or on which it has sent the last.

Is there any way to tell what it’s doing?

GNU Radio? I just set it up and started looking at my nodes to learn more about antenna optimizations. 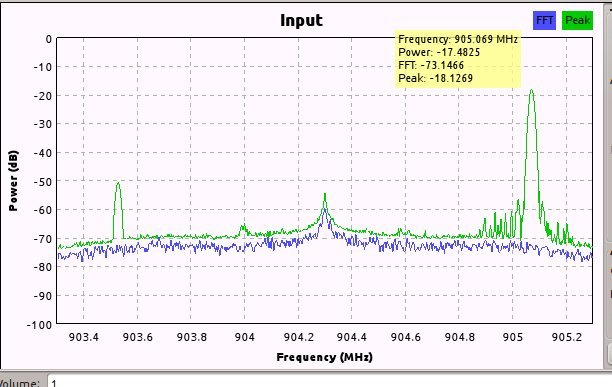 No cigar yet, at least not without modifying libraries such as TTN’s Arduino library.

The radio get freq command seems to show the last frequency that was used by the built-in LoRaWAN stack. However, as LoRaWAN opens a receive window after transmitting, its response will be the frequency used during the RX1 or RX2 receive window. The first receive window RX1 uses the same frequency channel as the uplink. But most often RX2 is used last, both when a downlink is received (as TTN prefers RX2) and when no downlink occurred at all.

So, after the TTN library returns from ttn.sendBytes, the uplink frequency has already been replaced by the RX1 or RX2 downlink frequency.

To circumvent this, one can change the library to await the first ok (after the mac tx command) and issue a radio get freq before the first receive window is opened. For the TTN library that seems to work just fine, also when downlinks are received. In version 2.2.2, right after:

ADR, Fair Use and LMIC