Can more than one ic880a gateway run behind a typical home firewall?

The reason I’m asking is because they use udp somewhere I thought. I’m setting up some other gateways and would like to test them at home before taking them to the site location.

I don’t see why this would be a problem myself, should be fine as it just traverses the NAT like any other traffic.

Let us know how you get on with your testing.

That’s my instinct as well. Well I’ll find out tomorrow I guess. I think it’s only if the udp has a fixed source address for all devices on the way out. I would not expect that from the gateway.

Thanks for your input.
Kim

Gateways not only forward packets, but also need instructions from the backend:

The PULL_DATA messages are periodically transmitted to the LoRa network server in order to inform the server of the UDP port number to which the network server should send any PULL_RESP message.

The PULL_DATA message also keeps open any firewall that protects the LoRa gateway.

The PULL packets use one UDP ‘connection’ and the PUSH (data and statistics) use another. Both ‘connections’ have their own originating ports and the back-end replies to the port associated with the connection.

Excellent! That’s what I was wanting to hear. Then I’ll run it together with my other one before I install it in the final home.

Thanks for all the feedback.

Yeah, seems to work no problem at all for me as well. At least they both show up as connected without problem in the console.
Kim

Actually… There may still be some problems with this. Not that this is a useful configuration anyway. But I see the following on the ttnmapper.org 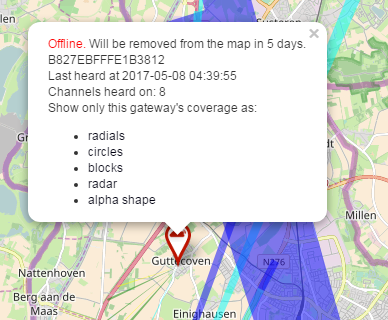 PS. The new gateway is disconnected and will go to it’s new home in Maaseik later today. But from the message in ttnmapper.org it does appear that some problems occur from having two gateways behind the same natted address even if the problem is not that it doesn’t forward packets.