The uplink Payload Structure is as follows

Each data type can use 1 or more bytes to send the data according to the following table.

Check out how @kersing sends this data in his code here

This file has been truncated. show original

Here is the code bit, you can see the first channel has 9 bytes for GPS( 0x88), and the 2nd channel has 2 bytes for the analog (battery voltage) value

This is how he sets up Cayenne here

This file has been truncated. show original

When you are at the Cayenne end, you can represent the data channel as you want e.g. an analog value can be represented as “Battery Voltage”

That code runs on the node, it would be nice if we could transform data to lpp format in the console as well. I have some nodes where changing the code is hard (nodes are deployed, 40 minute drive away), being able to reformat the data and push it to cayenne would allow skipping the additional server now required to do the same thing.

Exactly what we need, change payload content on fly, and we all are coder, we know it’s do able easily since decoder and transformer funct already exists

you have seen version V2 of lpp … bi directional

you have seen version V2 of lpp … bi directional

Yeah, but did not saw what I need, “Just A counter” I asked 6 month ago on this thread

Indeed, the idea of a decoder, converter and validator is that you can separate decoding binary data (i.e. bytes to voltage), converting units (voltage to temperature) and validating measurements (remove outliers).

We’re dropping the converter and validator in V3 as they’re not being used; you can put conversion in the decoder, and it makes more sense to drop/filter out invalid values higher upstream.

The requested feature is really being able to transform binary data to another binary format, right? You don’t really want to manually convert your binary payload to CayenneLPP in JavaScript right, just to update the Cayenne dashboard?

What is the goal? Let’s see if we can find a sensible solution that leads to that!

1 Like
Problems with Payload format tool
Payload Formats [HowTo]
ThingSpeak Integration: not all fields are being updated
Increment a state variable in payload format Converter
"Fields" not being populated by decoder?
Charles February 12, 2018, 10:35am #10

@johan
Thanks for your answer. Indeed it’s correct our final objective is to see data on Cayenne dashboard.
And for this, on nodes where we have hand, we can change the code and it’s fine
But sometimes, on other nodes where we do not have the source code and possibility to change payloads (when we buy devices) we need to convert known payload to CayenneLPP format, whatever solution is fine as soon we have hand to transform binary to another binary. JS is cool but another idea is fine, we would adapt I think.

I see. I would completely decouple the payload from Cayenne in that case.

Instead of using the TTN-Cayenne integration, consider using “Bring your own thing” and route data to Cayenne with MQTT. You can easily do this with Node-RED, taking data from TTN and routing it to Cayenne, without bothering with CayenneLPP.

Absolutely, the drawback of this is the need of another clouded server running MQTT client and some JS scripts (node red or native).
I’m fan of “less streams, less servers” => less things to check and less problems

But I will do that, got an NodeRed Instance running on my server
Thanks for the tip.

@johan
I tried your solution, unfortunately I’m not happy how cayenne handle that. While everyone is using user/pass in the MQTT broker and then ThingsID in the topic, cayenne NEEDS broker clientID set as ThingsID in the broker (and also in the topic).
This means if you have 100 devices, you need 100 different broker connexion (each with it’s own clientID). despite the fact than configuring 100 brokers in node red will be a nightmare, even if it could works, I can’t (don’t want sorry) use as many connexion as things, painfull
I know it’s not TTN fault but I’m back to my first step. I think adding the possibility to return a byte buffer from the converter will be really simple for everyone here to convert any payload.
But, I know simple for us does not mean simple for you.
If you could just think about the idea it would be very kind.

I see. It’s not the first IoT platform with that requirement. That MQTT is really designed for end device to cloud, not cloud to cloud.

Now, I would say this is the hacky solution and there’s no guarantee this API will stay available this way.

Exactly what I wanted to do, I thought if TTN can send LPP I should be able to do also just needed the undocumented interface
Thanks for sharing, since I’m doing from node red should be easy just to transform payload_raw between TTN mqtt and cayenne HTTPS post

There is indeed no auth nor IP filtering, and that is indeed what’s is wrong with this interface

adding the possibility to return a byte buffer from the converter

won’t be implemented? Currently I don’t have any Node RED running, so I can do what @Charles plans to do…

In V2 we don’t allow altering payload_raw. It will, technically, be supported in V3 but not sure if it will be GA in the public Consoles

@johan I tried your solution with no luck, may be I’m missing something

Then I send the full msg object (converted to JSON) as new msg.payload (so http request node has all original message in it’s msg.payload)

The recode function (after decoding incoming payload) is

Looks fine, output of recode (going to http request to url you mentioned) looks like OK

and output of http request (cayenne) says ok with HTTP 200 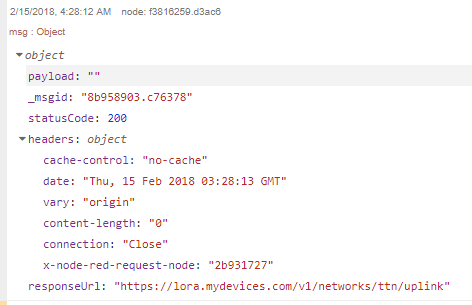 But I have noting on cayenne dashboard, and my node is created of course

I tried just sending payload_raw and hardware_serial but in this case, cayenne return 500 error so my 1st output seems good.

We’re so close, that’s it’s a pity it does not work. Do you know what field cayenne needs? Did I missed something?

Thanks for your help

I’ve not got time atm - but I would try to emulate the HTTP using postman first (just quicker to test really) This could help?

Hi! Just a short tutorial of how to use Postman API developing IDE with Cayenne’s API, because some of you asked for it. Getting an Auth Token 1. 2. 3. Click send. Getting Sensor’s Data Note!: where it says AUTH_TOKEN, just paste the...

The first thing I did, was remove the “Cayenne” integration in the TTN console.
Next I set up a node-red as you have shown.
The only thing I did differently. was change a few things in your “Recode” function
i.e. assign the correct channels to data and use this line to encode to base64
msg.payload_raw = buf.toString('Base64');
After this, I could see the values change in Cayenne
N.B. Even if the data code isn’t mapped correctly to channels, I still saw that the RSSI and SNR change in Cayenne - so that proves that it is receiving data

*edit - I also got postman to work using as follows: (the trick is not to include Payload)

For any node, this is the JSON, you need to emulate - no secret needed and you have to publicise the DEVEUI. You also “Base 64” the payload_raw from the byte array (that was set up as per the “Cayenne lpp” format)
N.B. It doesn’t seem to matter what the “metadata” values are, as long as they are there

That was the trick, noticed some strange things .

I used node base64 and json but @CurlyWurly just showed that base64 can be native I’ll integrate this in Recode function. I’m doing some check and post new Recode source code 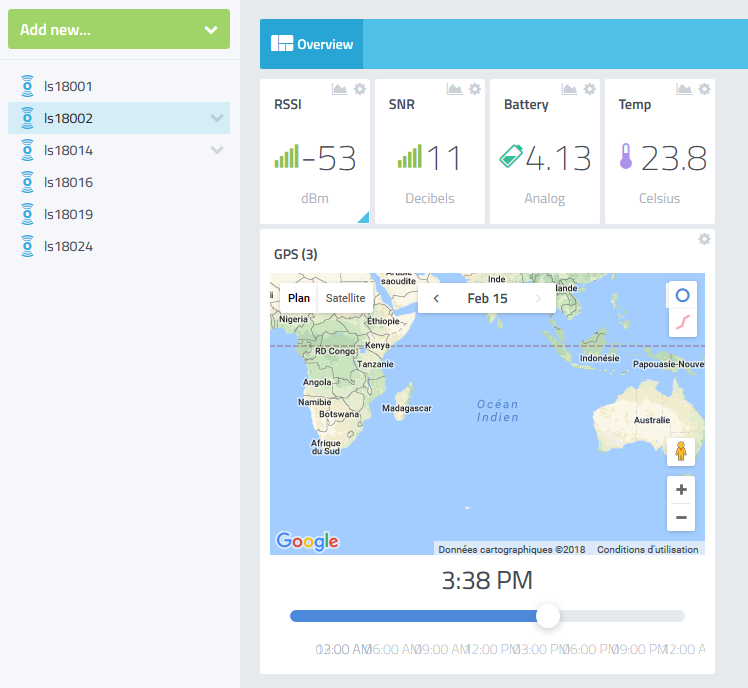 @johan you saved my day, @CurlyWurly thanks also, I just saw your post after got it working