Hi,
I have been watching videos on you tube regarding how to download data collected on the server from a device. The video showed (see below) how to collect data with curl, and also had a button to test it. But I see its for version 2, and cant see the same for version 3. Is there a similar thing for V3 ? Is there a similar thing for V3 ?

No. But the documentation shows the required cURL commands so you can do it that way.

I’ve altered the most generic & uninformative topic title I’ve ever seen on this forum - please consider that you will get better responses if the volunteers answering can hone in on their areas of expertise.

Hi
Looking at my title it’s not great , having Dyslexia makes my job a bit harder. I have been a software and electronic engineer for over 20 years , and not been easy , but have designed many large systems.

I have looked at the documentation of storage integration and don’t find it as good as earlier versions . I think if I started using it in earlier versions then it would be easier to learn, as there are good articles , and easy to follow. But jumping in at v3 doesn’t make it easier.

Hi,
I have been trying for a while to read data collected in my account using Storage Integration V3, but not having luck. Just wondering if someone can point me to where I am going wrong?

Below you can see where I activated the storage. 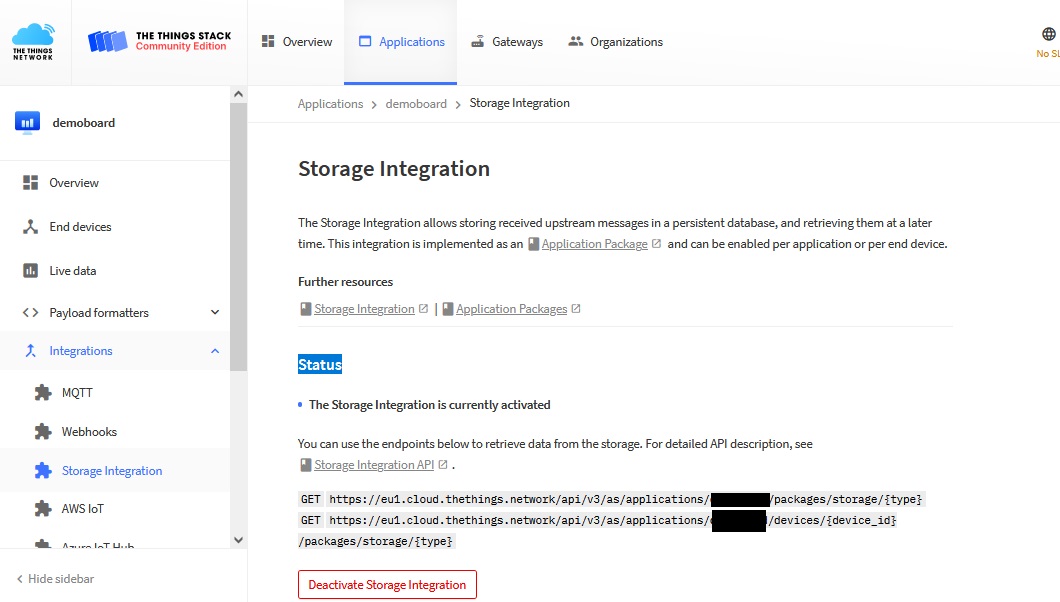 Below you can see where I setup the Key.

I have written c code to exectute curl commands as follows (I have used the curl in may applications in the past so know it works), Im not sure about the uplink_message I added below:

When I run the code it returns:

Any help would be great

Have you tried it on the command line as suggested above? See Retrieve Messages | The Things Stack for LoRaWAN

Always best to do the simplest thing first, so leave out the limit & after clauses until you’ve got it working.

Please do not open a new topic on the same subject. Please do use the tools on the toolbar to format the code so it’s readable - the </> for code - see How do I format my forum post? [HowTo]

Does limit work on its own?

Does after work on its own?

Even if you haven’t “done” Python, you could look at it even if you don’t run it - mostly because that provides a working example …

i did try both on their own as you suggested before, and didnt make a difference. But after looking at the Python, I found the limit and after on the same line as the address , and that worked. I now have:

I see each reading is JSON , and has two characters 10 after each one. Can I assume this always happens? This way I can easily decode each JSON entry between the two characters.

Curl by default does a post rather than a get - with a -G on the line as per the TTI docs it takes the -d (datas) and appends it to the URL and does a get.

As I’ve not tried curl via a C app this is a subtly that I hadn’t considered. PHP, Python and Javascript for applications, C & C++ (and a bit of Ada) for firmware is more than I can keep track of.

The docs and the various implementations I’ve done don’t have any decimals for seconds. Seems unlikely to cause an issue but just be aware of it. I normally request a small overlap in time and deduplicate as I process because the transfer to the database is buffered - so several minutes can go by without any uplinks being available - I go back 5 minutes. Alternatively use a nice rounded number like on the hour and retrieve about 5 past the hour.

Can I assume this always happens?