we have a project to control irrigation valves. In the area of application we have the following setup:

Valve controller end nodes are configured like in the screenshots bolow 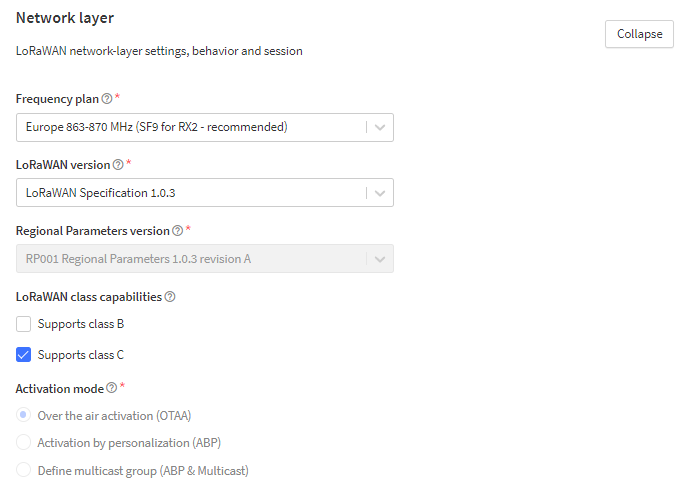 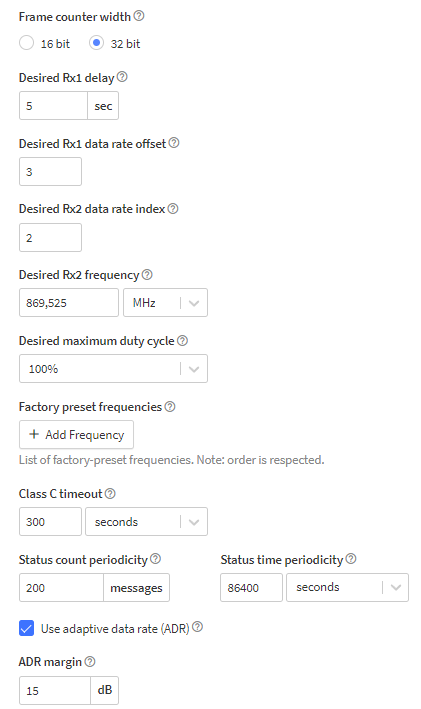 The problem is that downlinks often don’t reach an end node. However, the downlinks (unconfirmed) were successfully transmitted in the gateway logs. We need to ensure, that the end node gets the downlink message.

In a test where gateway and end node were only a few meters apart, we also found that downlinks are getting lost. So, its not only a bad connection issue.

What do the node local serial ports say/what do they see? It may be they are out of range… or

Too close to each other and shouting in each others ears, causing channel overspill and saturation…recommend several meters seperation preferably an absorber (e.g. a wall) inbetween - look for RSSI values <~45db, better yet <55-60db

What is the best practice to control critical infrastructure over LoRaWAN?

Ensure systems and connected devices are fine and safe in the case where they dont receive specific commands for reasons beyond the application and the deployed systems control… if controlling valves, etc., do they have local shut off and safety checks? WHat happens if turn on or turn off doesnt get through etc.

Can we ensure that a Class C end node guaranteed received a command via downlink or is this by design not possible?

Basically its RF - there is no guarantee of getting through (local conditions, interferers etc, risk of RF collision on air etc.)… ensure design allows for this as above, design mechanisms for getting data through after the fact - either rolling window of values being sent or a mechanism for later supply on demand from a local log at the node etc…

Can you clarify - TTI is a company - do you mean TTS OS - as in the open source edition?

If so, which version?

Valve controller end nodes are configured like in the screenshots bolow

Meaningless without knowing what the devices are - they could be on 1.0.4 which is a whole different level.

We need to ensure, that the end node gets the downlink message.

Not possible to the dictionary definition of ‘ensure’ with RF in general as a single comms channel. LoRaWAN is not suited to command & control as downlinks are an issue to all devices in the area that are trying to uplink as well as any other interference that other legitimate radio users may bring to the scene. LoRaWAN for setting settings for local autonomous control is fine if you can cope for a few hours whilst the new settings arrive when RF situation is bad.

What is a realistic latency using LoRaWAN?

On Class A & a good connection in good weather (ie not raining hard) and no solar flares, about 66% chance of being 5 seconds after it’s next uplink. Class C ditto for rain / solar / dumpster trucks blocking the antenna etc etc, about 5 seconds or any other random number depending on backhaul but it’s more about your config, the Class C spec doesn’t have any latency, you have to measure your system to find out what it is.

What should the setup be in this case (amount of antennas)?

Apart from the NS picking the best gateway to send to a device, making “more antennas” pointless unless there are dead patches but that would be for a only a handful of devices but you seem to have a general problem, if we take “more” as being better and by some scheme the “more” transmit at about the same time, you’ll make the situation worse.

What is the best practice to control critical infrastructure over LoRaWAN?

Control? DO NOT DO IT, EVER.

You can’t on any one tx. Overall, eventually, yes.

or is this by design not possible?

It was never considered in the design you are thinking of, so in a Schrödinger sort of way, it’s neither not possible and possible. It wasn’t designed out, it’s just not part of the spec. There’s too much going on in the ISM bands for any radio system to be guarantee a latency. LoRaWAN is low power so whilst its chirp can punch through a fair amount of noise & cross talk, it has its physical limits. But that doesn’t mean YOU can’t design a system that can work to a reasonable margin of certainty that runs on top of it. In the same way that cars have air bags etc, the final arbiter of the accident, or not, is the user.

Probably not the answers you were hoping for and yes, I’m being emphatic, it’s my middle name (along with Danger, obviously).

Ever since they had to send some kids down a water filled cellar at Chernobyl, no one ever put critical command & control on one piece of comms, nor do they not include some local processing to deal with the “oh dear, not good” and the “boommm noise in 30 seconds” situations. This works very very well with LoRaWAN, the device knows that it has to turn off the valve when the tank gets to 80%, it does so and phones home. You want it to fill to 90%, you send the command, a couple of Class A uplinks later it says “sure boss” and starts doing that. You want it to change the discharge rate, you put the command in, it doesn’t arrive and your firmware developer “forgot” to put in a return ack in the next uplink (no, don’t do anything confirmed, that makes the situation far worse). The tank gets to 30% and the device thinks, hmmmm, I’m mean’t to carry on but this is going to empty the tank before I get a reply to my “oh dear” alert. I know, I’ll throttle back the discharge rate until I get a message from central command. It sends the “oh dear” message but doesn’t get a response back. So it goes through a carefully thought out sequence of escalation in terms of uplinks, some of which may involve confirmations to establish if the network is still available, until it almost drains the cooling ponds, the waste pellets get warm and the west coast of Cumbria starts to glow in the dark, its radiation sensor goes off and it, as the firmware developer has never worked on anything really critical and thinks TikTok is a thing and management think a test plan is an optional extra, a bug is triggered and the Irish Sea is flooded with water that makes the fish glow in the dark.

Now that I’ve got that off my chest, next steps:

Can we have 10 RSSI & SNR’s for each device for each gateway so we can see, assuming some element of symmetrical tx/rx (not really valid, unless you can get us the values the device hears for downlinks), what the reception may be like.

Or if it’s actually irrigating GM crops or some such & you can’t share, you should look to > -120 RSSI and a SNR above 4ish. But @Jeff-UK is the radio expert - my expertise is in ranting on the forum about firmware developers half my age and, er, writing firmware. And flying planes without engines, helps focus the mind on the actual definition of do or die.

As well as the above, an actual indication of what these valves are irrigating would be useful to give context. Most plants can go a few hours without being rained on, three days for the contents of a typical garden, if it’s hydroponics, obviously that’s different but can still be run on local intelligence without stunting any growth if the message doesn’t get through for a few tries. Unless it’s a cannabis farm, then mum’s the word.

Is this a client thing? As in the client wants the valves to respond at a finger snap? If so, find & eviscerate the sales guy, it will save you so much bother in the long term.

For such a small instance of TTS, is it worth the effort of having to look after it yourself? Or is it for a poppy field, if so, your secret is safe with us.

But fundamentally, this is likely to be a local antenna & interference issue as you just don’t have enough devices to have them clash.

But if there is something outside of your control, a huge amount can be done with firmware - central commands sends message, device sends back “got that” - if not heard back, try again a minute later, rinse, repeat.

Or layer something like NB-IoT alongside so there is a whole different frequency band & infrastructure to deliver the message, that way, like Pony Express, something will get through.

Is it realistic to control many devices (100+) over LoRaWAN with a latency of 1 minute maximum?

Not if you don’t increase the number of gateways to 1 for every 9 nodes. Gateways in the EU868 frequency band are allowed to transmit at most 10% of the time (during which they don’t receive a single bit) so for 100 nodes, assuming a transmission of 0.5 second you can address 1 node every 5 seconds. Which means 60/5=12 nodes a minute in ideal circumstances without any data loss. As that is unrealistic assume one in every 4 packets is not received correctly, so 3 of the 12 get lost, resulting in a requirement of one gateway for 9 nodes…

The numbers might be different with faster transmissions, however in that case chances are more interference occurs resulting in more data loss.

BTW, the 10% is for the shared frequency for RX2 which is used for class C downlinks >99% of the time so there will probably be a lot of interference by other gateways transmitting at the same frequency.

All of the above should lead you to conclude what you want is not a realistic scenario. Redesign using the pointers provided by @descartes.