If the battery is charged and the charge current is therefore low (or zero) what will the open circuit voltage of the solar panel be ?

What are you going to do if the LiPo discharges to below around 3.0, which is the point where you really ought to stop discharging them ?

This is what the TP4056 is there for. It offers all the common protections for LIPO batteries.

What are the details of the module you are using ?

The TP4056 is actually an IC, it has no cut-off circuitry for an external battery.

If you use the TP4056 choose the right one, with overcharge protection

I am using this one. I think it is fine and has the extra chip for the overcharge protection.

Hi Guys, I’d like to introduce my new demo node, no wire, just battery powered, Arduino Mini 3.3V 8Mhz. I created a demo for a customer with a fully Temperature Humidity sensor (I2C SI7021) with Battery Level Monitor, and here it is. [image] [image] I know it’s not the smallest node, but what the deal with small nodes if the battery size is twice the node size? So I decided to test some with battery and my old ULPNode Power Efficient Library (not released yet but soon) but trust me this lib…

Does that really support solar charging a LIPO cell? I don’t think so. I’ve looked at this module before.

that’s only the power supply part

Then the module is likley using the DW01 which has a cutoff of 2.5V, bit to low for my liking, I am not the only one who seems to agree;

Why do most battery protection circuits have 2.5V discharge cap?

A far safer battery for a low powered node is a LiFeP04, there are charger boards for them and no need for a regulator.

@LoRaTracker suggests limiting discharge at around 3.0V (I’ve hear 2.8V before now also) - the board you link to looks to be set at 2.5V…is that too low/acceptable?

@LoRaTracker Thanks for your input. I actually researched this and it seems 2.5V is fine. Look at this chart https://engineering.tamu.edu/media/4247819/ds-battery-panasonic-18650ncr.pdf the difference between 2.5V and 3V is 3% effectively. Also a thing to note: The way this node is set up it will be highly unlikely that the battery will every be discharged that far anyway.

I would suggest to create a ground plane, then you will need much less tracks and it is easier to route.
The MCP1700-33 is a good choice.

I do use more or less the same components (TP4056 with protection circuit), MCP1700-33, RFM95 and arduino mini pro).
So far it is working nicely, but I haven’t yet checked how well it does work with solar charging, neither how well the discharge protection is working. Keep in mind that if using the internal oscillator for low power sleep, it has to be calibrated or it will be very inaccurate.
Maybe you would like to also implement a way to monitor battery voltage. This can be done with a voltage divider connected to an analog pin.

A voltage divider for battery measurements sounds very nice. Do you happen to have the components in mind that I would need to use there? (What values for the resistors).

I have calculated the power usage for my use case and the 55mmx80mm panel that I am using should be more than enough to always power the node.

The TP4056 is cheap, but not designed for solar charging, for that to work youll need a MPTT chip that has build in protection for overcharging and works in a cloudy environment to without damaging the lipo. 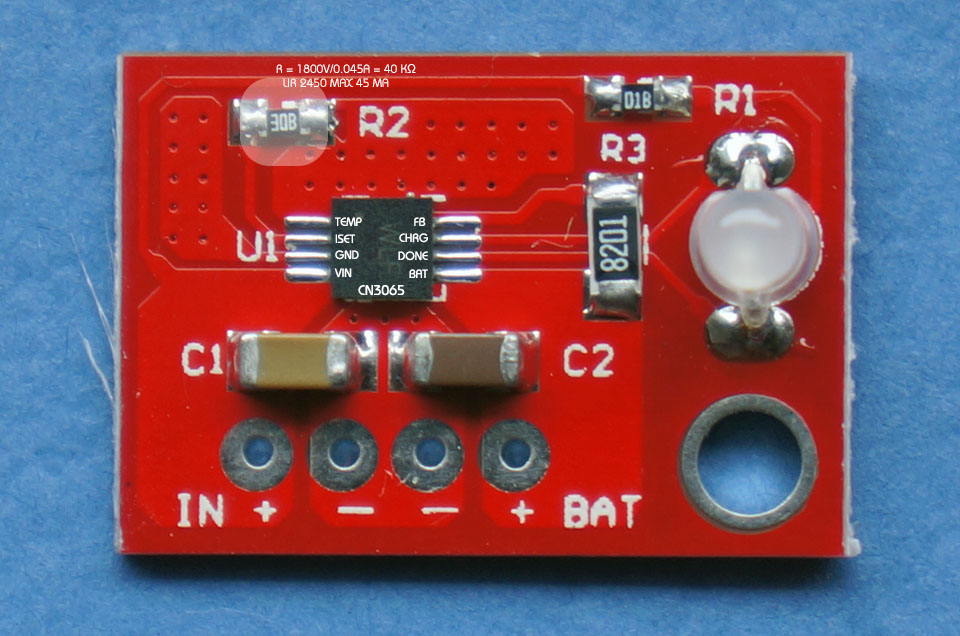 A recommended battery cut-off of 3.0V is what you will find if you Google it. The Internet can be wrong of course, but its difficult to find anyone recommending 2.4v as the cutoff.

Commercial equipment using LiPos does nopt rely on these very low cutoffs, your phone, tablet or laptop will typically shut down gracefully when the battery is low, likley between 3.3v to 3.0v. Wonder why this is ?

LiPos, when used with properly designed battery mananagement circuits, such as in phones, tablets and laptops, are safe enough and if the battery has an additional protection circuit fitted as well its a useful backstop in case the devices chargeing circuits fail, which can happen.

I also question whether LiPos are a good choice for nodes which will in general be expected to operate un-attended and un-observed for long periods. I don’t know of another battery technology that can spontaneously burst into flames some time after receiving a shock, being dropped for instance, its happened to me several times.

If hobbyists fully understand how to manage and care for LiPos and understand the risks involved then by all means use them, but it seems that all too often the prime consideration is cheapness.

I do use more or less the same components (TP4056 with protection circuit), MCP1700-33, RFM95 and arduino mini pro).
So far it is working nicely, but I haven’t yet checked how well it does work with solar charging

Be careful here. The TP4056 modules are disigned for USB 5V charging, if you want to use them as a solar charger then you need to check that the open circuit voltage of the solar panel (i.e. when the battery is fully charged) does not exceed the absolute max input voltage of the TP4056, 8V.

I agree with all of your points here. The TP4056 does work for my specific use case though (I’ve been running a node with it for over a year). A typical lora node needs so little power that there can be huge inefficiencies in the charging of the lipo cell since there will still be more than enough for the node itself. I know that the TP4056 is not a MPTT, but it works well with a 6V solar panel from Aliexpress.

This allows me to build nodes for a total of 8 bucks which is pretty amazing. All my circuitry is in fire proof boxes and even if a lipo would explode at some point, it would be contained.

I think I will design a different board with a LiFePo4 cell at some point, but for now LiPo works and if you oversize the power input a little bit this will be a good and sustainable node.

For example my node has been running for a year now and has never even gone below 3.9V. At this point I am more concerned about making the battery life shorter because it is not good for LiPo to stay at high voltage all the time.

On that note I am still very much open on suggestions on what to replace the TP4056 with. I have not found a good all in one solution replacement for it.

If you want to use the TP4056 modules for solar charging, then the solution is simple enough, put a low drop out 5V regulator, such as MCP1702, between the solar panel and the TP4056.

What was the open circuit voltage, in bright sunlight, of the solar panels you are using ?

Can you tell us which fireproof box you are using ?