How to add Dragino Lora/gps HAT to V3

No problem, the details can be overwhelming.

What SF are those packets? Because at lower SFs your node might not hear the reply. Getting your own gateway running correctly is a good step to a controlled environment where you can access logs of all important components.

Thank you for your patience. The join-request packets seem to get through at SF8,9 or 10 but not 7. So I think distance is an issue.

I agree regarding my own gateway - I’m trying to re-activate it again.

I’ve plugged in a long ethernet cable to get rid of any WiFi flakyness if any (though it never was a problem before). Currently It is stuck on Broker Connection: False at the moment as shown below. 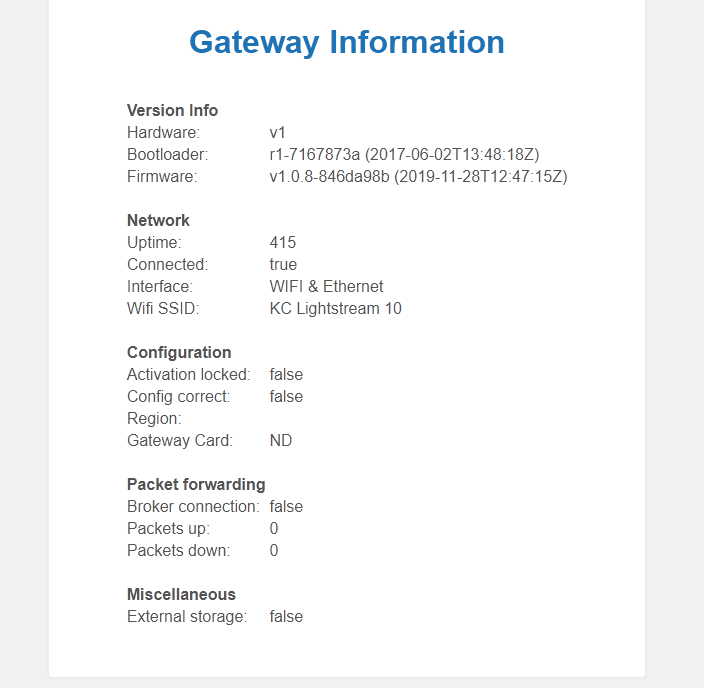 The ‘config correct: false’ line looks suspicious to me. Can’t verify at the moment but I would expect that to require a ‘true’ value.

I have done the re-activation tango and my kickstarter gw has ‘connected’ again. 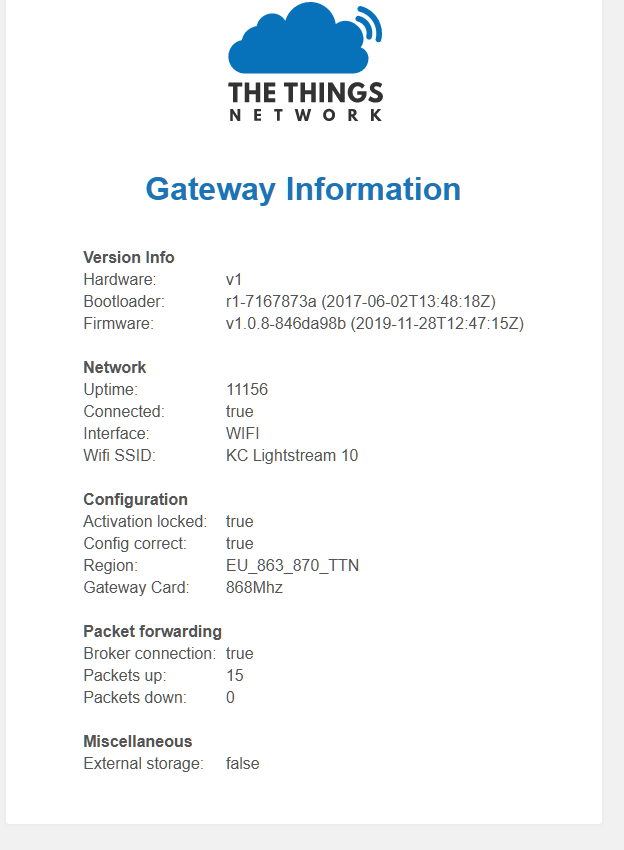 Still, it shows packets up (When I fired up my TTGO pax counter) but none down.The pax counter display told me it was waiting for a join.

The TTN V3 console shows no traffic at all - I left this console view open since , as you can see, 07:27 this morning whilst I went and did something more rewarding - playing golf.

I also put an FTDI on the gw debug port and have several hours of recorded debug messages. 99% of which are just stack status messages - and they show the stack isn’t being consumed by anything.

There are a lot of these:-

which , I guess, may be non-compliant transmissions from somewhere (not me I was on that golf course) LOL

There’s a thread about this on the forum dating back to April 22nd but it remains unresolved.

Hi, my TTG was off the past months and I dediced to make it live back on TTN. I have discovered the recent changes with v3 annoucement. Maybe I did things wrong but I would like your support: I have removed / deleted the gateway from v2. (actually the gateway was not able to connect) I have upgrade the gw with beta firmware available, to have it running 1.0.8 version which is a prerequisit. The stable version was 1.0.7 Then I have created my gateway on https://eu1.cloud.thethings.network, s…

There are some of these

Is it possible to get more info out of the debugging on the kickstarter gw?

Something fundamentally wrong here I think.

My RPi+ Dragino HAT based end-node is seen by the V2 gateway on the Humber Bridge and Live data shows up in the V3 verbose log. The Live data shows the join was accepted and a JOIN_ACCEPT was queued for sending back but I received nothing at my end. RSSI was -111 at one point so within the RFM95 spec. hence I would expect to receive something, if transmitted, but no rx_done interrupt was generated.

I also added logging to all the interrupts PayloadCrcError, CadDone etc - not a dicky bird.

I cranked the TxPower down to 1db - my kickstarter gateway saw the transmission (info page Packets Up increasing) but it wasn’t picked up by any other gateways in the area. That was intended to force the packets down to come via my gw, but they didn’t.

My Kickstarter gw (bnn-ttn-1) still tells me, via the info page, that it is sending packets up but nothing appears in the V3 console live data. And it shows no packets down at all. Can you tell if the gw is actually subscribing and not just publishing?

I built an LMIC-node using a Heltec Lora 32 V2 (and a V1) for comparison but still no join - though my Kickstarter incremented its Packets Up at each join attempt. However, there was no traffic in the V3 console for it (keys were double checked).

It would be useful to know which gateway the return message was supposed to go to for sending on to me.

If anyone has any other suggestions of things to try I’m all ears. Thanks for reading.

If anyone has any other suggestions of things to try I’m all ears. Thanks for reading.

I’m not about to part with approx £100 for extra hardware I can ill afford on my lowly pension. The Heltec is just another Arduino MCU so I don’t see the point in buying a Feather. The TTIG - well, the local community has something like 30 kickstarter gw, many as yet undeployed, which they will want/hope to use.

I guess I’ll try to install the things stack on a Pi4 as a local server and see if I can identify the problem with the Kickstarter packet forwarding. It’s a shame, my kickstarter has been, till V3, rock solid. I know others have gotten theirs to work.

Nope, you could have a day out in Bolton