How to handle an automatic re-join process?

If TTN does not lose my keys (worst case) and when restoring after a possible reset of the RN2483A the keys saved with mac save are not lost, there is actually no reason to assume why data transmission should fail. Am I correct?

And If i understood right and i would use join ABP after a reset, i have to save after each and every transmission?

In my application I want to transmit 11 bytes, let’s say every hour and I use

In this situation, I assume that the following flow chart could be the right solution?

If TTN does not lose my keys (worst case) and […], there is actually no reason to assume why data transmission should fail

It could very well still fail. It’s radio after all: even if the transmission is okay, it might collide with transmissions from other LoRa-devices or it might not be received by any operational TTN gateway. And even if received, the gateway might not be connected to the internet, the network servers might be down, and so on, and so on. But: such failure would not be caused by some mismatch in the secret keys, so would not be fixed by a new OTAA Join. (If such join would even succeed at that point in time.)

Your last flow seems to be the standard flow for an RN2483, I think. In Arduino terminology, the reset, configuration, Join OTAA and the first mac save would be in some setup(), and the Join ABP and subsequent mac save would be part of some measure-transmit-sleep loop(). So: the arrow after mac save should probably go to some sleep, and then go to Join ABP rather than to tx uncnf. I’m sure there are many OTAA examples for RN2483 (including many bad examples…). Recent RN2483 devices should support sys sleep rather than completely powering off the device, not requiring the mac save and mac join abp in some measure-transmit-sleep loop(). And beware:

How often should a node do an OTAA Join, and is OTAA better than ABP?

Your example settings, showing SF11, require ADR as it’s not allowed to use a fixed SF11 or SF12. Also, you’ll save quite some time on air, and hence lower the chances for collisions and improve battery life, when using a much better data rate. So ADR is really the way to go.

All said: of course it’s good to be prepared for disaster and human error (back up both the fixed keys, and the session keys, DevAddr and counters!), or for an explicit wish to join a different network, like if TTN runs out of funds or coverage is poor. (Either when the current network and TTN Console are still operational and downlinks can be used to send commands to the device, or when it’s totally dead. Beware that switching to a private network also needs a different LoRaWAN sync word, I think.)

Even a simple magnetic switch to allow for resetting without taking the device apart might already help if the devices are easily reached. But something automated might surely be better for some/many use cases. But then use ADR as a base: only when ADR has made the device use its worst data rate, somehow try to determine if it is not getting a response for a very long time (think days, not hours).

Do I have to set the data rate and spreading factor to a certain value when I use ADR? Or can I skip this part of the initialization in this case?

And when i join with OTAA the first time is it necessary to save the parameters immediately with mac save or after the first transmission?

I’ve copied some more reference code into How often should a node do an OTAA Join, and is OTAA better than ABP?

(The mac save should be done before removing the power.)

I want to show the procedure in a flow diagram that should make clear the necessary steps with RN2483A module. If something is wrong, please tell me that i can make a correction.

On the left side there is the initialization procedure where i can make it with a terminal program. Also included, but not explicid shown are the steps for initialisation (set datarate, dutycycle,channel frequency…) On the right side is the procedure made with a microcontroller. 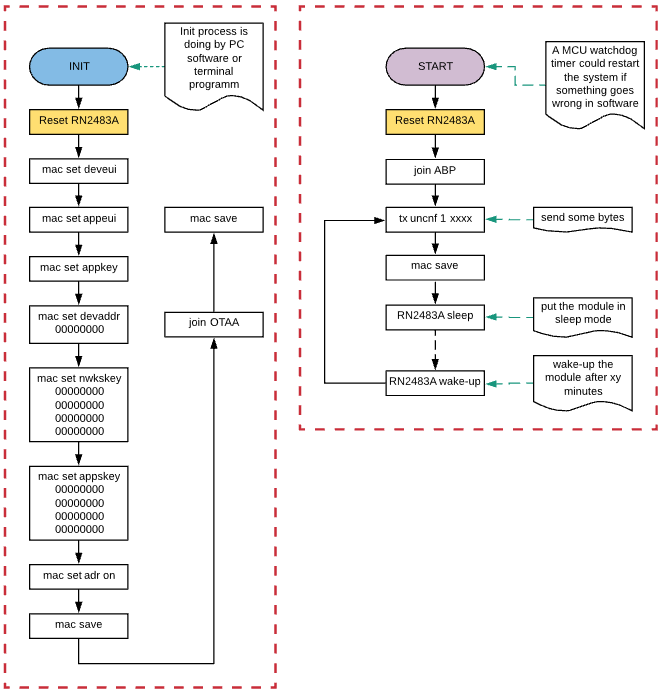 Now i have change my steps for testing like the following:

After this initialization procedure, i want to transmit some data, but it only transmit the data one times and i get some empty data in the downlink. But no further data transfers (every 30 minutes) are carried out.
If i initialize without ADR = ON, data transfer works. What goes wrong?

I tested also without putting the RN2483A module in sleep mode and It seems that i have to use mac save before i enter the sleep mode?

Is a mac save command really necessary when the module is battery powered? I mean in this case a power interruption never can be happen as long as the battery is not empty.
(Here the module is already initialized and a join OTAA process was successful) 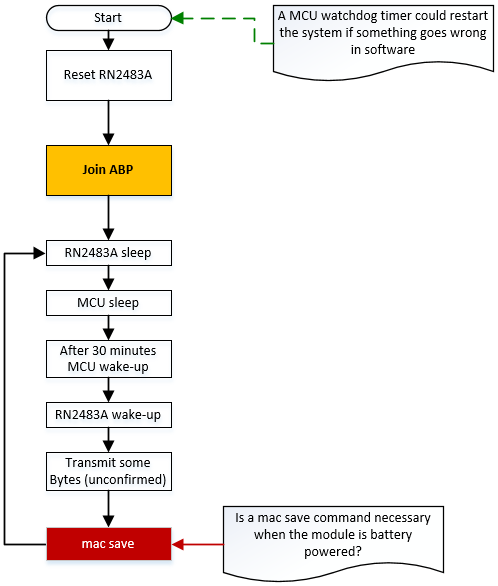 In all those cases the module will forget current keys/counters.

For your flow that means the watchdog might be the cause of a reset.