an OTAA device should not re-join for each uplink

…but I actually only read your last post, @koennetwork, so I missed that you’re getting a join error. Such error should only occur for OTAA, which needs a Join Request to be received by one or more gateways, and the Join Accept to be transmitted by one gateway and received by the node. So, the numerous OTAA attempts might just be caused by the device not receiving the OTAA Join Accept for some reason.

In other words: maybe the device will actually only join once, if it succeeds, in which case my previous references don’t make much sense.

Messages are passed by the gateway to TTN, where they are refused a join.

I don’t know the type of gateway, it’s a public one.

1 - what you can do to check if the application and your device is registered without a problem in general is simulating a datapacket :

So, the numerous OTAA attempts might just be caused by the device not receiving the OTAA Join Accept for some reason.

And the SendOTAA sketch uses:

It is my guess, that this is the cause of the problem, although I still don’t understand why the SendOTAA sketch won’t work.

Found this for the gateway in Haarlem:

It is my guess, that this is the cause of the problem

another thing is. use the latest rn2483 firmware, if necessary upgrade
for more info see http://forum.sodaq.com/c/explorer

But when using the Simple LoRa sketch, the OTAA join is accepted by TTN

Ah, that one is provided by Sodaq itself (and you’re using it for OTAA), but the other is based on an example provided by the Things Network, for their arduino-device-lib.

For both libraries you’re seeing OTAA joins in TTN Console. OTAA works with the Sodaq library, so we know that the gateway and the settings in TTN Console seem fine. (And the Haarlem gateway is a full-blown gateway.) The keys in both sketches seem to match (the TTN library takes the DevEUI from the RN2483, but that looks good too, and as the failing join is still shown in TTN Console, TTN accepts the configuration). So the handling in the backend should be the same for both sketches, if the Join Requests are simular.

Maybe the SF used for the Join Request (and hence for the Join Accept) is different; click the entry in TTN Console to see and compare the details. If it’s SF12:

Set your data rate to something other than SF12. Some RN2483 modules have issues joining on SF12.

It might also help to know if the Join Accepts for both libraries are sent in RX1 (5 seconds after the Join Request) or RX2 (6 seconds), which might be different if they use a different SF. For RX1, TTN will use the same SF as the Join Request, so SF7, which somehow might not be received by the device.

In the TTN library you can change the default SF using the constructor’s optional parameters:

I also wonder if some settings in the RN2483 are configured differently for both libraries, while it seems that the TTN library does not reset it to its factory state first (at least: the log does not show that), somehow affecting its ability to receive the Join Accept? Using the Soday “LoRa Serial Passthrough” sketch you could issue sys reset, but maybe that’s really the same as a reset caused by a power cycle/programming.

did you try to add

I added #include <Sodaq_RN2483.h> but, as expected, it made no difference. If the Sodaq_RN2483 library would have been used by the sketch and it was not included, the sketch would have thrown a compilation error.

It’s indeed SF7, but the specific Haarlem gateway just got an SF12 too. I’d assume you started with the TTN library’s version? Is the SF12 the Sodaq version? 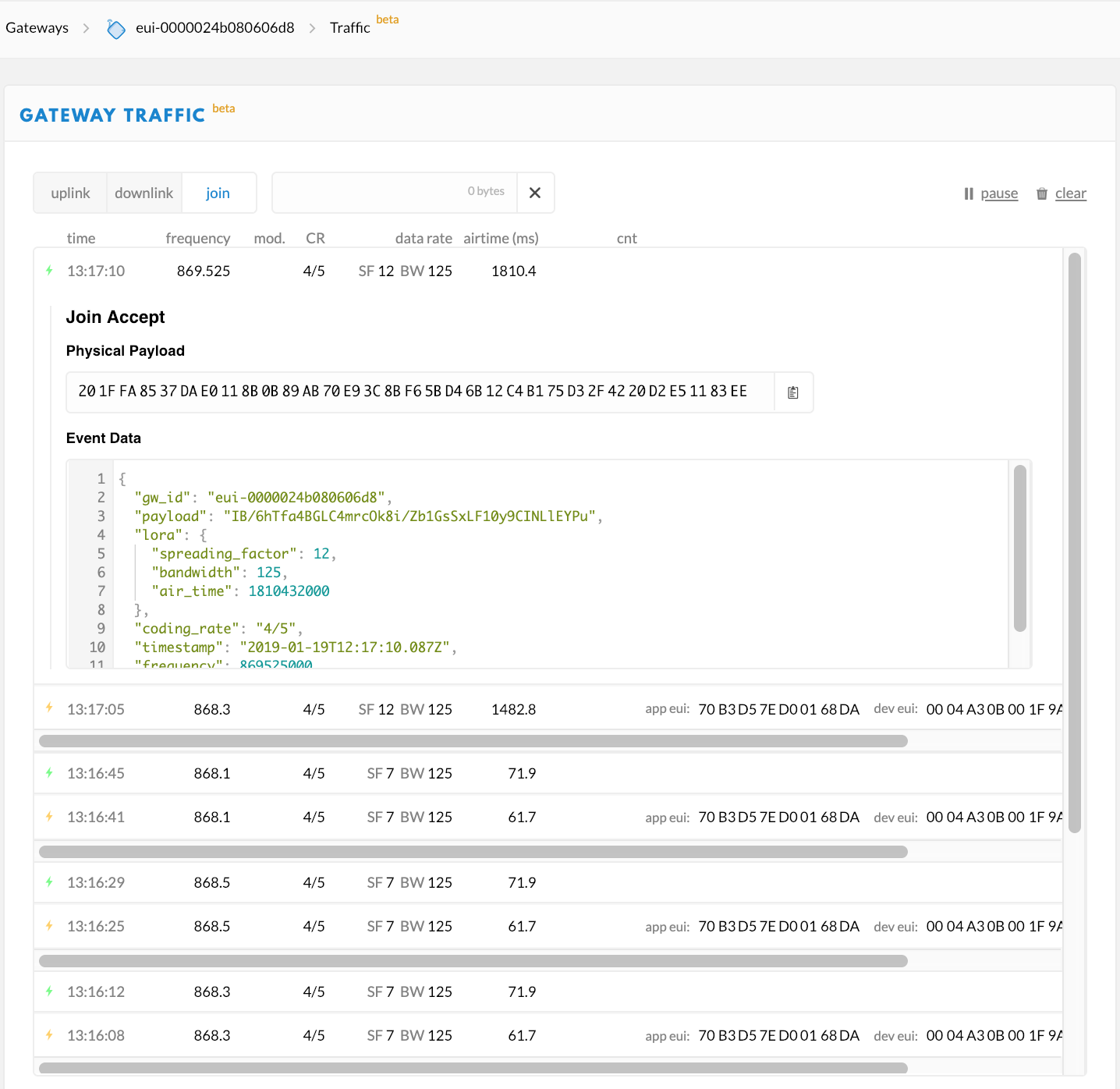 …where only the SF12 version also shows uplinks, using SF9:

and delete TTN device and application
then register again with different names.

I’m quite sure deleting and re-registering is not needed; all is fine for one sketch, but not for the other. So as for TTN, the handling should be the same, if the Join Requests are alike. The difference must be in the Join Requests, which I think is what the gateway’s Traffic shows as well.

(Or in the device’s libraries, but not caused by TTN, I think.)

because he stated that it worked before… so I’m thinking there must be a setting somewhere
in this sodaq otaa example they use include <Sodaq_RN2483.h> only

Could be a setting in the RN2483 indeed, but not anything related to TTN Console, I think.

yes, that what I mean, something persistant from previous 'experiments.

Well analyzed!
I started with changing the SF in the SendOTAA sketch. From the TTN library constructor:

Did you indeed see that SF used for the Join Request then? (I guess so.)

Maybe compare the gateway’s meta data (frequency and all) of the Join Accepts for both, when both use SF12?

Does the Sodaq library give you debug info on the serial port too?

Maybe the TTN library indeed needs a recent version of the RN2483 (though I hope not, as I still have some Kickstarter hardware that I’d hate to need to upgrade, if I ever unbox it). But 1.0.4 seems quite recent? 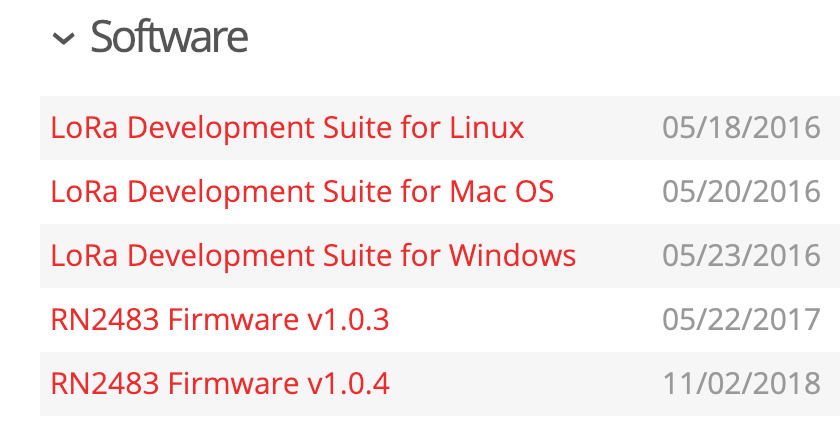 I’ve read that the following is ignored for OTAA; I hope it indeed is, as OTAA Join Accept is using the LoRaWAN default of SF12 for RX2, not TTN’s SF9 which should only be used after a successful join (and which in EU868 is also set in the network settings that are included in the Join Accept).

…but maybe that’s only ignored for some libraries:

Anyway, it might help to know if RX1 or RX2 is used. For RX1, TTN uses the defaults anyhow. But the gateway traffic shows that for SF7 RX1 is used anyhow, which uses the LoRaWAN defaults.

As an aside: the Sodaq library is probably just fine. But of course we want to know why the TTN library doesn’t work…

I’d assume you started with the TTN library’s version?

Maybe compare the gateway’s meta data (frequency and all) of the Join Accepts for both, when both use SF12?

I compared the join request logs from the console (SF12).
I see no difficulties there:

Does the Sodaq library give you debug info on the serial port too?

I’m just now trying to find out how to get debug info from this library.

I’ve downloaded the most recent version of these libraries, so that should be OK.

As for debugging the Sodaq, I guess you just need to uncomment line 26 here:

This is ERR_JOIN_NOT_ACCEPTED as printed by:

So, the text “denied” is really the response created by the RN2483.

https://github.com/SodaqMoja/Sodaq_RN2483 shows that Sodaq seems to be using the same commands, though in a different order:

So, the text “denied” is really the response created by the RN2483

That just means the module did not receive the join response it is waiting for (default response of the module to a join). After some attempts at SF12 that will lead to ‘no_free_ch’ as the retries are relatively close and going on beyond the 3th attempt would violate airtime regulations. (The module uses the 3 join channels)

This looks extremely fishy. I expect this to cause joining issues for all responses in RX2. For OTAA the default (SF12) should be used. I haven’t looked at the TTN library, is there a way to disable this?

Also, just to be sure, I would suggest a factory reset of the module. If the RX2 settings has been saved in some way a module reset will just restore that faulty setting, not the required SF12.

I’m quite sure deleting and re-registering is not needed

Just to be sure, re-registered application and device: indeed, no effect, no join with SendOTAA

Here are the logs for:
SendOTAA

Can you see a cause of the join problem?