Hi, I wanted to ask about the Kerlink Wirnet iStation. In their documentation (Commercial_Leaflet_Wirnet_iStation_V2.7.pdf) they have said that they have 8 RX Multi SF channels + 1 RX mono SF + 1 RX (FSK) (I have attached the snapshot of that section below) and 1 TX channel 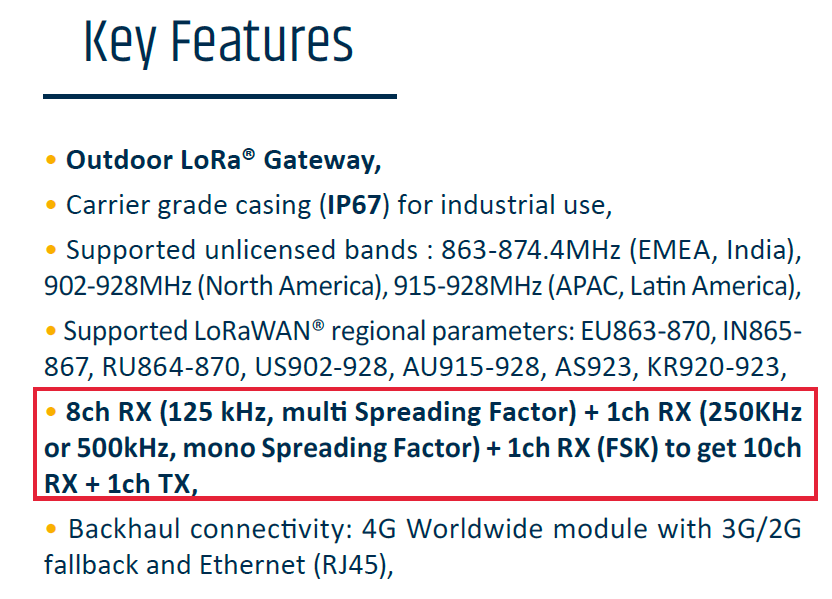 The TX Channel is fixed at one specific frequency. So suppose if we are using a Class A device (which has a timing diagram as shown in the below figure)

Any kind of help is appreciated. Thank You!

how can that be achieved?

It can’t by you - the Rx window to use is an interaction between the Network Server & the gateway it chooses to send the downlink on. Not us.

The documentation is the usual masterpiece of marketing blurb that makes this product look shinier and better than the next gateway. Reality is they all use the same chip set and all use pretty much the same core software and they all abide by the standards. So they tend to ‘just work’.

The TX Channel is fixed at one specific frequency

Who says? No it isnt!

It will work on one frequency (channel) at a time, but will vary within the permitted bands in response to the frequency channel used by the received RX1 signal or will use (fixed depending on channel plan in effect in the area) the frquency used for RX2 per plan. The device is agile and can use what it needs to meet the specification.

As a transmitter it will have to respect any local regulatory duty cycle or dwell time limits just as would a node, that is one reason why e.g. for EU868 - am unsure without a re-read of IN regs - we use the specific frequency we do for RX2 - its in a band that allows for up to 10% DC vs more normal 1% or even 0.1% in other sub bands…

They further recommended me to clarify my doubt on a discussion forum to get a clear idea.

So from what I understand from your reply the TX channel frequency and Data Rate will be adjusted according to the previous uplink channel used, in case of RX1 and for RX2 it will be according to the frequency plan like for IN865-867 RX2 is set at 866.550 MHz/(SF10,125KHz).

Thank You for the reply. I actually did not frame the question properly. I should have asked how would it have been possible to send the downlink in RX1 (i.e. if the interaction between the gateway and server leads to sending a downlink in RX1 window) in case the TX channel is fixed to a certain frequency.

Sorry about my mistake.

So from what I understand from your reply the TX channel frequency and Data Rate will be adjusted according to the previous uplink channel used, in case of RX1

Yes, as per the LoRaWAN standard that is very well documented.

Yes, as per the channel plan per the standard.

The graphic above illustrates Class A operation…now you are bringing in Class C?

Kerlink description is fine for Class C node (it needs to stay awake listening - where your OP graphic shows extended sleep periods)…it has to stay listening generally (hence not usually considered suitable for battery operation vs alternate power source) when not sending (and then listening) on RX1 & RX2.

L-A specification says support for Class A is mandatory, Class B & Class C are optional but any device supporting Class B or C must also handle Class A, the GW therefore has to also be able to operate in the way described above.

Which TX are they refering to? (We dont have your question), assume not node TX1 (leading to RX1) as again L-A requires use of random (or atleast pseudo random) use of available (typically 8 or more) channels to optimise network capacity and avoid congestion…using only 1 fixed channel isnt LoRaWAN and is frowned on (similar to SC or DCPF’s…)

They have 1ch TX on the gateway as showed in the Documentation of the gateway.

OK, up to you, I think I’ve used the "LoRaWAN’ standard bit twice now.

If you’ve got one, try using it.

If you haven’t got one and you don’t accept that it will work, don’t buy it.

But before you carry on, perhaps you need to learn LoRaWAN properly - the Learn link is at the top of this page. Then you will discover that a gateway can has only one transmitter and NO WHERE does it say in the stuff you’ve posted that this gateway is somehow superglued to a single frequency, in the same way that their product supports a wide range of Rx channels.

How do you think LoRaWAN would work across multiple vendors if there weren’t standards. Plus the whole “only one chipset” issue …

They have 1ch TX on the gateway

All GW’s have 1 channel TX! They have min 8 channel RX, but the nature of the system is that it can/will only ever TX on 1 channel at a time hence only 1 Transmitter circuit (aka channel) needed, that does not mean it is/has to be at a permanently fixed frequency. For Class C nodes need to know which (freq) channel will be used for the downlinks that may get sent outside of a RX1 or RX2 window, so that can lead to a predominent channel (freq) being used by the GW for TX… but the transmitter is agile and can operate anywhere in the target frequency plan…

Suspect the use of ‘frequency’, ‘channel’ and the silicon/circuit pathway described as a ‘(ch)annel’ in what is essentially a marketing feature list and in this thread/discussion is causing some confusion here. Recommend read up on LoRaWAN fundamentals and e.g. watch the available videos to gain better understanding of LoRaWAN modes of operation and system implementation/architecture.

May also be worth having a quick peep at the block diagrammes of the common GW chipsets made by Semtech that are used in the marketplace (SX1301 original, cost reduced (Lower temp spec) derivative SX1308, 2nd generation SX1302 and derivative/augmented demod SX1303, then all will become clear (I hope). All GW’s use these same base components depending on target specification and performance goals.

I’ve worked on gateway software and I can assure you it isn’t fixed at one frequency.

The network server which schedules the downlink will specify which frequency to use for the downlink and at what timestamp it must be transmitted. The gateway does not know whether that is RX1, RX2 or any other time for a class C node.
In the gateway configuration the lowest and highest frequencies that can be used for transmissions are specified to make sure whatever the network server specifies stays within the legal limits for you location. So if if instructed by the network server, the gateway will not transmit at 915MHz in 868MHz regions.

This topic was automatically closed 24 hours after the last reply. New replies are no longer allowed.