LMIC-node | One example to rule them all

I moved the gateway to another room and still no connection. While a device with an RN2483 works correctly

consol for RN2483 device is OK

I see the stick are not tested yet.

@Arnaudroussac
Did you get this to work?

Great work, thanks.
Well documented and easy to follow instructions.

Can confirm that the onboard display does not display. Pity.
If anyone can point out some ideas I’d be happy to try them out.

and Arduino MKR WAN 1300. The two boards I have are not supported

Adding support for Adafruit Feather LoRa 32u4 is on my todo list but I’m rather busy at the moment so will take some time.

The MKR WAN 1300 is a totally different beast. I have no experience with it but as far as I’m aware you cannot use the LMIC library with it.

Thanks, you’re right. Thanks for adding in the todo list. 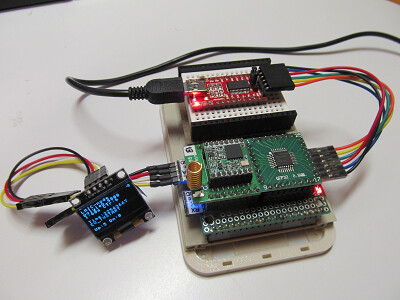 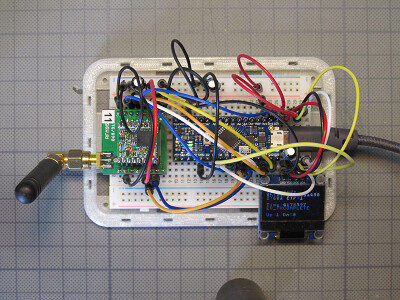 I’m working on integrating the network time request and how we do our sleep mode, which is not at all integrated with LMICs HAL yet. So it sends the first few uplinks as usual to allow LMIC to send some of its own uplinks I see getting done between first and second ones I ask for, then when it has the network time and figured LMIC has had its say it switches to a hack where the uplinks are scheduled by an alarm rather than the LMIC os stuff, and sleeps between the TX_COMPLETE event and the next alarm. Then it runs a tight loop of run_osloop_once() until the TX_COMPLETE happens. I’m wondering if this leaves some LMIC stuff not done but it’s working so far.

I’d much rather make MCCI LMIC work nicely with the AdaFruit M0 LoRaWAN board so it isn’t always awake, but that may be beyond me. The pin interrupts work, which is something.

I don’t think any of that belongs in your repo. But I will give pull requests for things I think could be worth it. Eg I’ve changed it so setup() doesn’t immediately schedule a call to the processing callback, given it’s going to be ignored while the join happens and tossed away and a new one done when the join completes. I guess this needs to be guarded by a check for OOTA/ABP in setup().

That’s the only downside I see to this - you can’t run it on a Feather M0 on a battery without solar because it’s just too power hungry without sleeping.

It would be nice if sleep support can be added to LMIC-node (repository), but the problem is that it will have to work for all MCU families and all supported boards (where possible).

Unfortunately MCCI LMIC still does not provide any sleep support (hooks/functions) to work with LMIC.
Only when MCCI LMIC adds such support, will it be worthwhile to investigate if it is possible to add sleep support to LMIC-node (repository).

8 posts were split to a new topic: Problem getting my first node working

An off-topic post was split to a new topic: ATmega4808 and Nano Every 4808 modules

Sorry for going off topic @bluejedi but looking at the latest release v1.3.0 I see the old pro mini board bsf_pro8mhzatmega328.h, just wondering if you plan to add support for Nano Every or other 4808/4809 dev boards? I like the LMIC-node but MCCI LMIC, memory etc.
Thx, G

wondering if you plan to add support for Nano Every or other 4808/4809 dev boards?

Not currently planned but support could be added if there is enough request for it.
(This will require Arduino platform and PlatformIO support and access to the hardware for dev & testing).