Hello,
I have a GW Rak 7258, which has flood probes configured. Due to coverage problems, the signals from these probes do not reach this GW well.
We have bought the same GW and put it in another location, but configuring the probes for this GW putting the same data (dbeui, appskey …) does not show any data.

Do you know what it can be?

which has flood probes configured

Does this mean you are using the built-in Chirpstack?

If yes, a device can only have one Network Server in its life - and you have now setup two.

And also, if yes, apart from being a network architectural impossibility that can’t be fixed using LoRaWAN, this would be off topic for TTN.

@Carlox Simply reconfigure both 7258’s to work with TTN instead, expand the community network in doing so, and then you only have one network server servicing both GW’s and associated covered sensors…then Robert’s your mothers brother…

yeah this will be a good idea, but this is not for me, It’s work

but this is not for me, It’s work

Huh? You asked a technical question, is the answer not helpful?

I am not using TTN, it is my own server MQTT I cannot use TTN because it is a work issue and for security reasons we have to use our own server. I know it is not a TTN issue, but it is a general LORA issue. If you could help me it would be fantastic

but it is a general LORA issue

No its not - LoRa is the Radio Phy layer…its not even LoRaWAN - as Nick says only one NS can function as host of GW and hold device registrations in a LoRaWAN architecture, you may be able to look at a roaming solution or one based on PacketBroker (which supports Chirpstack these days) allowing you to link messages between network ‘homes’…but that is one for you to investigate and read docs elsewhere as you are not using TTN it is out of scope of TTN Forum! Why cant work use TTN or (even an ‘own’ /private or hosted instance of TTI Stack? - That would partly bring back into scope…!

) If its flood level monitoring surely that is very much in Community interest?! Why make system closed/proprietary in that case? See https://flood.network/ and other examples around the world…

Do you need to subscribe to the service? Were are they based?

At the moment seems there service is down. 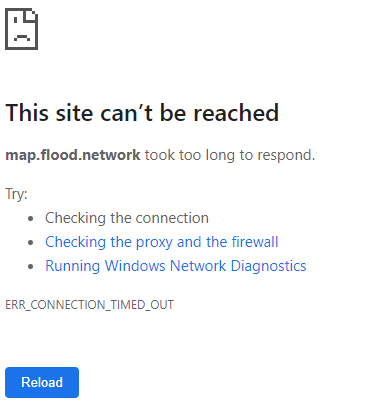 for security reasons we have to use our own server.

What is the flood monitoring for that the encryption LoRaWAN provides doesn’t allow for the use of TTN?

Your server subscribes to the MQTT server (that’s an outgoing connection, so no firewall issues) and get back text that you process.

I am not using TTN, it is my own server MQTT I cannot use TTN because it is a work issue and for security reasons we have to use our own server. I know it is not a TTN issue, but it is a general LORA issue. If you could help me it would be fantastic

There can be some legitimate reasons for feeling that way (reliability, as much or more than the privacy aspect of security). Though such a concern makes using an off-gateway network server mandatory so that you can replace a lost or damaged gateway without breaking the network.

But such a desire makes your question entirely off topic and not permitted here - not just as a matter of rules, but also as a matter of the specifics of chirpstack (including the old version called loraserver) being functionally different subject matter. It is most definitely NOT a “general LoRa issue” - you’re using a particularly LoRaWAN server, which is a very distinct subject from that of LoRa modulation, nor is that what this forum is about anyway.

If that’s the direction in which you want to go, you’ll have to seek help elswhere.