I want to be sure to order the best one so I ask here if anyone knows the difference.

Apperently there is no RFM95 and they are all RFM95W.
That is what the local reseller of these modules here in NL told me and that is confirmed by the datasheet.
So no confusion anymore from my side .

The W version is in theory compliant with internationnal rules, such as RoHS and others, enabling them to be embedded in project looking at some CE and/or FCC marking. The non W version is - in theory - targeted at market without such requirement, probably such as Chinese market. This is a general rule for HopeRF modules.

Do I understand you correctly that the RFM95W is compliant for CE marking? And as we are using the 868MHz band I am wondering what the CE requirements are. Does anybody has experience with the CE stuff? 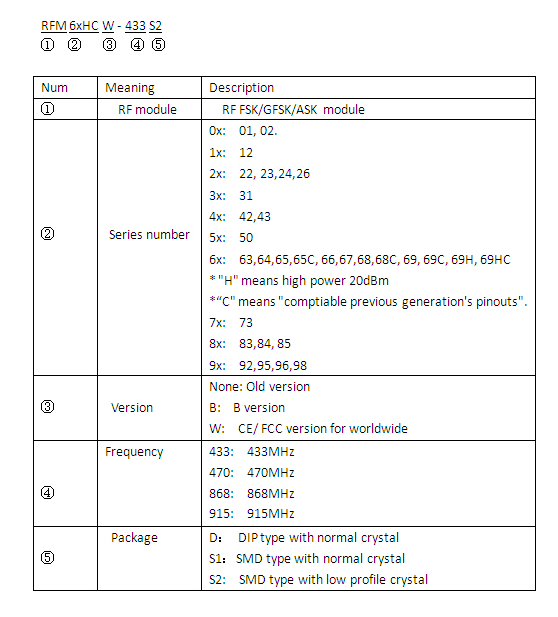 The RFM95(W) Data Sheet makes no difference between RFM95 or RFM95W.

W= worldwide version, without W=internal Chinese market only.
I think the process and quality checking is more stringent for the W version, just my guess.

What is your source for “without W = internal Chinese market only”?

RFM95 (without W) is also sold on AliExpress which is targeted at non-Chinese markets.

Those without W are meant for Chinese market. If they are sold outside of China, those are considered not legal and probably bought from local market but resell on places like Aliexpress. That is what HopeRF told me.

I bought some RFM95 on AliExpress. They are cheaper than RFM95W but appear identical. Except for a blue marker dot on the bottom side near the “W”. Maybe there was a difference in the past but not anymore, except for that dot of blue marker (which anyone can either put there, or remove with some alcohol).

They are cheaper than RFM95W but appear identical

…but you also posted that table from HopeRF’s website, in your earlier answer…?

Yes, and?
That table says ‘no W’ = old version and ‘W’ = CE/FCC version for worldwide use.
It does however not mention if the modules have any differences or that they are equal.
(Nor does the datasheet which I repeated.)

Without having seen the internals, my personal impression is that they are exactly identical.
The ‘W’ version gets an extra dot of blue marker ink on the bottom indicating that it is a ‘W’ version
and then probably some small fee will have to be paid in order to carry the CE/FCC compliance logo.
There is no CE/FCC logo printed on the RFM95W however. I presume this is what the dot of ink near the W actually implies and the RFM95W’s CE/FCC compliance is probably stated in some document.
It’s a guess but I think it’s close to reality.

They are TCXO version of the RFM95W. Hence more expensive. On a regular RFM95W, it works at best on the borderline at 125kHZ and SF=12. And not reliably at these settings especially when your data is slightly longer. These are made to order on MOQ. After testing them out, it then works reliably at BW=125kHz and SF=12. But although claimed to work down to 62.5kHz, it doesn’t work for me. And one more drawback is the sleep current consumption as the TCXO circuitry doesn’t have a shutdown implementation, so it consumes 600uA during sleep.

Hoperf have two teams one for over see and another for domestic, some times the customer from outside China will manufacture the product at the China mainland the will send the BOM to the manufacturer and the manufacturer will find the part from Hoperf to avoid the interest conflict of two teams “W” means from Oversea team without “W” means from the domestic team. but the module with “w” and without “w” is no difference.

A post was merged into an existing topic: BIG product placement allowed topic