Great correction, clarification and tutorial - thanks.
This depth of complexity around antennae that work really well is exactly why I personally stick to buying antennae from good suppliers! 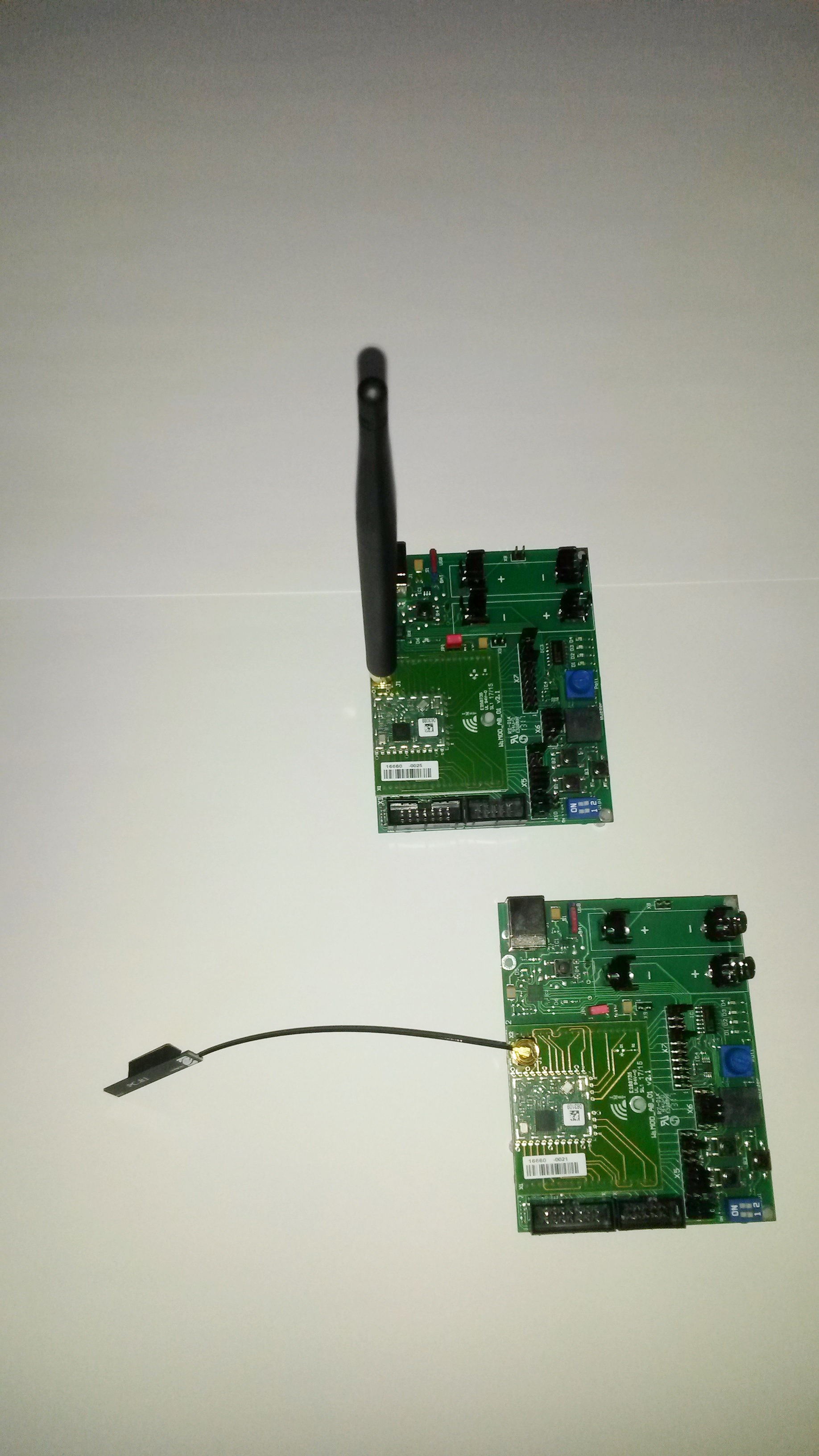 The picture shows 2x IMST iM880B modules on development boards. One has the IMST dipole antenna supplied with the module and the other has a Taoglas PC81.07.0100A.db PCB antenna.

The Taoglas antenna is what Texas Instruments describes as a “meandering monopole” antenna and is often called a PCB trace antenna. Per an earlier posting, PCB trace antennae are among the most “popular” for devices.

I was interested in the performance of the Taoglas antenna vs. a “standard” dipole. BIG ANTENNA vs. SMALL ANTENNA!

I used the IMST LoRa Radio Link Test system to run long (hundreds of packets) repeat tests outside in the open, away from any clutter, at 10m distance. TX power +17dBm.

Using the IMST dipole antennae at both ends I got very stable downlink/uplink RSSI of -53/-53 dBm and SNRs of 7/7 dB.

Using the IMST dipole antenna at one end and the Taoglas PCB antenna at the other end I got very stable downlink/uplink RSSI of -72/-73 dBm and SNRs of 8/7 dB.

The philosophy for using such antenna’s as the taoglass and other small dimension antenna’s is to be predictable. These types of antenna’s are not much influenced by objects in close proximity.

Standard antenna’s like a full dipole are less predictable when used near objects. Many objects like metallic or watery objects, including human bodies, will detune the antenna so that the gain and pattern vary widely, making the reach unpredictable.

In certain applications a shorter but predictable reach/distance is more desirable than a less predictable and varying reach/distance. So the small antenna can be a good choice for certain node’s. I think f.i. as a sensor in garbage cans.
So the designer/manufacturer makes a choice for a certain antenna.

People who own a gateway usually like to have a better range so they must use a full dipole or better type and place it (far) away from other objects, with line of sight in the preferred direction.

I will carry out an 868 Mhz small rubber antenna test soon, with models listed below.
No professional test, since i do not own proper measurement equipment. I will use 4 Heltec LoRa 32 boards running with same software to achieve comparable results. 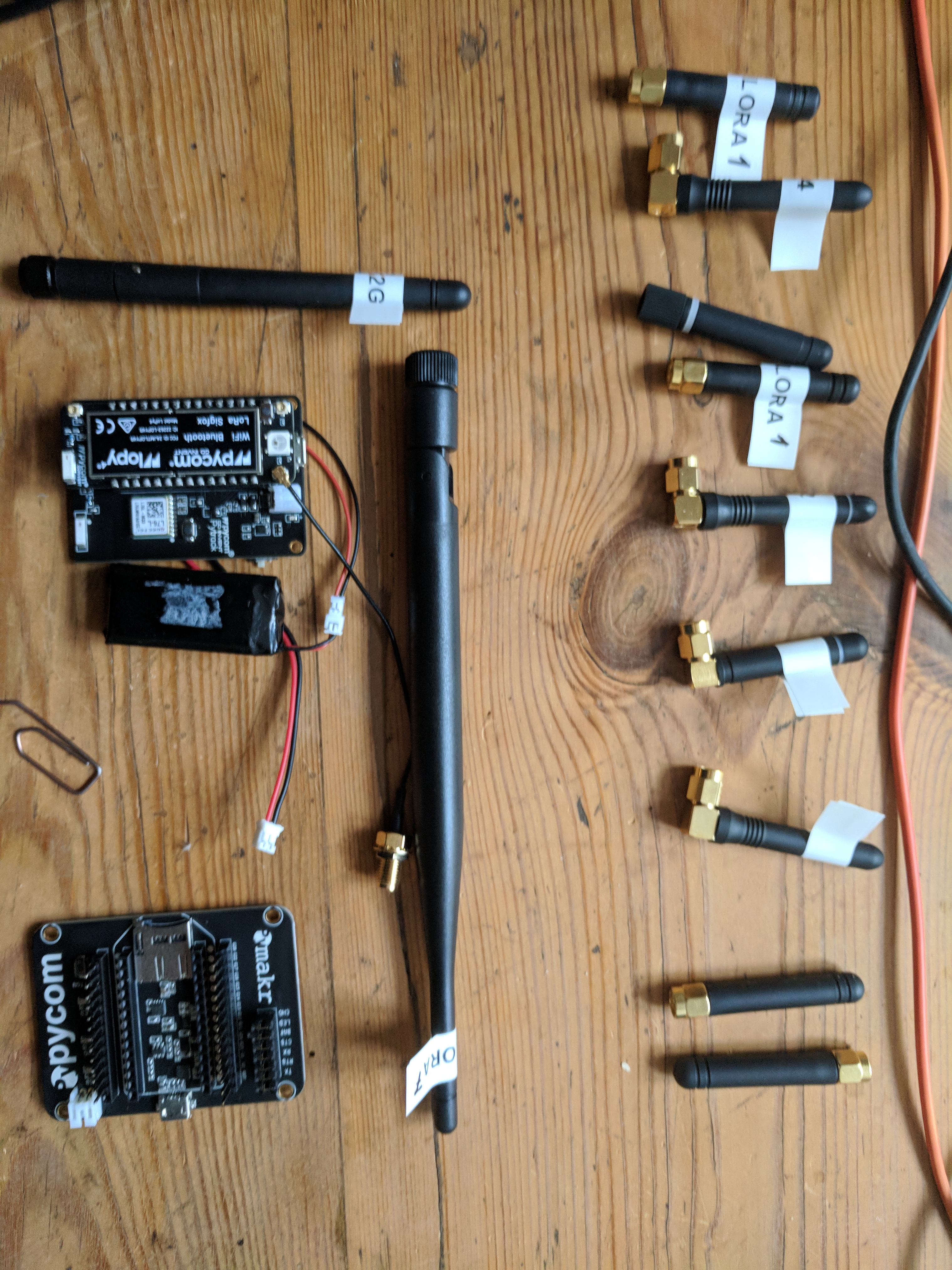 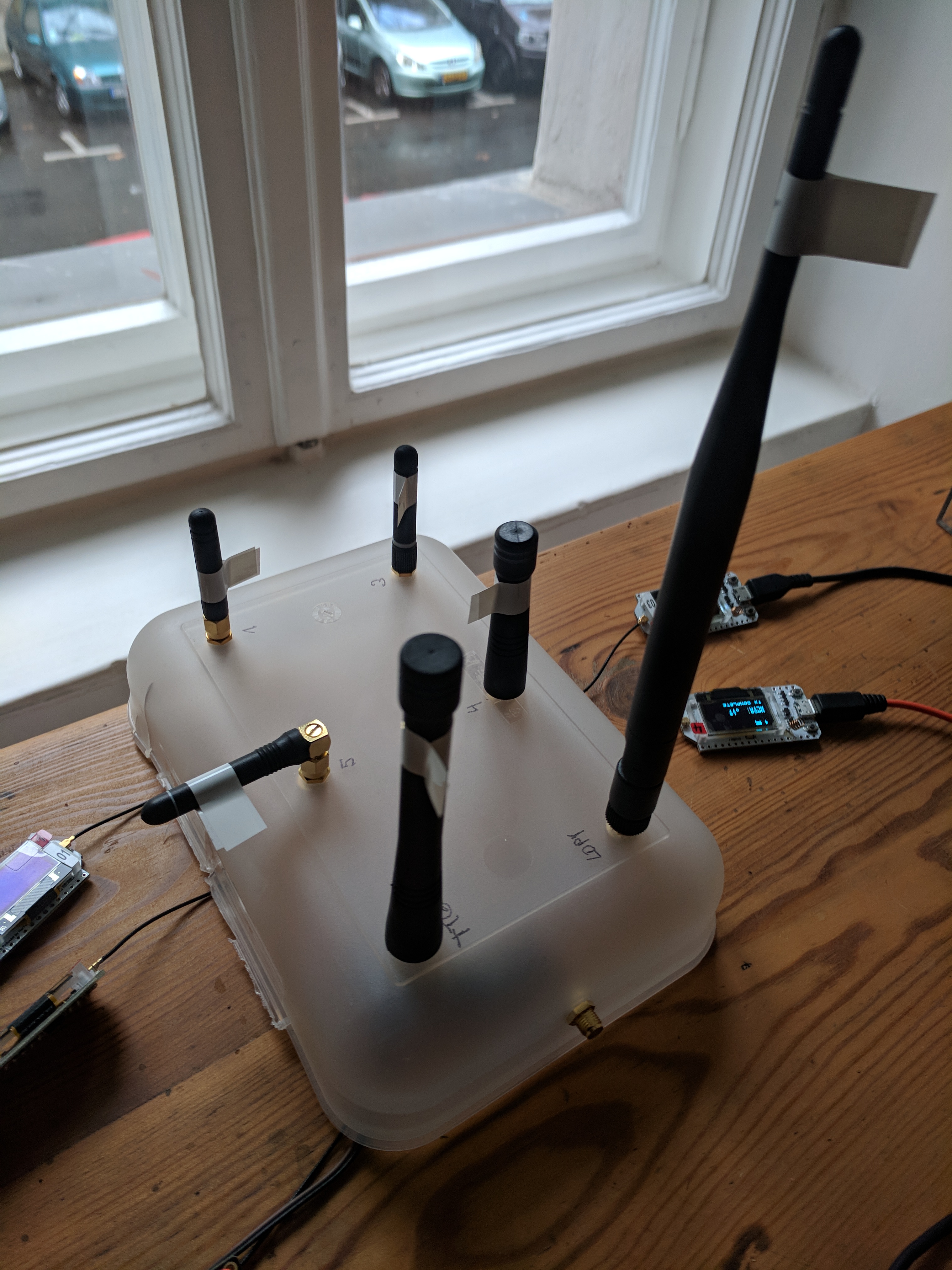 Make sure you can connect to your LPWAN network with this LoRa & Sigfox Antenna kit. Use with the LoPy or the SiPy IoT Development Boards. 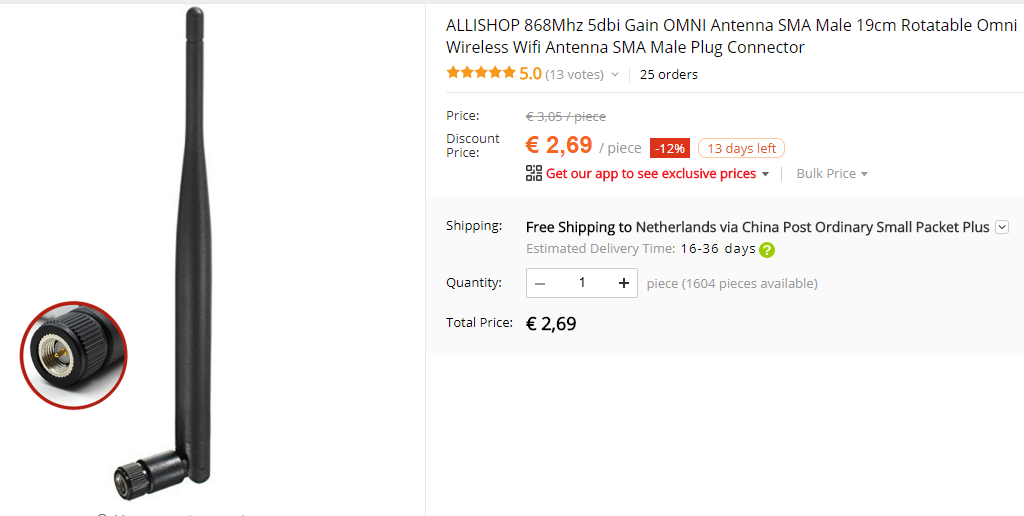 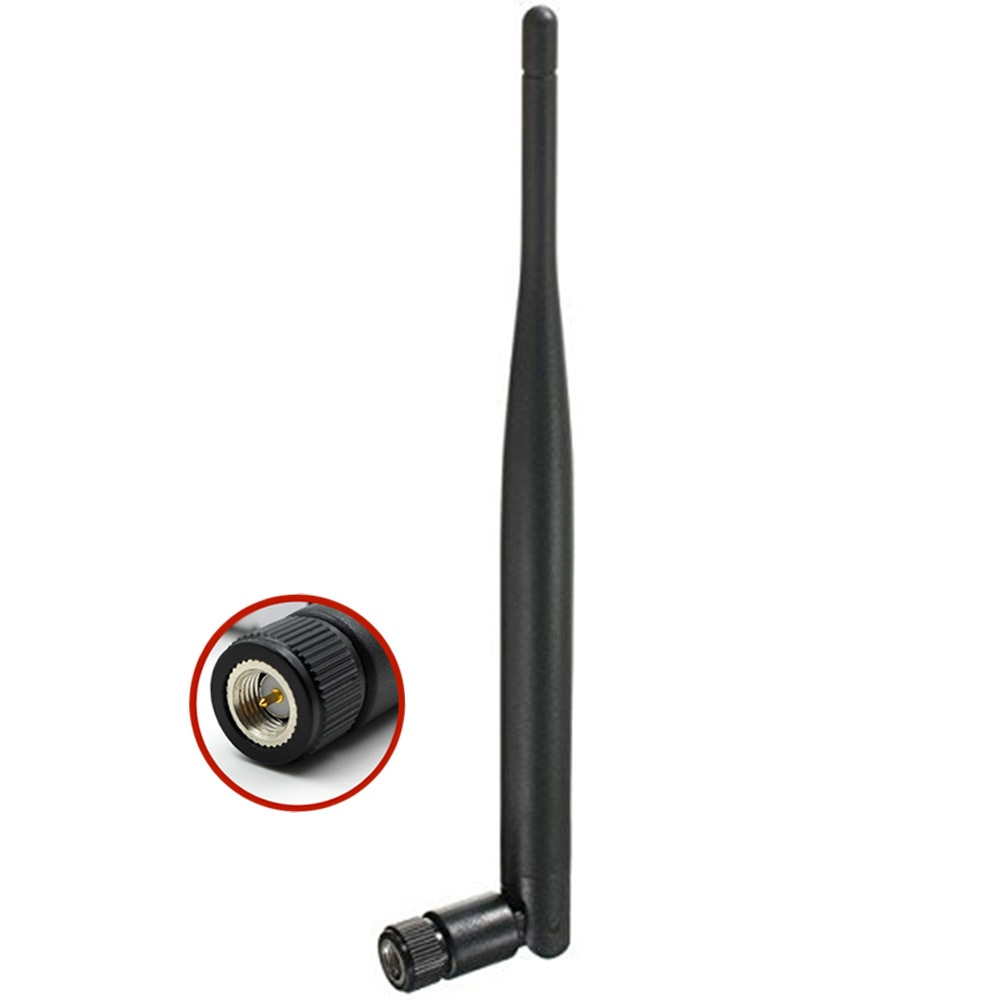 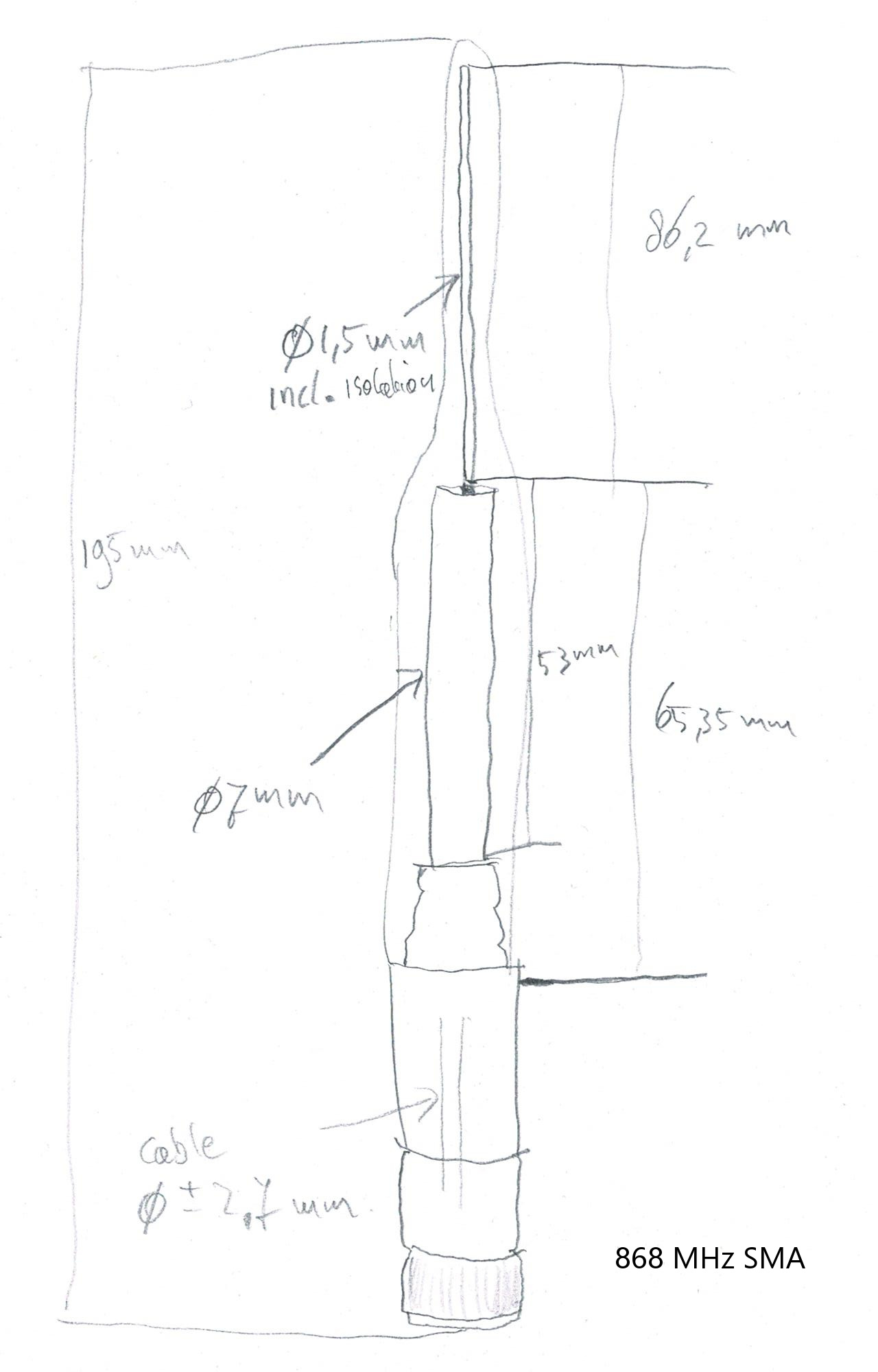 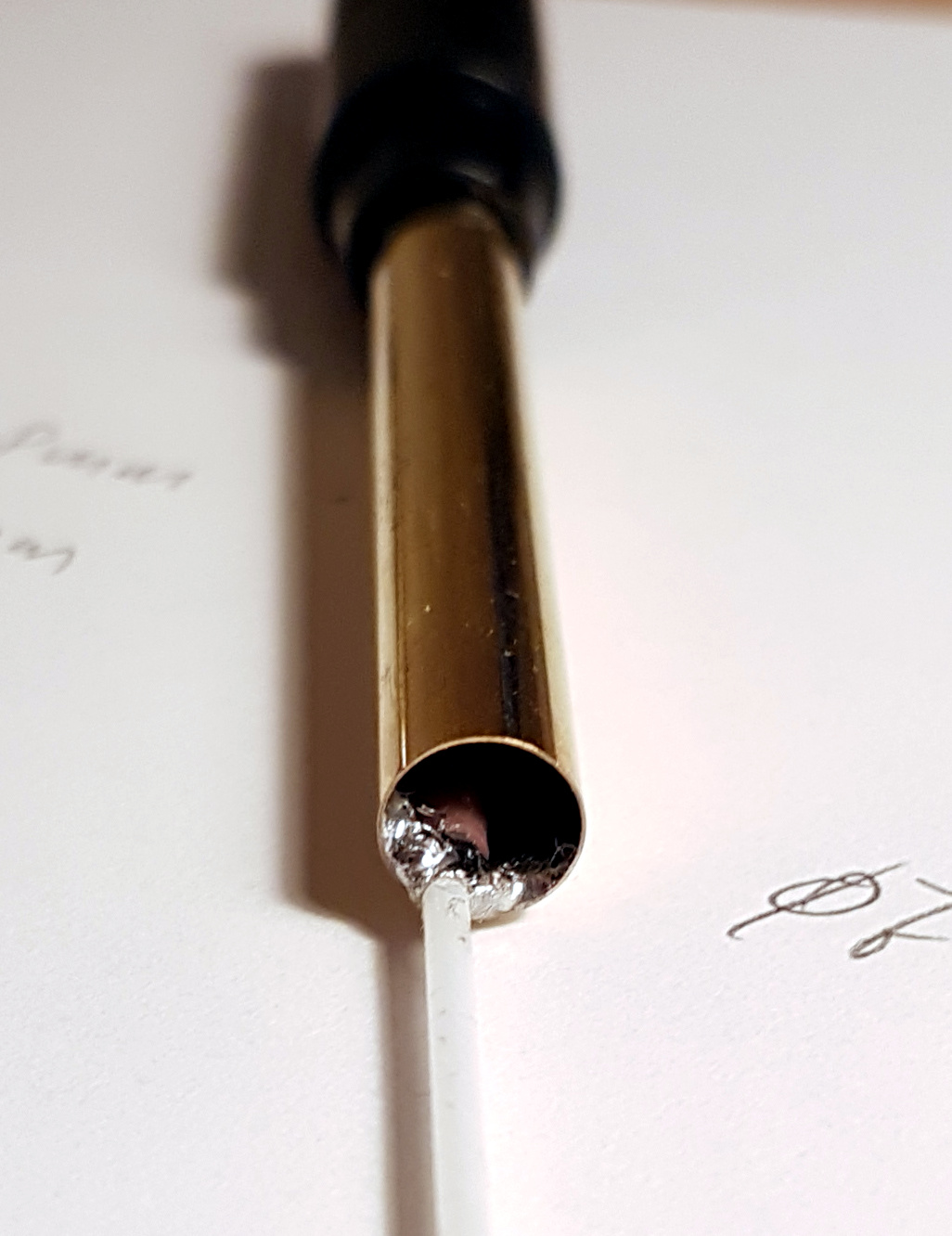 The version from Heltec was 2mm shorter (either by design or accidental). 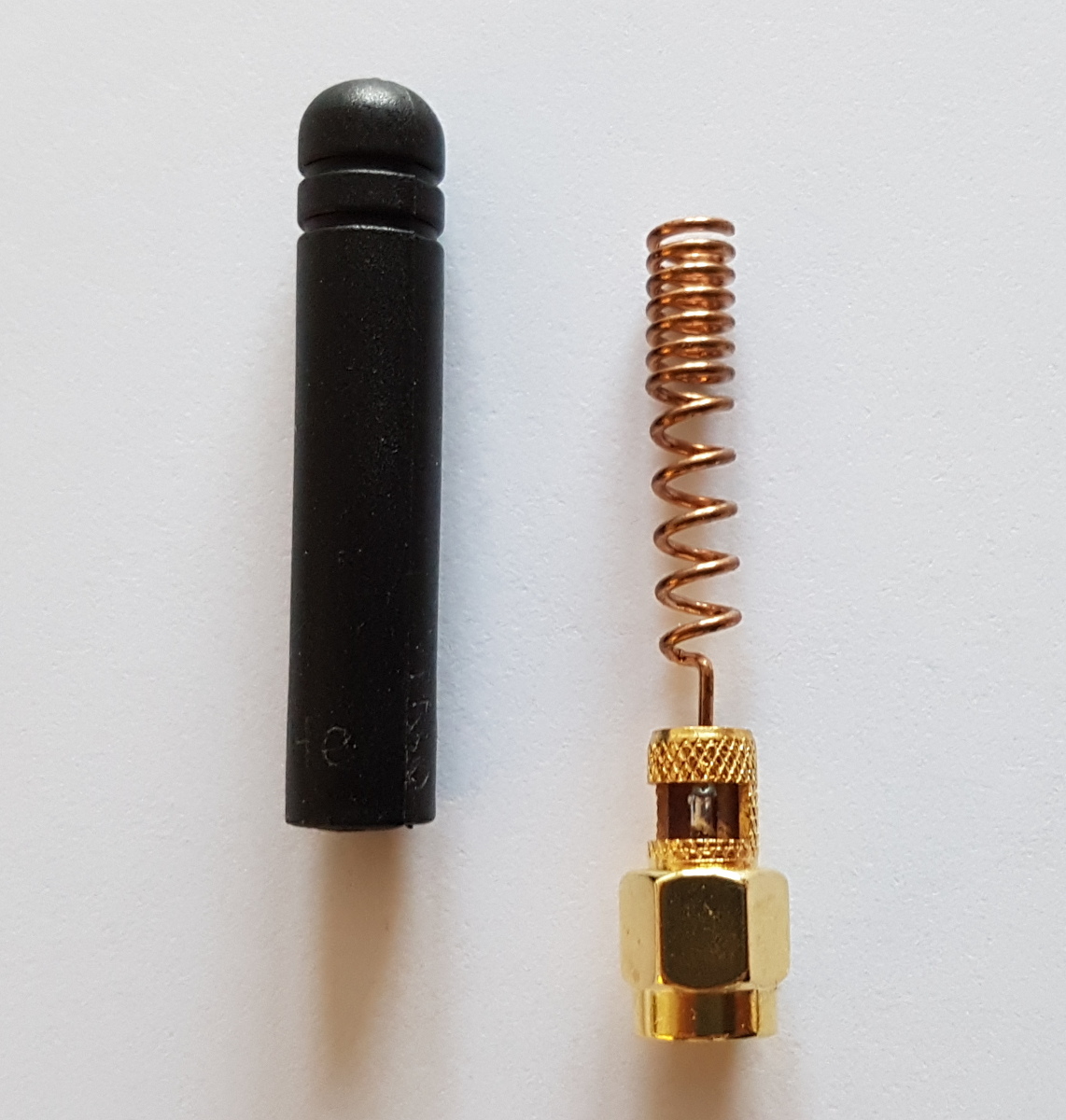 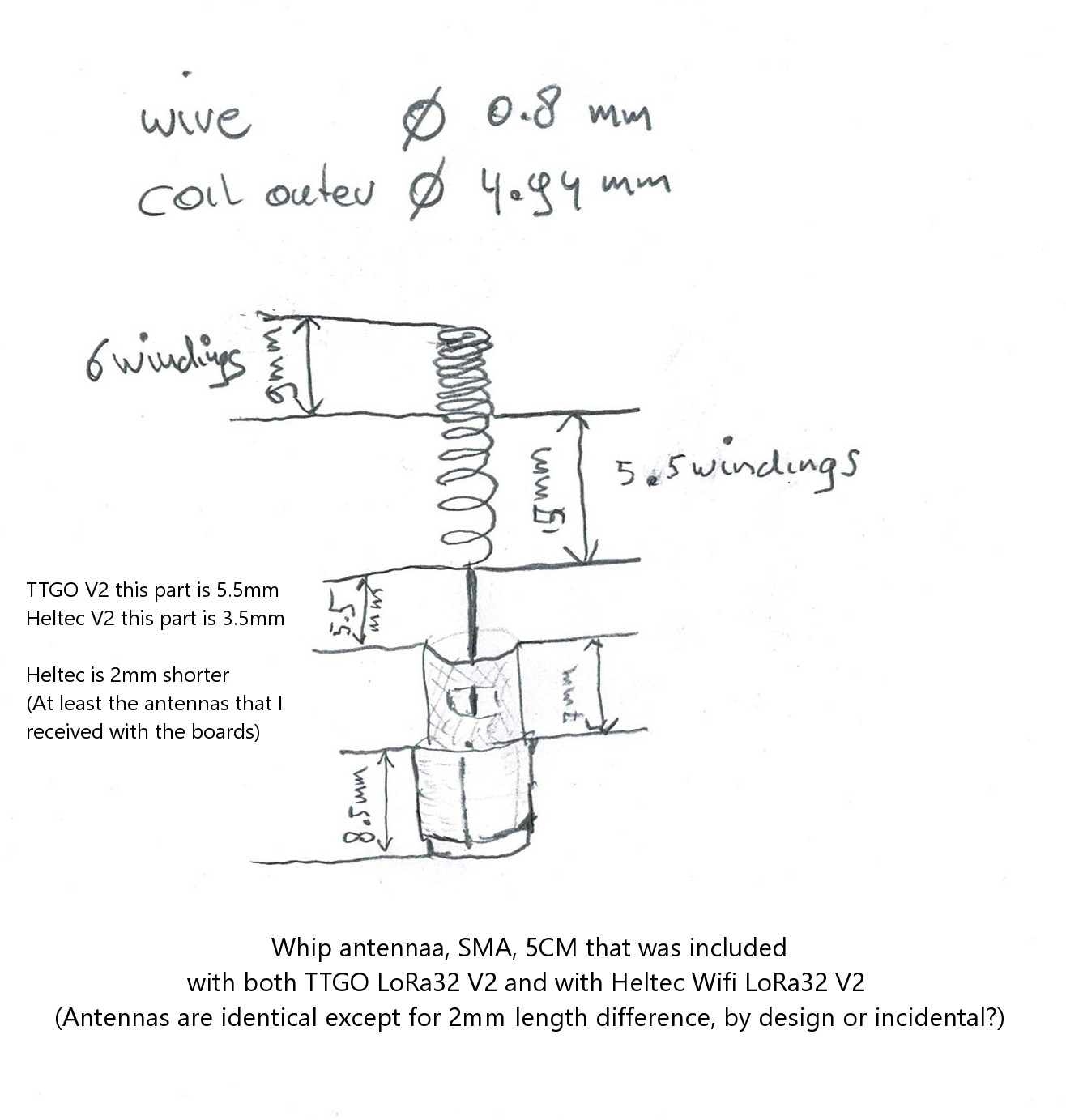 Just a note: for a proper comparison you will need to test all antennas in upright position.

Ik would be nice if we could have a visual overview with pictures, measures and specifications for antennas.
That way one could visually compare different antenna’s (because the specs e.g. frequency range most often is not written on them).

Of course, that’s why i have connectors at the side of the box, for the 90 degree antennas.

I missed the side one, had only noticed the horizontally mounted antenna on top.

90 degree antennas will be mounted to side ports in next run.

But first let’s finish the first run.
Still not finished while collecting more data, but it already looks like there will be an expected and an unexpected result.
Expected: LoPy with it’s long antenna (maybe dipole inside?) has far best results.
Unexpected: Near to LoPY comes Heltec with Linx Antenna #8 (reference see above).

Why unexpected? Because in data sheet this antenna is stated with low gain of -0,3dBi, while other antennas in the test are stated with higher gain values.

Thanks. There’s quite a lot involved with antennas.
The shortening factor is new to me. It explains why the tube from the above 868MHz 19,5cm dipole whip is shorter than 1/4 λ.

By the way: i discovered small mechanical differences with the antennas came with Heltec boards, see picture. 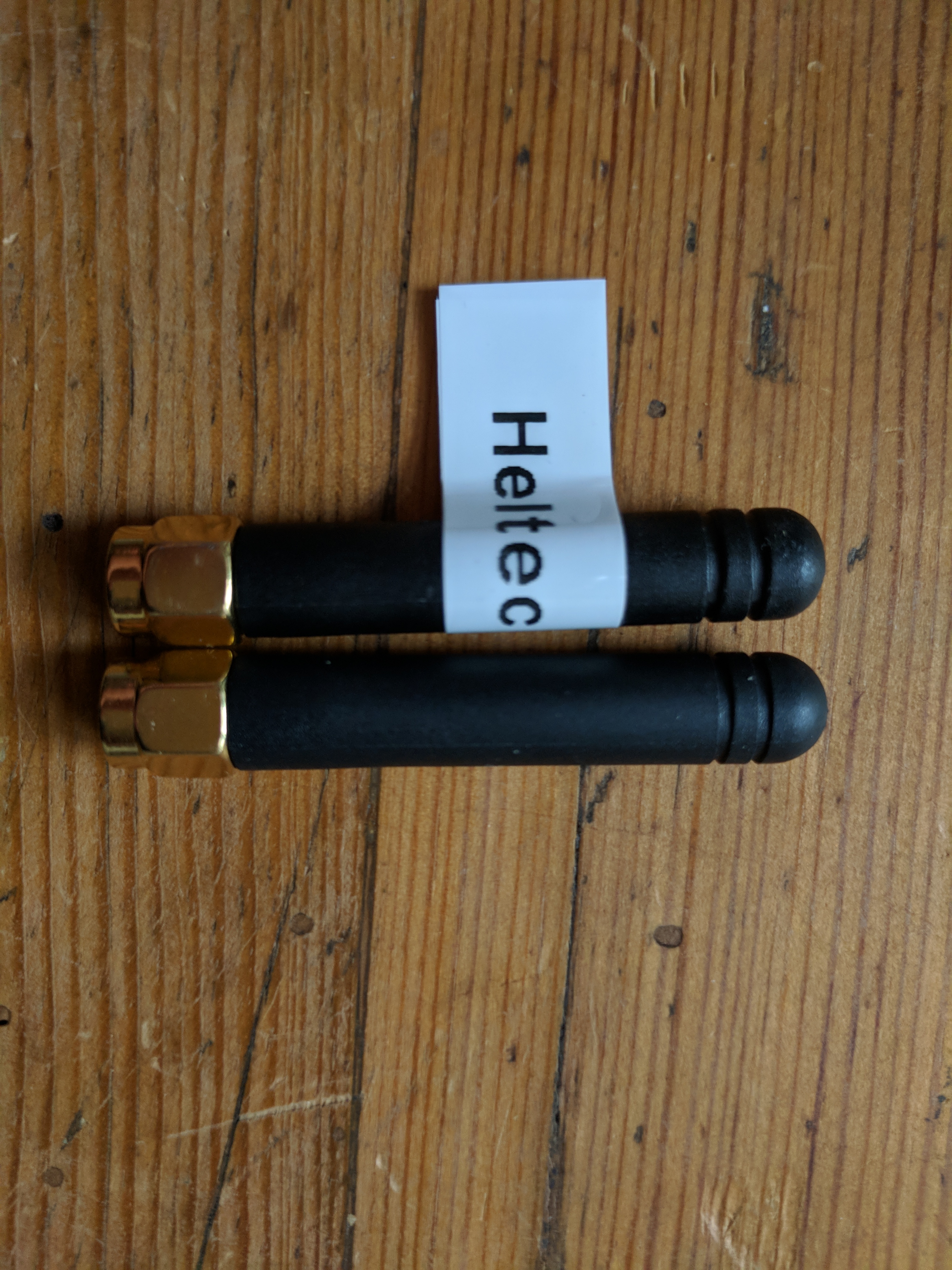 Do not trust what you see on the outside

Remove the caps to see what’s inside (you can slide them back on again). Minor differences on the outside can mean major differences on the inside (even if the outsides appear identical). The antenna size can be different but even the type of antenna can be completely different (I know because I have opened most of my antenna’s).
(To remove the cap: bend the plastic ‘up and down’ to the sides while pulling it off. Some caps come off very easily while others require more strength to remove).

Many of these ‘Chinese antenna’s’ may not be specifically for 868MHz at all, some are used for GSM 900/1800 MHz, and the antennas that are inside can be very different between one make and another.

I already planned to open (and, if necessary, break) them and will post pictures here, soon.
But will first test them in original condition. 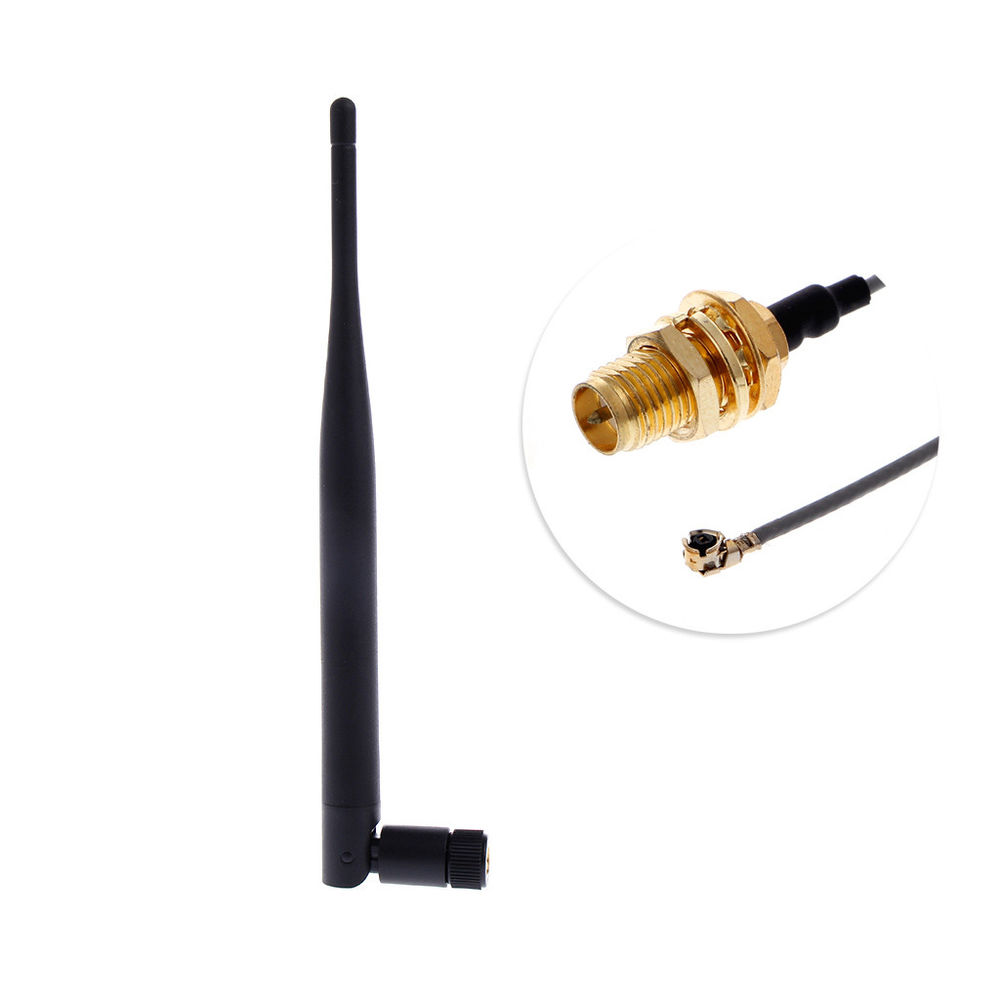 
Whilst not really a scientific test, I just swapped the antenna to check if there was similar performance seen at the gateway.
Even though they look identical, I was suprised to see how much they vary (from -51db to -91db). However most were at the better end.
bluejedi February 12, 2018, 9:43am #273

That is quite a lot. Antenna’s from a single batch should be expected to perform similarly. But it is hard to see if they come from the same batch (same manufacturer even). Large differences in a single batch can indicate quality issues.

An example is the above antenna included with Heltec and TTGO boards. Even while the antenna’s appear identical one of them appears about 2mm longer than the other which can have quite some impact. (In a simple test I measured 8 to 10 dB RSSI difference between these two antennas).

Being a techy geek, (jack of all trades and master of none - especially RF), I would appreciate comments on the following: I wanted to compare how effective different antennae would be and so setup the following test rig - see photo below, showing SDR, RF-bridge with 50ohm reference and noise source, running rtl_power (RTL-SDR) and scanning from 50MHz to 1.5GHz. 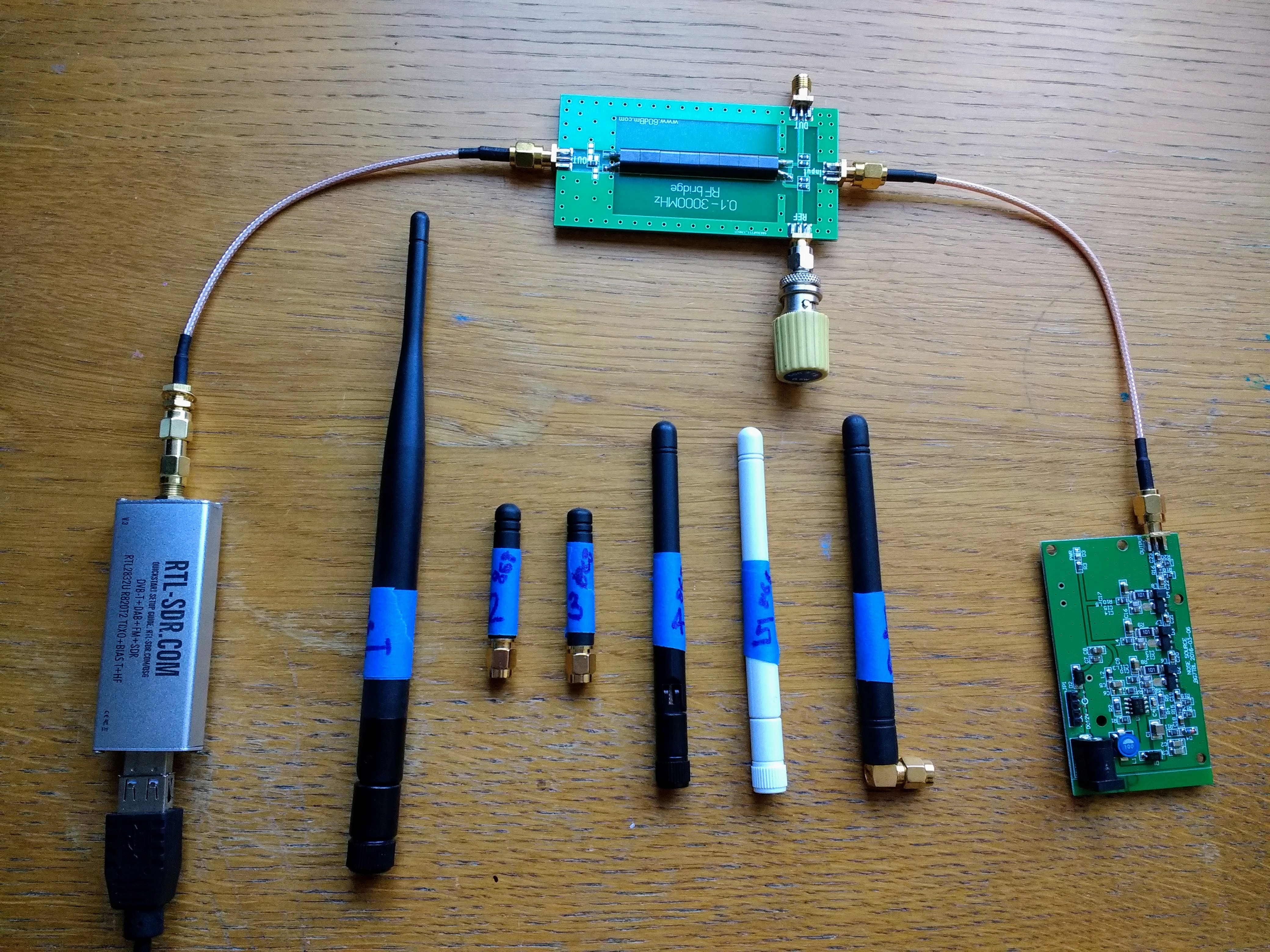 I ran a scan with no antenna attached as baseline and then attached each antenna in turn, producing a plot of scan - baseline, as below:

My question is - does this show that antennas 4 and 6 (green & pink) are not tuned for the 868MHz band?
Also, is there anything I can infer about the effectiveness of the remaining 4 antennae? - Thanks!

Just curious,
What exactly does the RF bridge do, how can this test an antenna?
White noise from 50MHz to 1.5GHz?

So, as far as I understand it and probably using incorrect technical terms. The bridge allows “balanced” connection of SDR to a broadband white noise source and the antenna “sinks” signal at its resonant frequency. The white noise source, I purchased off ebay - item 122922670429 also the RF bridge item 332052527822. The 50ohm load is something I acquired 30years ago from configuring 2BaseT ethernet over 50Ohm coax…