Hi. I am new to IOT and would appreciate some advice. I am setting up a gateway in the UK and due to the chip shortage I could only get hold of US915 RAK 831 hats for RPIs. I did some research and in 2013 the UK governing body OFCOM released both 868 and 915 MHz in the UK. Is it possible to setup a US915 gateway in the UK using the TTN network?

No, even if another frequency band were legal (which I don’t think is actually the case), you may only connect gateways to TTN which operate on a frequency plan which TTN uses in your location.

TTN most definitely does not use 900 MHz in the UK.

You must not do this.

That’s news! Can you show where you saw that.

Perhaps @Jeff-UK, a UK based gateway aficionado could comment.

There is a frequency allocation in IRE2020 (UK document) for the 915Mhz area, but that does not mean you can use the frequncy regardless, there will be bandwidth and allowable duty cycles to consider.

It would take a bit of work (if its not allready been done) to check that existing TTN 915Mhz plans would fit with the UK allocations.

But if TTN do not approve a 915Mhz plan for UK use, end of story I would think.

Hi all, thank you for the feedback.

The above discusses the release of 915 Mhz on license free use, but as you say, if TTn does not allow it then end of story. Is there a way I can check this?

Which uses frequencies from;

Can the band on the US 915 RAK 831 gateway be set to the allowed UK bandwidth and used on the TTN network?

I posted an update to the planned (UK/EU) hamonisation to the forum some time in the last 12-36 months - but damned if I can find it now - wasted hours looking last night!

Bottom line the 2013 document wasnt permission it was a report out on going consultations and request for comments that had been ongoing for years (in large part triggered by the 2009-2012 industry discussions wrt UK Smart metering programme that I was party to on occasion. It outlined an intent and roadmap and was also subject to wider harmonsation and mitigation activities with CEPT IIRC. There was provision for licenced use on a test and development basis (*) - Ofcom was keen to continue gathering data and real world use & impact info. This was not suitable for TTN use. Again IIRC much of the drive was focussed on the implementation of SM IHD’s using a HAN in the 870-876 bands - I think they settled around 872Mhz. As already highlighted by Stuart there is/was a misconception that this might allow US 915 type operation, however, the use cases were actually focussed on a limited set of frequencies in the upper half of the band - 915-921Mhz NOT full US band operation and not overlapping with either the US or AU 915 band implementations wrt TTN.

In the lastpost (the one I cant find) I recall it was still a plan/roadmap activity wrt the higher band - again in concert with ETSI/CEPT/EU, and whilst a potential economic benefit over all (greater choice of devices, potential volume scale allowing lower costs etc.), I pointed out it was double-edged sword with the UK (and much of Europe) potentially decending into the chaos wrt dual option deployment seen in Australia where there is a problem as users have a choice of either AU915 or AS923 - and never the twain shall meet - you end up with a gateway you cant talk to or have nodes that cant work with your GW - wrong bands - leading to the need for dual/redundant deployments and a severe waste of resources and frequency bands…be careful what you wish for as we could bifurcate between current EU868 and a mix of EU868 and XX915+ !

(*) section 3.6
Non-operational licences aim to promote thedevelopment and trialling of innovative uses of the radio spectrum in the UK, including the testing, development, trials and demonstration of radio equipment. They do not allow commercial use. This licensing may be particularly relevant in this case given that the spectrum is largely unused at present and because there are new applications (as discussed in this consultation) that might benefit from development and trialling ahead of the spectrum being released. We will therefore continue to make non-operational licences available for the 870-876 MHz and 915-921 MHz
bands

Can the band on the US 915 RAK 831 gateway be set to the allowed UK bandwidth and used on the TTN network?

So the question is;

Can I set up a TTN Gateway on a set of frequencies that the community will not know about, so cannot use, but still use the TTN free backend for the private setup ?

The downlink channels for US915 are from 923.3 MHz to 927.5 MHz, so you couldn’t use a US915 frequency plan on this gateway legally. I wouldn’t go fiddling with the channel plans even on your own TTS instance unless you know what you are doing. You certainly couldn’t do that if you wanted to connect to the TTN network.

the regional parameters to be used in the UK 915-918MHz band is AS923-3. I would recommend looking into this channel plan instead.

Whether it is supported or not by TTN, I have no idea.

Not in the UK.

Awsome, thank you everyone for the detailed feedback. I only bought the gateway hats as the vendors said it is possible and my funding was time sensitive. I will get them swopped out for 868 MHz when they are available. Brilliant forum BTW.

But yes indeed it is not supported by TTN, I would definitely not use this gateway in the UK at this current time (if you want to use TTN).

Btw I did find another Ofcom statement discussing this topic, if anyone is interested: https://www.ofcom.org.uk/__data/assets/pdf_file/0027/196245/statement-870-and-rlc-radar.pdf

"More spectrum being discussed with the potential 874-876 & 915-921 Harmonization…BUT…be careful what you wish for - we dont want the fragmentation of users/communities and equipment as seen in US & AU where there are many channels and potential frequency plans now causing much angst and confusion and hard decision on which way to go. The 874-876 band pehaps dedicated to LoRaWAN could be good option and in range of re-tuning existing kit, trying to cover 865 to 921 with the same (low cost) kit becomes a challenge! 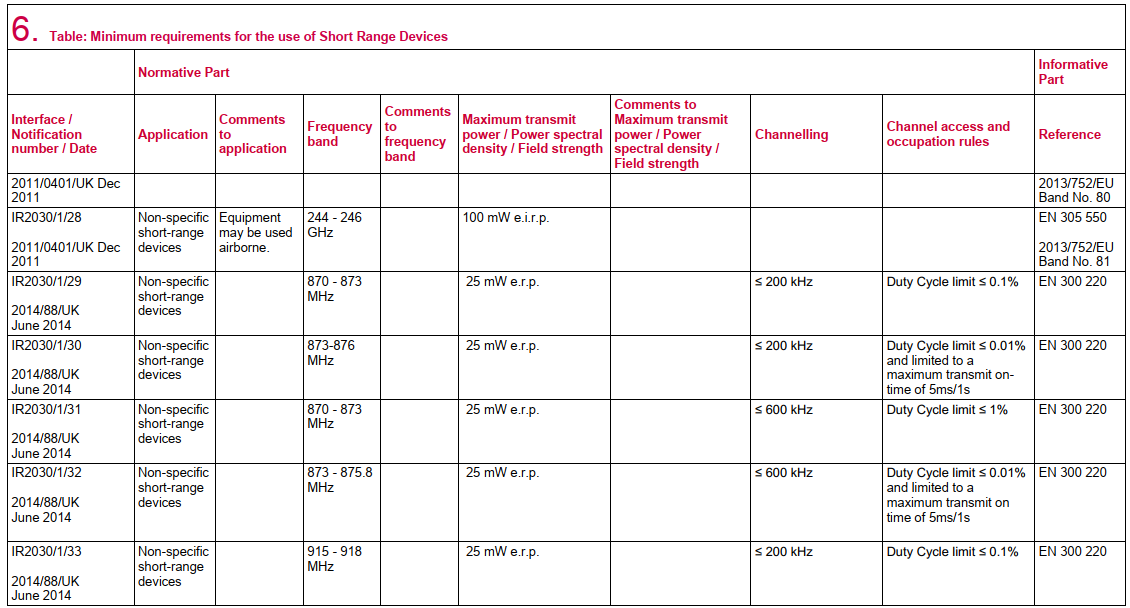 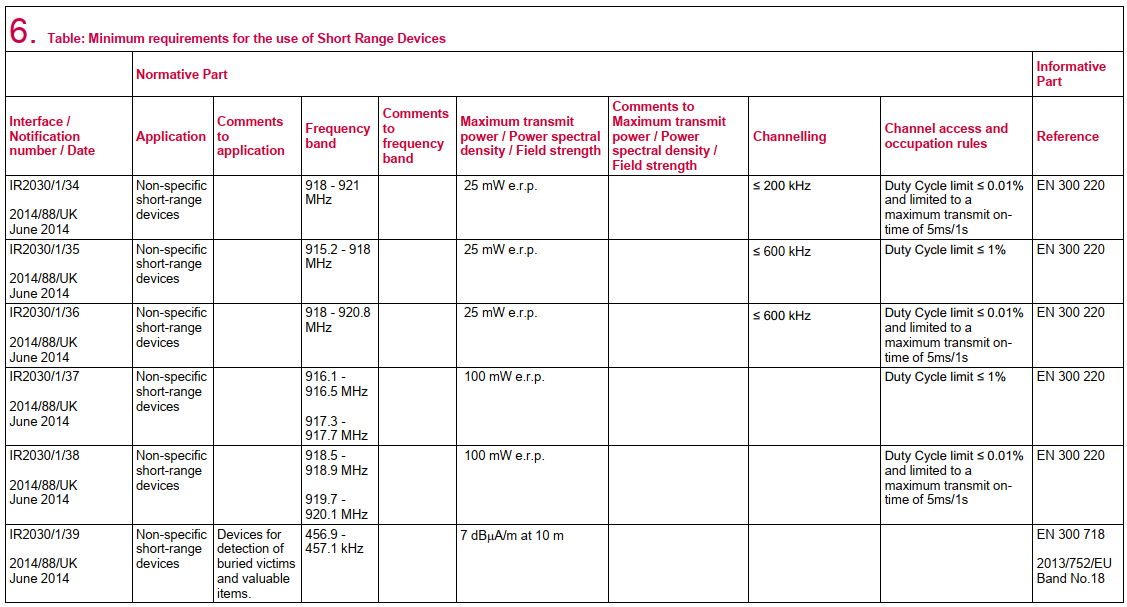 Chip shortages should not have inspired this situation - the chips for a 868 vs a 915 HAT are the same - it’s the passives that make the difference. The supplier could have invoiced the OP and sourced them from RAK - or the OP could have sourced them directly from RAK. If I was @ckruger I’d check on availability from RAK (don’t ask on the their forum, they do technical, not sales, use the email on the home page) so you can micro-manage your supplier towards getting what you need.

Used generally as meaning electrical and electronic components generally…. Logistics and supply chain globally buggered so shorter to just type 4 letters…. You know how lazy I can be