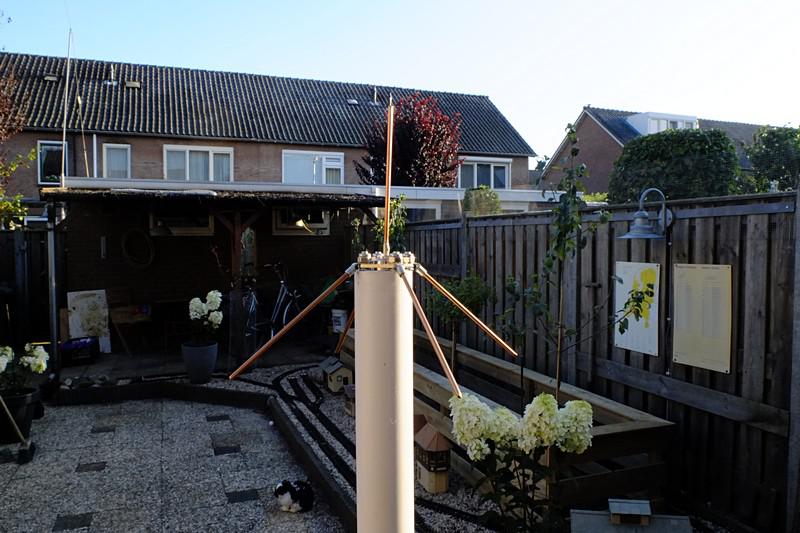 
One of the most common antenna's is the ground plane antenna which is basically a 1/4 lambda driver element and 3 or 4 reflector elements (creating a artificial ground). It's a simple antenna to build with a good bandwidth, it doesn't have any gain over a dipole because it's dipole. But it's simple and fun to experiment with.


Hamradio is all about experimenting, so why not do that for my LoRA WAN / TheThingsNetwork setup?

One of the most common antenna's is the Ground Plane antenna which is basically a 1/4 lambda driver element and 3 or 4 reflector elements (creating a artificial ground). It's a simple antenna to build with a good bandwidth, it doesn't have any gain over a dipole because it's dipole. Ok for the record it has a +2.15dBi gain   (so you 3$ ebay 5 dBi antenna only has a 2.85dB gain over a dipole).

More info about ground plane antennes and dBi and dBd's at : Electronic Design


The materials I used to build this antenna are  :

Solder the wire to the center pin of the chassis part.


Mount the ground plane wires to the chassis part with the M4 10mm screws and the M4 lock nut.

And trim the wires to the correct length (see : design >  80mm for the antenne wire and 86 mm for the groundplane wires).

Bend the groundplane wires to a 45 degr. angle.

You're almost done. When you want to use the groundplane antenna outdoor. Please apply a bit of silicone sealing around the top of the chassis part (so no water is collected on top).


For starters :  The length of the cable does effect the RSSI (see below why I choose a better then average cable)

Materials used in this step :

Make the cable is strait forward but can be tricky for some people. When you haven't done it before, checkout some YouTube  video's like this  or this,  or read some instruction manuals like this.  Or ask help (maybe there is a local hamradio operator of  group who can help you with it)

Some theory about coax cables (or why I choose the Aircell 7) :

For example, the cable I use is the AirCell 7 which has Typ. attenuation (dB/100m@20°C) of 19.0 dB for a frequency 800 Mhz and 21.52 dB for a frequency of 1000Mhz. (see : http://www.paratronic.fi/dokumentit/DB-Aircell7-UK-SF.pdf ) For 868 Mhz this will be result in a attenuation of aprx. 20 dB for 100m cable length (so the RSSI would affected with -20dB when a cable of 100m would be used). This is off-course non-realistic. But for my outdoor antenne I would use a cable with a length of 6m . That would result in a attenuation of aprx. 1.2 dB. So with that cable the RSSI would decrease with -1.2 when using the same antenna on the same location. against the antenna directly mounted to the gateway. For example when a node is received with a RSSI average of -64 with a direct connected antenna to the gateway, the node will be received with a RSSI average of -65.2 when the antenna is connected by the cable to the gateway (but with antenna on the same position).

Because we want to use a outdoor antenna with a gain of 6dBi. That antenne with cable would increase the RSSI from -64 - 1.2 + 6 = -59.2 Still a nice 6 - 1.2 = 4.8 dB gain over the stock antenna (assuming its cheap and has 0 dB gain). Placing it outside in clear view would remove the indoor attenuation (all materials between the node and the gateway will add attenuation) so the RSSI would be even better.

When using a cheaper but more common used consumer cable like the RG-58 with a attenuation of 70 dB for a length of 100m. A cable with a length of 6m would result in a attenuation of almost 4.2 dB. It sounds like much even with LoRaWAN who has a good signal to noise ratio a RG-58 could work out. But remember cutting 4.2 dB on the cable and gaining 6 dB on the antenne would result in a overall gain of just 1.8 dB.

But remember : Placing the antenne outdoor in a clear view would really expand the range of the gateway. IMHO, invest a little in quality. For example in Aircell 7 cables with quality connectors (or other low loss cable) and it will pay off. The most low-loss cables are most of the time professional stuff and the N type connectors are water proof (with outdoor antennes I always use N type connectors).


After the initial building I took the antenna to my local Hamradio club (Veron/VRZA Twente) to have it tested with a RigExpert AA-600  (which when connected to the computer can work up to 1.4Ghz) from a fellow Ham. Some minor tweaking (I made it for a lower frequency so I could trim it for the 868Mhz) the SWR dip was right on the 868Mhz.

At this moment I can't tell anything about the true signal response.  I have to clime the roof to swap the antenna's.


This ground plane antenna can be easily installed on a 32 mm PVC tube (but maybe even a thinner will work for you).

The connected cable will pull the ground plane antenna to his place.

Edit : want to know more about antenna's, pathlosses, cables etc. check out this video from The Things Network New York