I have a gateway consisting of an IMST IC880a and a RaspberryPi, connected via SPI and connected to a good (=2.5A) power source.
The gateway usually works well, but every month or so, it stops forwarding messages. The logfile /var/log/daemon.log shows no real problems (but is very verbose, so I might have missed something)

A reboot helps of course. Only doing a sudo service restart ttn-gateway also fixes the problem.

The day before yesterday the gateway seemed to not forward messages from two of my three nodes. Restarting the service fixed this once again.

Are other people experiencing similar problems?

Yes, I do. And @JeroenB did. My gateway runs since the end of december and has stopped about 5 times.
The Pi keeps running OK but the IC880A hangs. Status messages are still being send but the crc-errors on noise stop.
The ‘failures’ were not evenly spread in time but happened 3 times in one week and the other two several weeks later.
JeroenB was having a lot more trouble but has resolved it (hopefully) by giving it an other case with proper shielding.
So that’s my plan too. In time.

I’m experiencing exactly the same. SPI communications with the iMST seems to be OK as no errors are logged. The symptom is that I do not receive any packets anymore. Simply restarting the ttn-gateway process “solves” this issue.

I may also try to get a better case, and have a look at the receptions statistics: if no packets are received within some set time interval restart the packet forwarder. Not nice, but better than missing lots of packets.

I’ll try a real case with some shielding (how much??). The thing is now “mounted” in the cardboard box the Raspberry was mailed in.

I can calculate how much of my own packets I miss, but the gateway may be missing other persons packets too; that’s harder to monitor.

A restart of the ttn-gateway service solves it temporarily.
I tried another iC880a with the same result.

I’ve ordered an aluminum box, let’s see if that helps.

Some guys in Zurich had the same problem, and as @arthoo said, the main suspect is the casing because this mostly happened with gateways that were not in a proper enclosure. We have other gateways using the plastic outdoor-ready enclosure that I show on the wiki and those have been running for several months already without issues.

In any case, is something we’ll try to start monitoring more in detail in the coming weeks.

We have other gateways using the plastic outdoor-ready enclosure that I show on the wiki and those have been running for several months already without issues.

A plastic enclosure working well, sounds like the problem is not about shielding for radio interference? Then I wonder how many people above use the gateway indoors, and still run into problems. Like:

The thing is now “mounted” in the cardboard box the Raspberry was mailed in.

…which is installed inside, I assume?

The cardboard enclosure is standing inside front of a window.
I think the shielding capacities of cardboard are similar to those of plastic, so it might not be a shielding problem.

That leaves the Raspberry itself, the power brick, the ic880a itself and the connections as problem sources.
The fact that restarting the gateway service and not the whole Raspberry suggests a problem with the ic880a or the software. Once I think I saw the gateway forwarding only 1 of my 3 nodes. This could also indicate problems in the ic880a.

Do these gateway components have updatable firmware?

Maybe you should put some shielding around the cardboardbox, just for the fun of it and see what happens.
Can we be sure the plastic box does not have any shielding capabilities? Is there carbon fiber in it?

Another option is to see whether the problem IC880a’s are all perpendicular to the antenna or have the antenna directly mounted to it or have a pigtail.
Mine has a pigtail and is laying mostly flat (antenna standing upright of course). => medium problems (~once a month)

once in a while

I think it is possible to configure auto restart directly on the systemd service file with something like:

But I’d like to find out more about the root cause of this before going this route.

The aluminum box helped quite a lot, but did not solve the problem. Uptime in the (RF-noisy) office went up from several hours to several days. For now cron restarts the ttn-gateway service (which resets the iC880a) every night.

But I’d like to find out more about the root cause of this before going this route.

Me too! Has anyone contacted IMST yet?

Has anyone contacted IMST yet?

I did send a mail to the personal mail address of one of the people I had contact with before but did not yet receive a reply. I just sent a message via the contact form in the hope they will reply.

I wonder how it is with the Lorank8 gateways as they are based on the same board AFAIK. Anyone?

I wonder how it is with the Lorank8 gateways as they are based on the same board AFAIK. Anyone?

The Lorank8 uses the same IMST hardware, and does not have this problem at all. The software is the same as well.

The differences are BaegleBone vs Raspberry, and a (passive) PCB between the BeagleBone and the IMST board.

The differences are BaegleBone vs Raspberry, and a (passive) PCB between the BeagleBone and the IMST board.

Thanks Thomas. Could it be “flaky connections” due to using jumper wires instead of proper soldering or using real headers. However then I wouldn’t expect restarting only the software fixes it (although it does reset the iMST board, so maybe that does the trick). Also people use these jumper wires for lots of other prototypes successfully, so it seems unlikely to me (but with RF you never know ;-))

Got a reply from iMST:

Thanks for your Email.

Sometimes, customers had problems when catching an impulse on the reset line.

So iC880A is reset and linux host is still running.

We have started a long term test with several iC880A-USB to reproduce this problem.

We will keep you informed about the results.

For the further communication please use our Ticket System:

This is more easy to handle for us.

Note that I am using the SPI version

I the beginning i had allot of problems, the gateway stops working after a few hours.
Then i build it into an old router case, which solves allmost all problems, but an sporadic hangup is always possible.
I hope iMST can find the cause of this problem ! 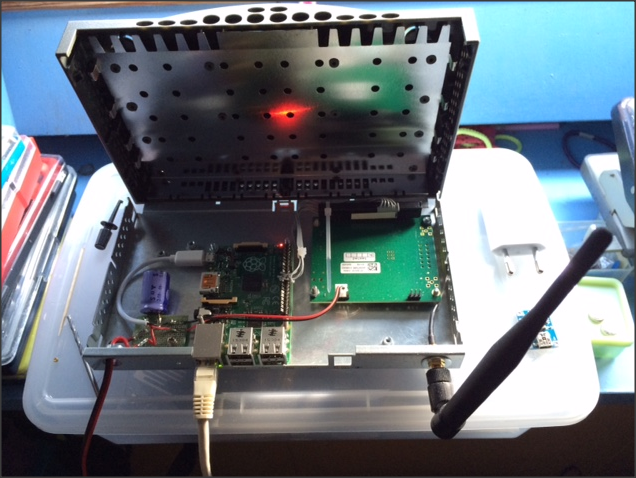 … and a (passive) PCB between the BeagleBone and the IMST board.

In the earlier days, when we were active on the radio band we built something like this: