I’m relatively new here, only lurking. But I got addicted to LoRaWAN/TTN already.
One of the things that was bothering me is that you do need to go through quite a steep learning curve to really understand the concept of this wonderful technology and really be able to get data in and out of it.

As developer on ESPeasy, I spent the last week to make a new controller for ESPeasy.
For those that don’t know ESPeasy first a short introduction:
ESPeasy is an open source firmware for ESP8266/ESP32. A bit like Tasmota only different approach of processing data.

The main parts in ESPeasy are:

So I wrote a new controller for sending data from ESPeasy to TTN.

@kersing told me to go with the RN2384, so that’s what I did, but I will also add a controller using the SX127x using LMIC.

The settings section by section:

Controller Port: The port on the TTN.
This controller can send all data to the same port, the decoder.js is just looking at the first byte of the message to see what plugin is sending the data and decode it according to how the plugin has encoded the data.

Controller Queue
This part is a queuing mechanism present for all controllers in ESPeasy.
A number of plugins may send data in a short burst, but the receiving end of a controller may not be able to keep up with that. This is especially true for LoRa, where sending a single packet may take several seconds and the duty cycle rules may prevent bursting data.

Credentials
Support both OTAA and ABP.
Since the RN2384 has a HW DevEUI, setting the DevEUI value is optional.

Connection Configuration
I have not added all frequency plans yet and only allow to set the spread factor.
Maybe later I will also add ADR and the option to limit the output power.
First let’s keep it simple

Serial Port Configuration
Reset pin support is not implemented yet, but all other settings can be used.
As can be seen in the screenshot, Software Serial is also supported and I’ve been running it for about a week now with not really a lot of issues.
Sometimes I noticed strange characters in the HW DevEUI, so I may need to add some extra checks in the code to check replies from the RN2384.
It should run fine on HW serial too, as long as you use a PNP transistor on GPIO-15 if Serial0-swapped is being used.
I have not yet tested on ESP32, but I see no reason why it should not work on ESP32.

I changed the way how the module does a join to prevent unneeded OTAA join requests.
The module is assumed to be connected, unless an attempt to send returns a “not_joined” reply. Then perform a join.
As long as the RN2384 remains powered, it will does not need to join again.
So the ESP node can crash/reboot or even receive a new firmware and still remain joined.

I still have to implement sleep mode on the module to support deep sleep cycles too.

This was the sending part, but the data also has to be decoded.
I got ‘inspiration’ from the ESP32-pax counter project after making a few PRs on it too get to know TTN.
Based on the decoder of that project I wrote one for ESPeasy.
Right now, all plugins are supported and decoded.
Some plugins can output more than 4 values, but in ESPeasy a user must chose which ones to output. Such choices are impossible to decode, or you need to send along the choices. This extra data can also be used just to send all data.
For now 2 plugins (sysinfo and GPS) can output a packed data stream of their data, which can be decoded on the TTN decoder part.

I will add this packed form for more plugins to make sending data more efficient and also allow to send more than 4 values per plugin output.

The code is not yet included in the nightly builds, since it is still in development and I am still changing things.
See here for the decoder part: https://github.com/letscontrolit/ESPEasy/tree/mega/misc/TTN
For those that want to test it, you have to include C018 in the build.

This is just a preview, so please let me know if I do things completely wrong here, or if things can be improved.
Like I said, it is still new to me and I’m still on the steep learning curve.
Let’s hope this controller can make it easier for newcomers to start using LoRaWAN/TTN without having to know it all before starting.

Hi TD-er,
Great to see you here on TTN ! I have a few switches and power sockets on ESPeasy and really enjoy the limitless possibilities (and breaking free from vendor controlled cloud apps). I was trying to switch some lights way back in the garden and there things quickly become troublesome with wifi in terms of range (or putting expensive equipment on the outside of the house). So a LoRA controlled relay (a la Sonoff Basic) sounds like a great next step for ESPeasy. Best of luck and thank you for the hard work !! Peter

Thanks for enjoying ESPeasy as much as I do

I think switching relays is just the one use case LoRaWAN/TTN is not really good for.
It is possible to get data back to the node in the field, but only as piggy back on a reply on a message sent by the node to the gateway.
So the latency for getting a command to a node depends on how often a node does send data to the gateway and also the node must be able to ‘hear’ the gateway.

However, if you place a weather station or some watering sensor for the plants in the back of your garden, then this controller to send the sensor data to the gateway would be well suited.
You could maybe even let the node know there are some updates on the rules.
These rules could be “tonight will be people in the garden, so let’s switch on the lights when it gets dark and play some music and don’t turn on the watering installation”.

But switching on demand via remote control over LoRaWAN is not really the best way I guess.

Oh and “receiving” is not yet implemented in the controller, apart from OTAA join.

This is a really great enhancement. ESPEasy made ESP’s available to a lot broader audience. Although I could have missed recent developments in the TTN area at least in the early days I recognize the steep learning curve you mention. So it seems like a very nice step forward increasing accessibility.

This topic has been a bit quiet the last 9 months, but the development here absolutely has not been halted. 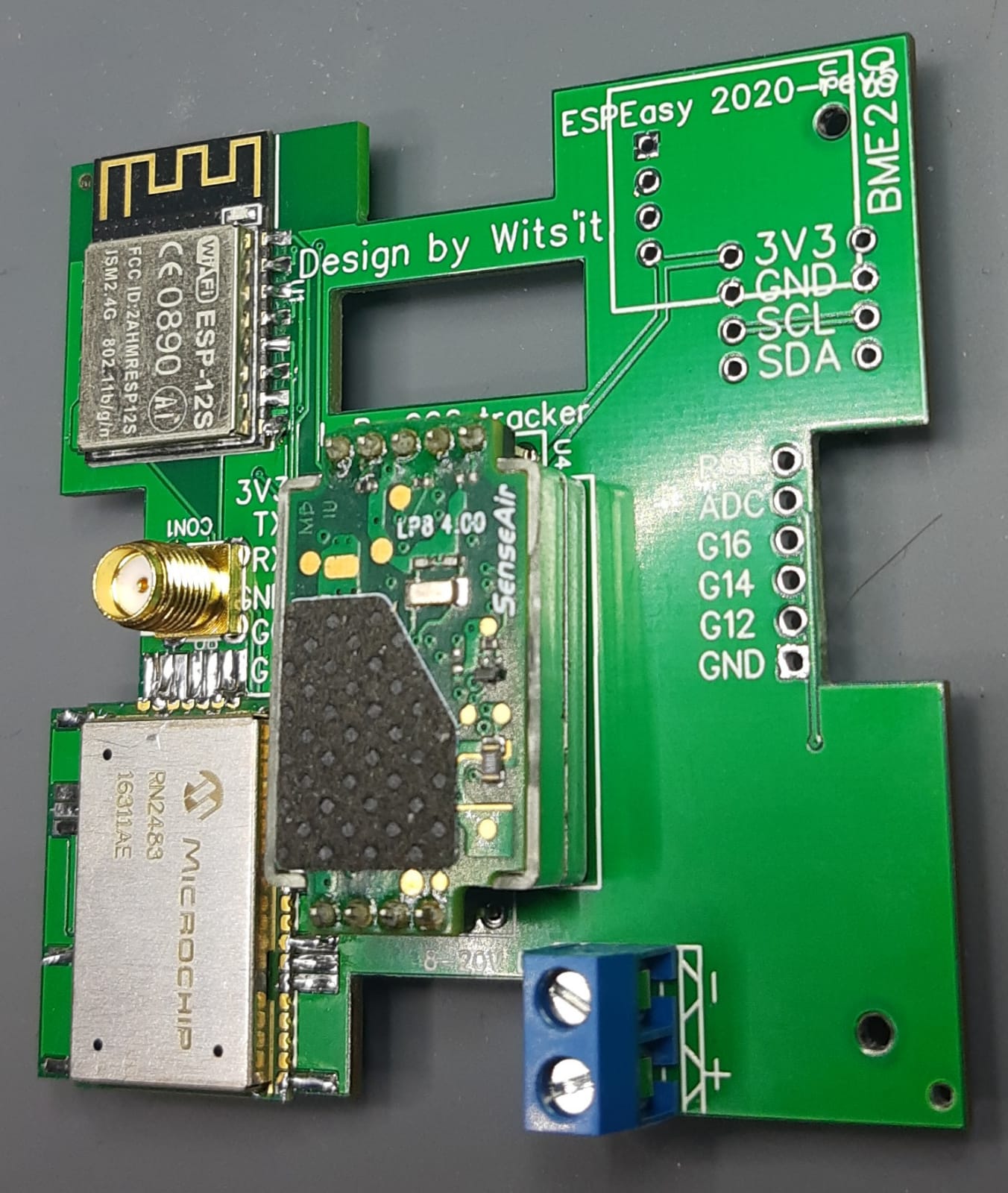 The I2C-UART bridge boards (3 chips on one board, so 6 UART ports) on the left.
Newer iteration of the LoRa board with switching power supply on the bottom (8 - 20V input) and one I2C to UART bridge. 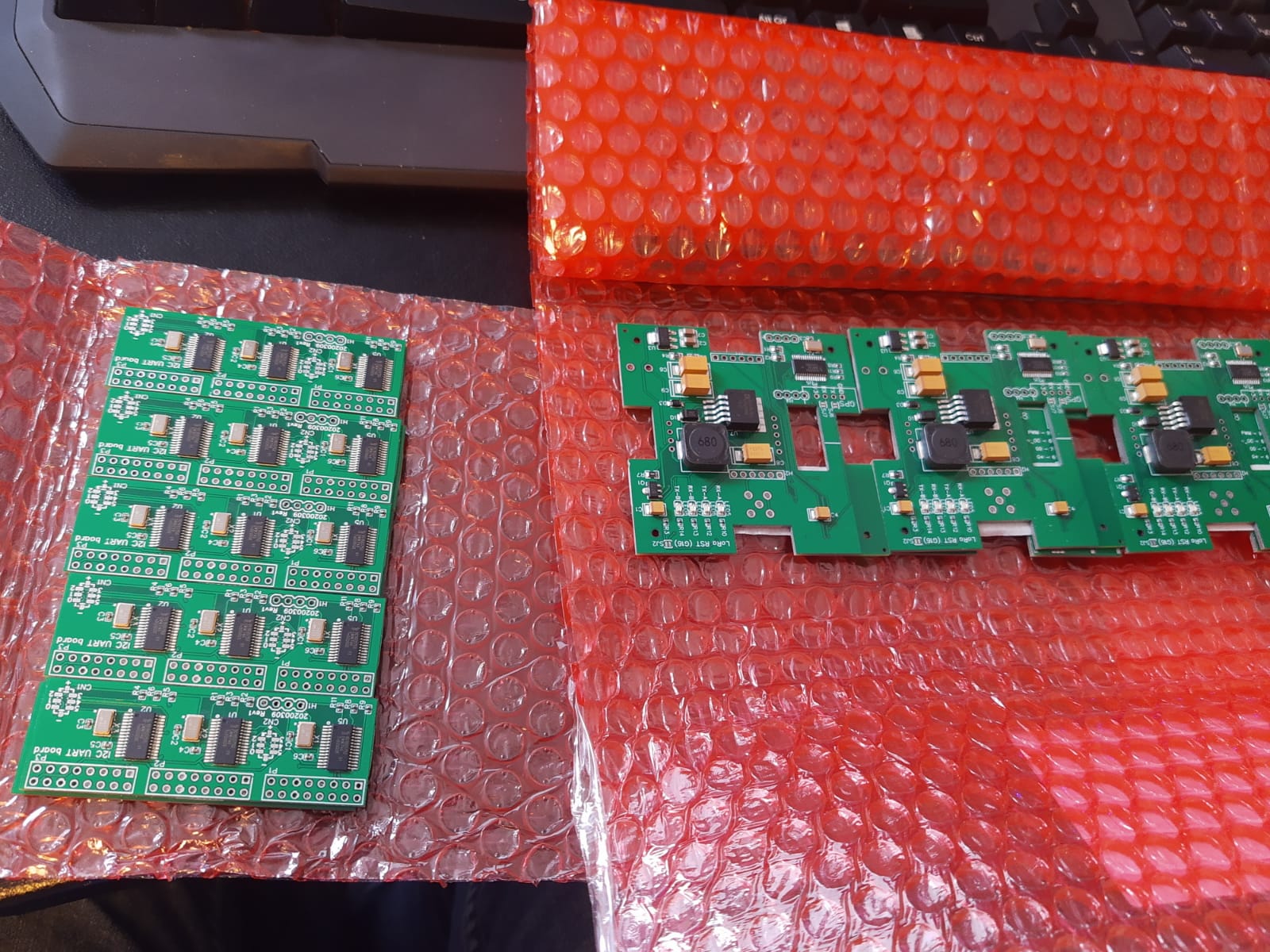 For this last board I made a small unit running on a 18650 battery (with charger included of course) and sent 2 of them to a friend of mine in Sweden. 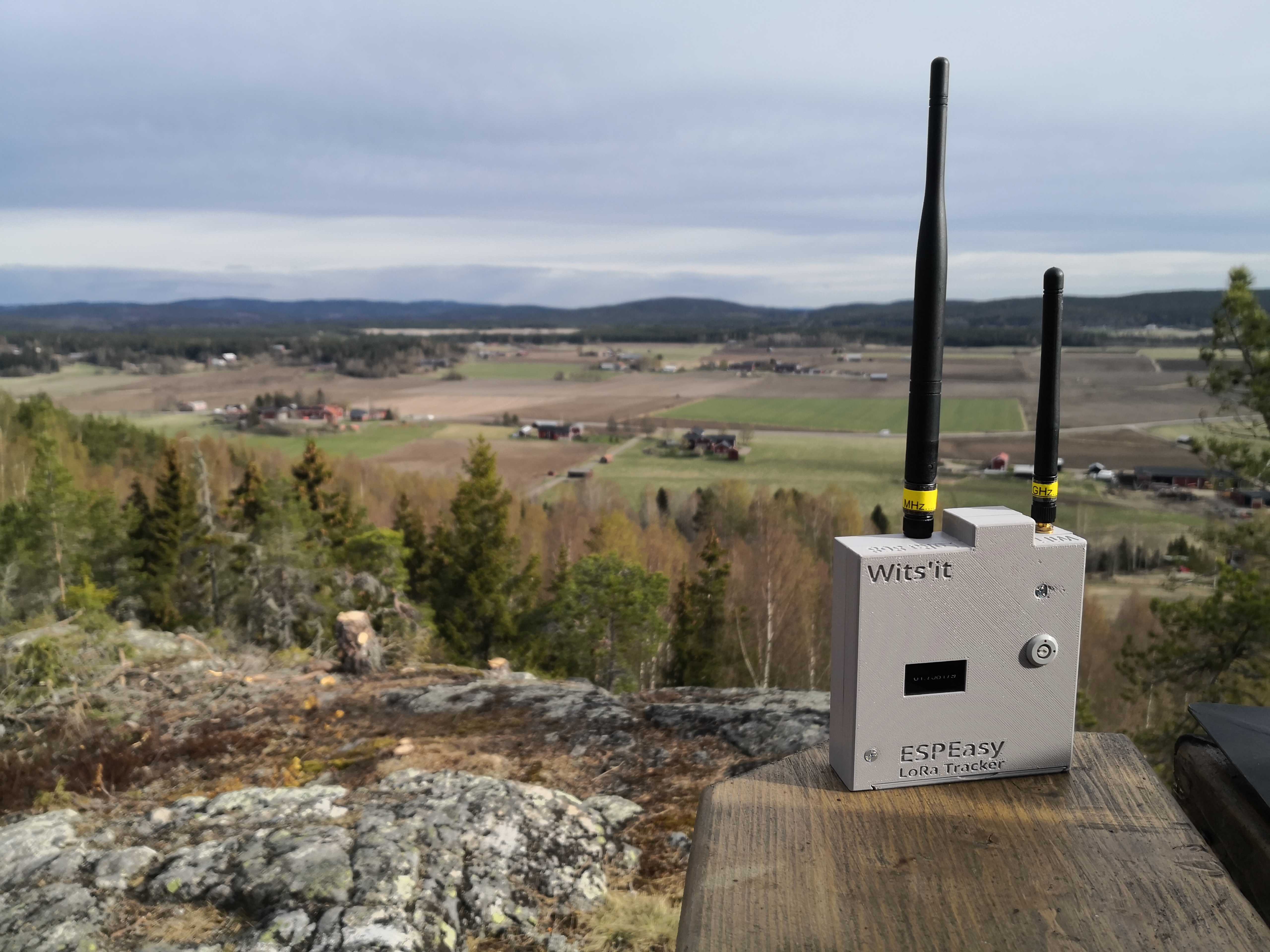 Along with it 2 TTIG indoor gateways to get him hooked (up) and he’s managing roughly 2 km range to these indoor gateways.
Last year, at the Delsbo Electric 2019 event, I was also present as I made the measurement boxes to measure the energy consumption of the vehicles the students made. (also official Guinness World Record for lowest energy consumption registered using these boxes)
So the plan was to have these LoRaWAN units present at this years event of Delsbo Electric. But because of the Covid-19 pandemic, it is postponed a bit.
The idea is to cover the track for this Delsbo Electric with these LoRa units so we can have live telemetry at the start/finish.
Also for the officials of the Guinness World Record, it is nice they can have a secondary unit along with them that collects the same sample data on a separate unit, with its own GPS so they have extra data to validate the measurements as it took quite some time last year to have the data validated for the official record. An extra feed would be welcome here.

So it is being developed more and more and when I’m satisfied, I will also share the gerber files and BOM and pick-and-place files so anyone can order these boards for a very low price, as many as they would like. (just order them SMT soldered at JLCPCB and solder on the ESP and RN2483 and you’re done)
Cost for the parts and PCB will be roughly 10$ (excl. shipping an taxes) from the manufacturer.
ESP8266 will add roughly 2.5$ and RN2483 can be had for about 11 euro ex. VAT.

Hi Im really keen to try this out however after working on this for a few hours at the Easyesp site and flashing a nodeMCU, I cannot see the controller in the web UI.
I see that you say that you need to include C018 in the build but its a bit tricky for a novice to see how that is done.
Is it in the standard release?
Cheers
P

I’ve not yet created a separate build for it.
If I’m not mistaken, the controller is included in the “custom” build in the nightly builds. Releases · letscontrolit/ESPEasy · GitHub

If you need a specific build, let me know and I will build one for you.

Hi TD-er,
Thanks for your very quick response!
OK I will take a look and see if I can get it going, with custom (I was using the TEST releases)
Im working on RN2483 at the moment. I think its a really cool Idea of yours to connect these two projects together.
I am using a chirpstack server on an R-Pi in my lab setup as well as TTN, so I can test without causing too much interference to TTN .

Do you send something from a task to this controller?
If nothing is being sent, it will not perform a join.

I have used older ones, which are also working. So at least from the ESPEasy side of things there should not be anything wrong with it.

Hello TD-er, Arr…OK yes I see now. Thank-you friend for your help with this… It works!
Thank-you for making the time to create this, Its a very easy way to setup a LoRaWan node.
P

Thanks Jeff-UK, yes a bit old now… I didnt get round to trying out the later firmware yet…

Great to hear it is working and easy to use too.
Have fun with it.

Hi TD-er,
Can I send a downlink LoraWan to the controller and have it switch a GPIO pin state?
P