I installed a new Indoor Gateway in my house a couple of days ago. The installation went smoothly and TTN says the gateway is connected and receiving and transmitting messages. The documentation says this about the green LED:

Since I installed it, my gateway has been alternating between Green-solid and Green-blinking-1/4-sec. It’s solid for about 55 seconds and then blinking for 10-20 seconds. The WiFi at the installation location is strong and I’ve also tried two other locations with good WiFi. My Internet connection seems stable.

Is this behavior normal? I wouldn’t be too concerned except that I have a device that doesn’t seem to be receiving messages. According to TTN it is succesfully activating but the device doesn’t seem to think so. I also see pulses on the DI1 pin which the LMIC doc tells me is called RxTimeout and the device is acting as if its activations requests are timing out.

But we’re facing a problem that the led is not always green. Sometimes it blinks for 30-60 seconds, then it’s green again.

Is anyone of you facing the same problem. We tested it on multiple wifi access points, all have the same behavior.

Is this behavior normal?

I have the same at the moment, however when its flashing its receiving data.
There are some instabillity problems with the server side handling of TTIG according to HTDVisser.

Am curious to know if others are seeing the flashing green LED on their TTIG? I’ve been looking at mine (sitting on my desk next to my monitor) and it seems to be doing this 2 or 3 times a minute now. I’m still seeing it pass traffic, but it’s difficult to know if there is a problem as I only have one edge device that reports every 15 minutes or so.

yes you’ve mentioned that before

I have it too and I’ve tested that, when it’s flashing green, it still is able to receive data from a node.
However I’m sure TTI is aware of this and we hope for an explanation / solution.

In response to the "flashing green LED " question:

If there’s no traffic on your gateway for about 60s, the WebSocket(WS) connection to the network is dropped intentionally and the gateway will re-connect. During reconnection, the LED will flash green.

The reason for this to not have gateways actively connected to the network and taking up resources when there’s no traffic (since WS requires a persistent connection).

That could also explain the occasional delays I see between the node sending an uplink and the time I receive it in the backend.

Thank you - that was very helpful!

Which are the 2 rf connectors in the concentrator board?
One seems like an UFL MHF1, the other is a MMCX or something completely different?

If there’s no traffic on your gateway for about 60s, the WebSocket(WS) connection to the network is dropped intentionally and the gateway will re-connect.

Wouldn’t it make sense to increase the WebSocket(WS) timeout to 5 or 10 minutes or to adjust it dynamically?

I noticed that it takes ~2 seconds when the packet was received by the TTIG till it starts a new WS connection and another second till the connection is established and the packet get’s send. If the packet is received by multiple gateways deduplication doesn’t work anymore and the packet shows up as “retry” in the TTN console. Also in conditions where rx packet frequency is between 1 to 10 minutes it might cause more load in the backend then leaving the session established…

Also to add, wouldn’t the Downlink listen window on the device be missed because of the large time delay between Uplink transmit and when the TTN servers received it? Therefore, unless another active gateway is in the area, you’d never be able to get a Downlink packet to the device.

4 Likes
TTIG does not support downlinks when not frequently receiving uplinks?
wirelessukm (Wirelessukm) July 8, 2019, 6:11am #684

Has anyone did a coverage testing on TTIG? IS more than 10Km?

The range you get would depend on the local environment and where the TTIG is sited.

In the right position the TTIG is certainly capable of 10km.

Have you tried it. I want to purchase it but worry that it might not have that capability of the 10km coverage. It could be a bit relieved if someone did manage to achieve the 10km.

No I have not tried it.

However its an RF device like many others and coverage\range is very dependant on where it is located, for UHF communications in particular range is to a great extent determined by how high you can get the antenna, or in the case of TTIG, how high youi can get the entire device.

You might get more informative answers if you described where you are going to locate it and the surrounding environment. Someone may have used it in similar circumstances.

Noted that. I want to place it on first floor of a building, near a window. Hoping it can communicate more than 2km.

I thin k it could reach 10km only outdoors. 1st floor could be ok, but if around you you have a lot of buidings, it will not be sufficient.
Mine is just under the roof with a different antenna, and can reach 3km. In one single occasion I received signal from >10km.

Hoping it can communicate more than 2km.

it also depends on what type of glass you have in the windows, sun blocking glass is known to have an effect on the RF signals

Here is an example fo similar set up to what you describe from a pop-up test earlier in the year in Marlow on the River Thames here in UK. There was no point installing a big expensive outdoor system with high gain ant as location/range was likely constrained by the hills/terrain surrounding the river valley. TTIG behaved perfectly placed in a 1st floor window of a ‘friendly’ office block on the north side of the town. We were looking for 1.5-3km range depending on terrain and building clutter and TTIG more than met the needs.

Your mileage may vary depending on building construction, local clutter, whether glazing is ‘Low-K’ thermal glass or other architectural glass with any of the various oxide/film layers used for colouring or termal reflectivity etc.

I will be testing at a know site with good elevation and wide field of view LoS for 10-20km range in a few weeks time and will post update here once completed. Note also, several folk seem to have modded units to add external ant which may also improve matters. Have not had time to field test one of my own modded TTIG’s yet due to other projects… 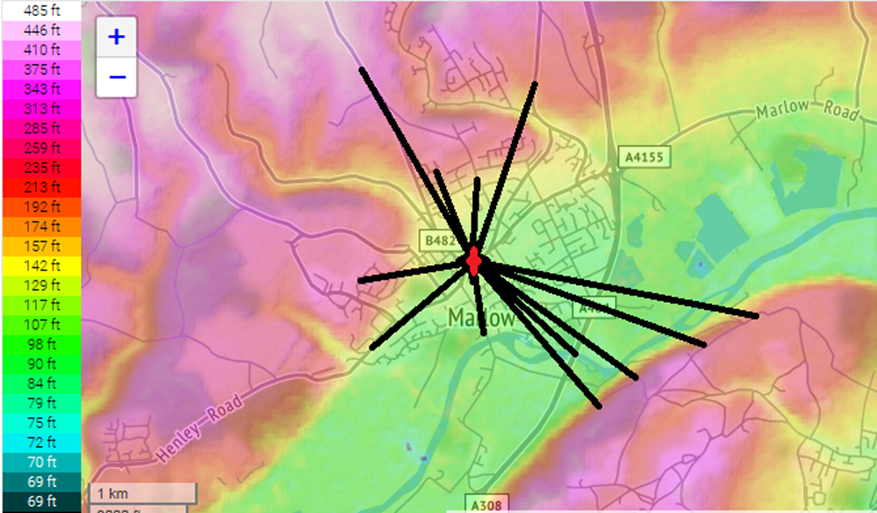 I placed an order 1 month ago, but the estimated delivery day moved 4 months ahead, till October. Are there any problems with the production ?