If you switch off gateway for a long time and start it. it gets connected to ttn console once.
But after that it fails (ie the last seen time increases) My lorawan card is warm but not hot, it’s inside it’s normal working temp I think.
Some questions what does reboot reason 0x13 mean?

Maybe this is a valid reason, but some time after that it reboots in the middle of the test CNFG: Load onlin (notice it’s truncated) it does this every time at same spot.

Looking at that last line, could it also be NTP related? Maybe it corrects the time wrongly (too big step or backwards) after the first reboot causing a software error or watchdog issue.
Will try to block the request and see. Maybe SNTP doesn’t stand for Simple Network Time Protocol in this case? We need the sourcecode in a github repo!

Thank you for the great project! I was happy to get my packages in the mail this week (through Skynet), and couldn’t wait to unbox the gateway, uno’s and node.

Unfortunately, I haven’t be able to connect to the TTN network yet. As a few others mentioned above, I am able to connect it to my local WIFI network (and after that, i’m even able to connect to read out the /info page on the by our DHCP provider ip adress of the gateway), but it enters a reboot loop after the third LED started blinking for a few seconds, stops, and then all LEDS start to blink and the gateway starts to reboot.

I’m waiting for my UART cable to get some more information from the serial port.

For now: i’m not in a hurry, I wish you a good conference, but if you need me for some testing, just know that i’m there to supply extra debug information or to test any new firmware builds (if that would be a solution).

Welcome to the club of backers who made this all possible in the first place but must wait for support.
Perhaps we need to find a good banner maker, and organize a protest outside the conference! 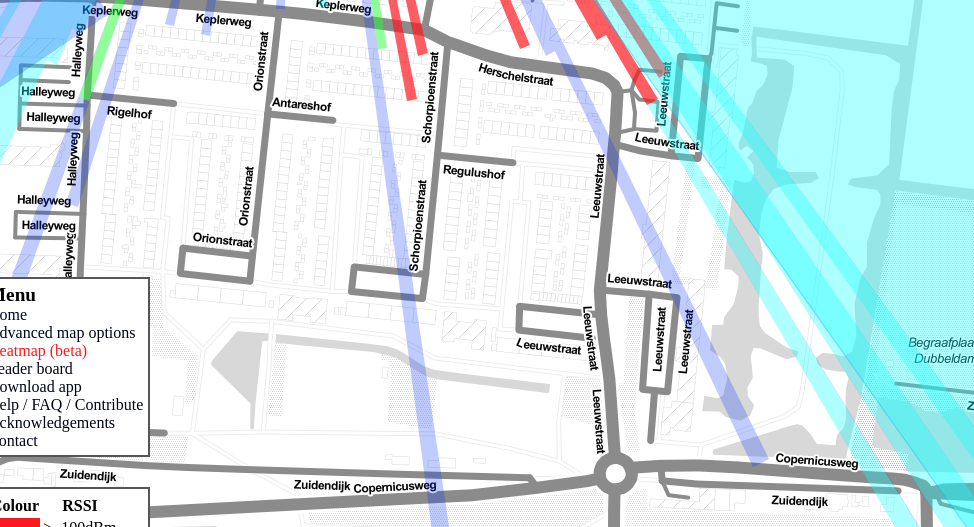 … beta frimaware. This can be activated via the gateway console.

But, would “Beta firmware can be unstable, use at your own risk” have any implication when I brick it?

The LoRA card gets very warm very quickly - is that normal?

Yes. We were also sceptical, but both Semtech and Microchip assured us that it’s within normal parameters.

We need the sourcecode in a github repo!

We are working on getting everything ready for Github. They promised us that we could publish it during the conference.

would “Beta firmware can be unstable, use at your own risk” have any implication when I brick it?

The firmware update does not overwrite the bootloader of the gateway. If things go terribly wrong you’ll be able to flash firmware from an SD card.

Enabling “Beta Updates” in TTN Console does not show anything different than my earlier log. In other words: I don’t see it trying to download the firmware, maybe as it never successfully completed Step 4 of its initial activation.

Also, erasing the serial flash (holding down the “mode” button while powering up) and then using ethernet rather than WiFi in Step 3 of https://activate.thethingsnetwork.org, makes no difference: I still see it fetching some frequency configuration from the internet, soon followed by LORA: Configuration failed, retry (sometimes two times) and then rebooting.

In the earlier and today’s log I noticed HTTP: Got 1232 bytes (I assume decimal?) for both WiFi and ethernet in:

…but https://account.thethingsnetwork.org/api/v2/frequency-plans/EU_863_870 shows Content-Length: 3309 (decimal, excluding any HTTP headers). Could that difference in size indicate some problem?

Of course, maybe those lines in the log are very much unrelated. Or maybe the gateway gets it in some gzip’d transfer encoding, while my Chrome does not.

When you connect to both the RX and TX serial pins, you can also type help to get a list of commands you can execute.

…apparently being the following, which I don’t know how to use:

Did you find something more?

I haven’t found a purpose for it yet, just wanted to mention there is a menu

However you can then run help tcpip, help wifi etc to get more info.

Ah, I figured I needed to prefix commands with tcpip or wifi, but no. As help tcpip shows the following, one can just enter those commands without the prefix:

It’s a bit hard to type the command while it’s rebooting all the time, and to read the output between the regular log lines. But: might be useful indeed!

…but https://account.thethingsnetwork.org/api/v2/frequency-plans/EU_863_870 shows Content-Length: 3309 (decimal, excluding any HTTP headers). Could that difference in size indicate some problem?

If anyone with a trouble-free gateway hooks up a serial cable, can you please let me know what URL and size you get in the following part?

Hi There,
Received my GW, was hoping as read here to have setup in less than 5 min (not my 1st GW setting, but first one with the TTN one) :

Anyway, just amazing I never saw the GW as an AP as setup mention, if anyone is experiencing this, just plug network cable, will remove you some headache

The firmware update does not overwrite the bootloader of the gateway. If things go terribly wrong you’ll be able to flash firmware from an SD card.

Where can one download the firmware, and what would be the process to flash it onto the device?

Here is my status… still no luck.

Any idea how to progress ?

One extra piece of information from the web server error message:

the network is offline, Origin is not allowed by Access-Control-Allow-Origin, the page is being unloaded, etc.

Maybe I must note that I tried with switch-router and with ttn-router-eu , my ISP is UPC and I am based in Switzerland.

My gateway has the same problem - stuck in a loop.

Has anyone any suggestions how to get this working?

Yesterday the gateway arrived - but unfortunately, same story here. Initial setup through wifi - ending up in boot loop. Second try using ethernet, same story - also after full reset. The device does register on the local network, below the screenshot of the /info page - and also of the console, showing the device never managed to connect. Hoping for a solution as much as everyone else here! 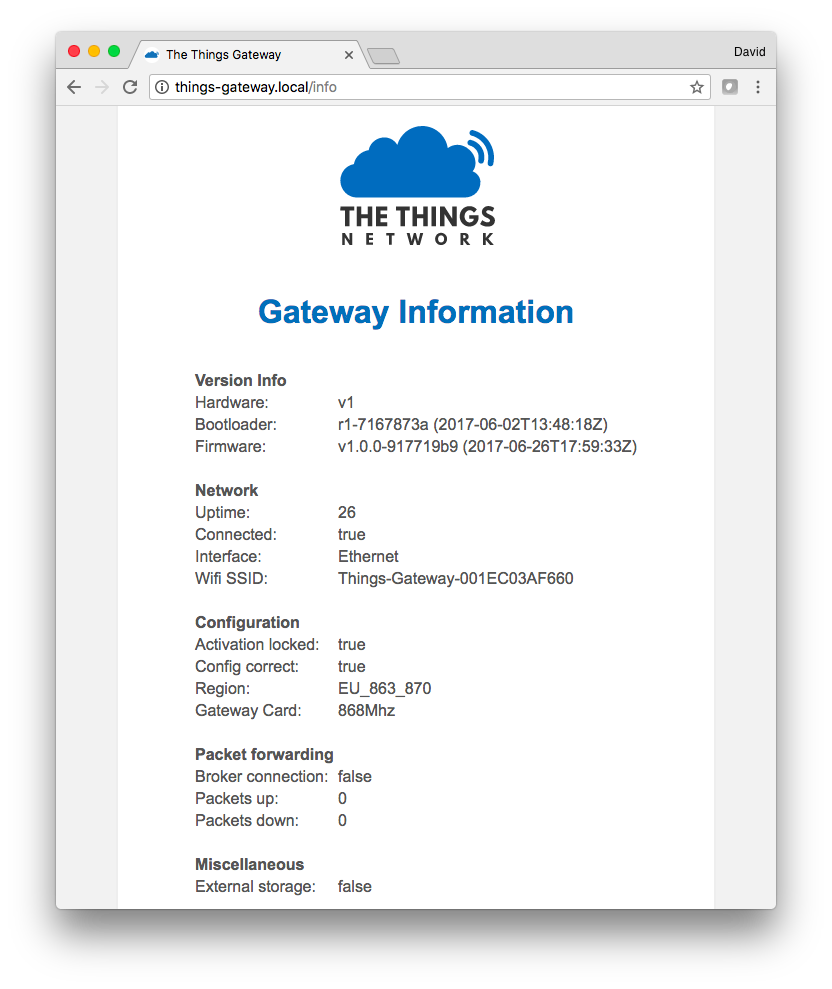 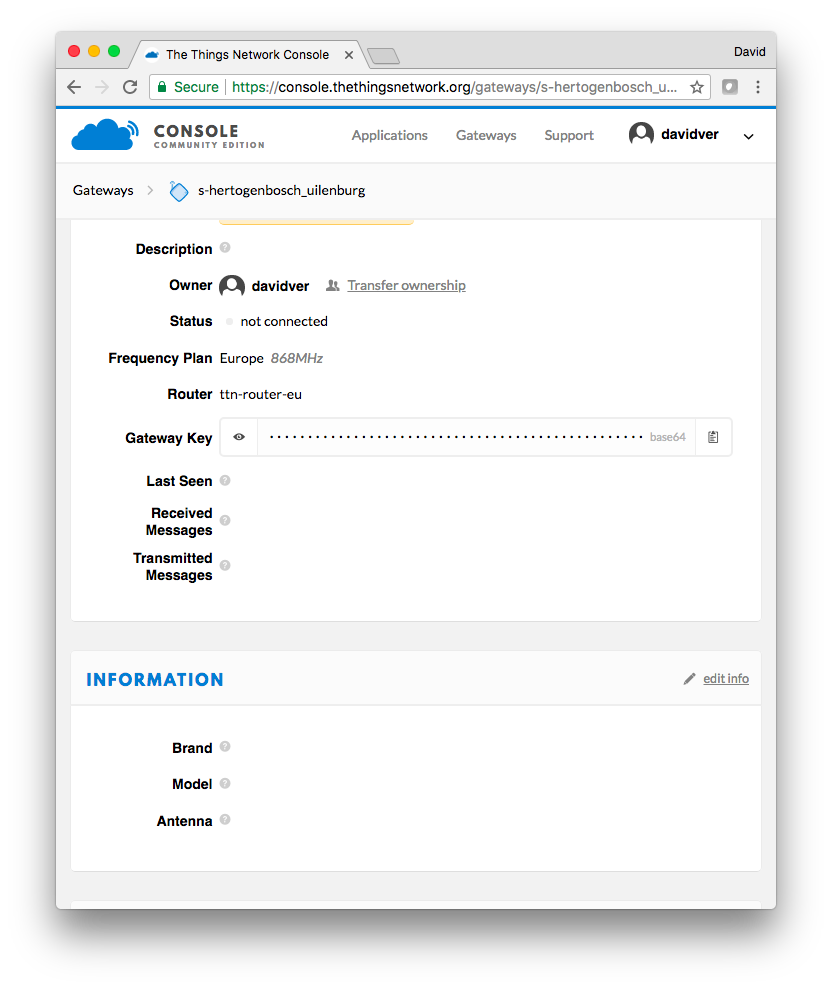 I can’t get my gateway ready to work. After resetting, everything look to go smooth including configuring the gateway. But after a short while, it keeps rebooting. Also no packets are being sent.
Tried to reseat the lora board, but no success. See my configuration page of the gateway that looks correct during some time between reboots. 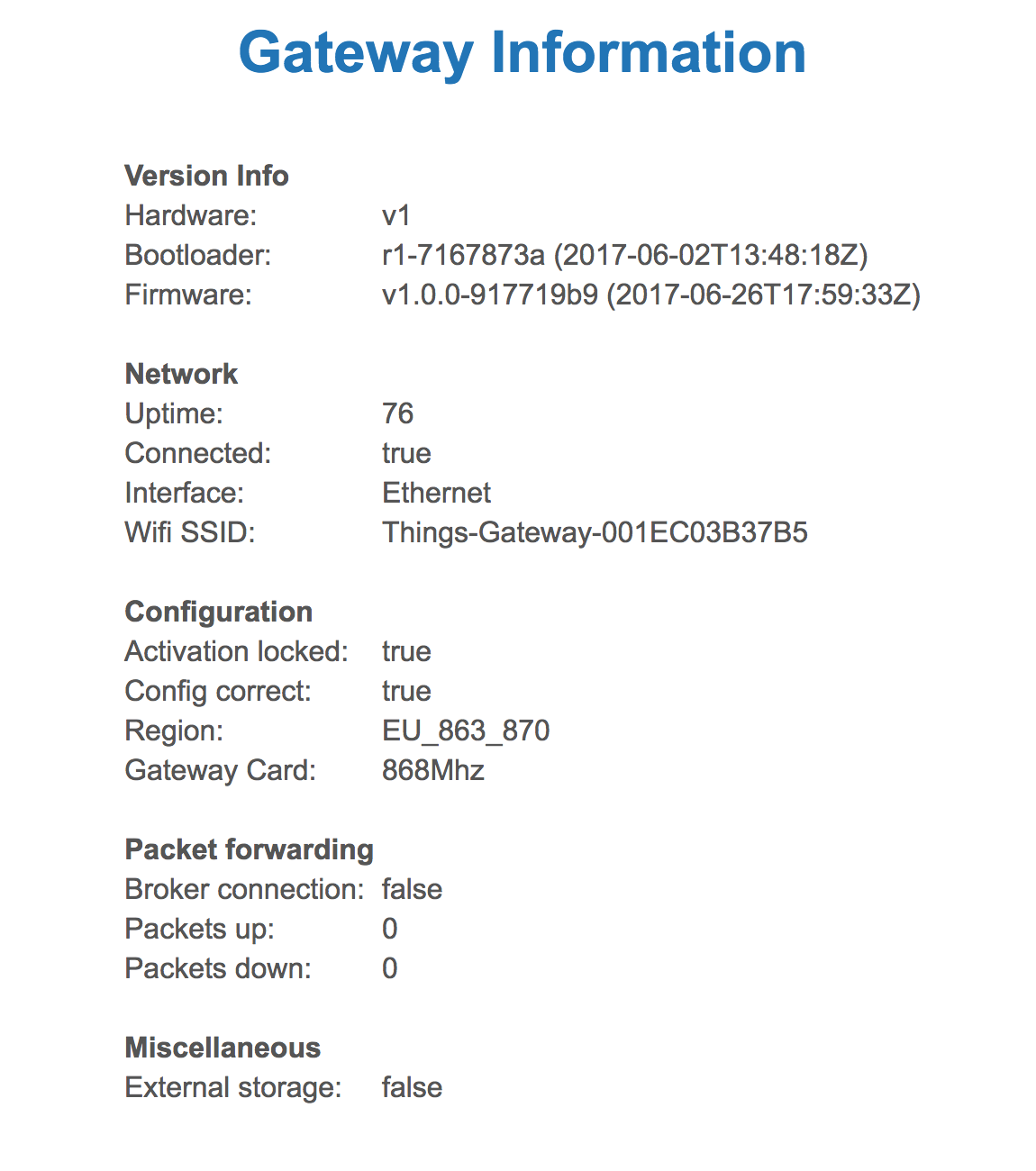 Gateway has been seen by TheThingsNetwork for a short while: 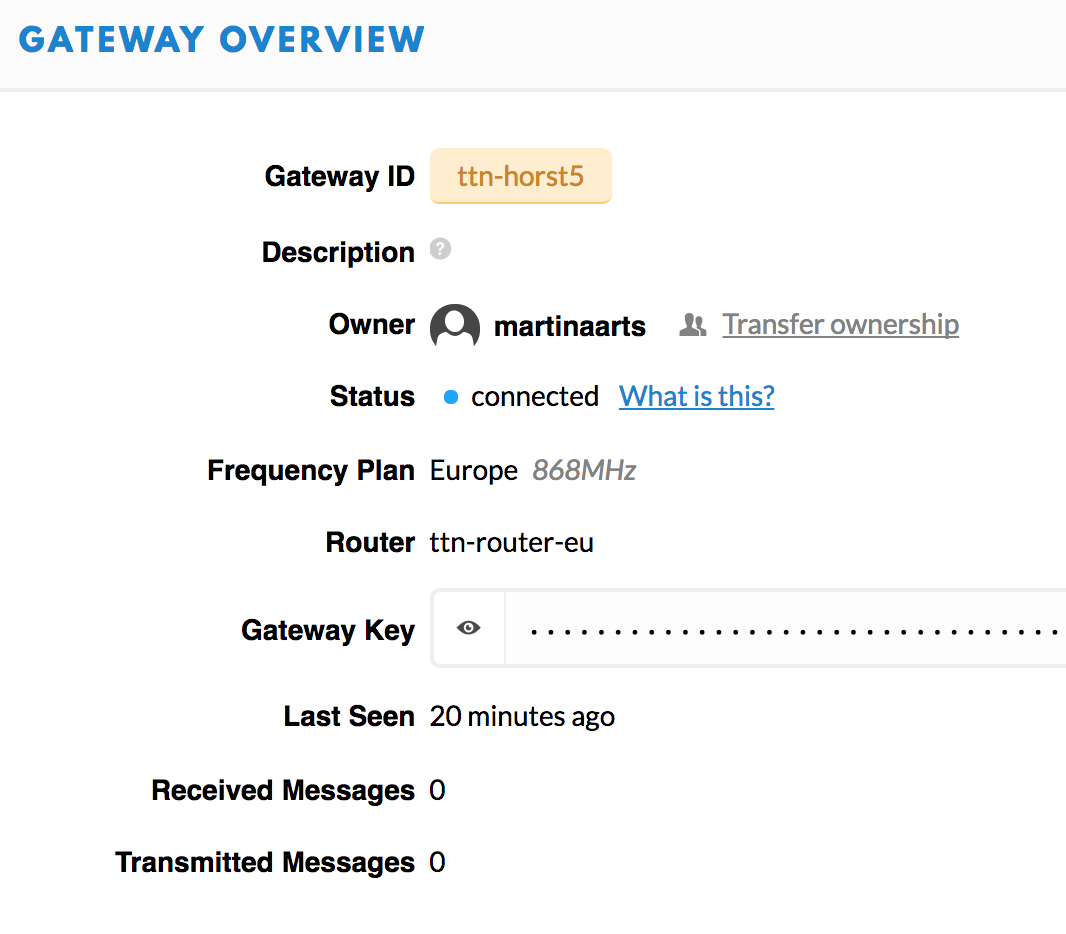 In TTN they ought to be able to see how many people are registering a Gateway, and how many Gateways are successfully connecting… so as to get a view on the scale of the problem. Most people posting here are posting messages of frustration, but it’s hard to tell if DOA (also known as ‘doorstop’) is the norm or the exception…

Anyway… to those out of luck… I feel your pain!

I’ll see if I can get that list of reboot reasons.

Yes, please. Many have asked, and that list alone might be so helpful, if only to decide to just wait rather than spending time trying to decipher the serial output (like what does HTTP: Got 1232 bytes refer to?), or rather than trying all kinds of different ways to activate the gateway.

Why does it take TWTG more than 40 days to publish that list?

Our friends at TWTG.io are working on getting everything ready for Github. They promised us that we could publish it during the conference.

When ready earlier, please, please just publish it and not wait for the conference? There are many smart people around here who might find the flaw that makes some/many gateways reboot—I’d say that such would make an even better announcement at the conference!

Some people here might even find a fix, if the following is documented too:

what would be the process to flash it onto the device?

Not sure if useful to others, but I activated my gateway entirely by Wifi using the latest version of win10 as follows:
N.B. If something has gone wrong, then I understand you can reset it to factory before trying this again?

Right so now what?

Hi, guys (@htdvisser, @rish) , also checking in to report a similar reboot loop issue as reported elsewhere in this thread.

Although I managed to register / activate my (finally!) received TTN gateway relatively easy, it will maintain a stable connection only for some 5-10 minutes and then will spontaneously reboot. After a few iterations it may become stable again for a short while and then enter the reboot loop again.

Any assistance / progress reports regarding this issue would be appreciated.