I got confused after read all the discussion here how to calculate that how many sensors can be severed by a gateway. If we take 24 hours as the time period, and all the 8 channels are used at a gateway, duty cycle is 5%, and SF is 7-12. If we assume the packet arrival data is \lambda which follows PPP. How to get a theoretical value for the maximal number of sensors covered by a single gateway? @Thomas

It is true this: Wavion is the best cost / efficiency / number of nodes / reach system?

There is a number of existing LPWAN-technologies competing to provide M2M connectivity and secure niche in the IoT universe. Most of well known LPWAN approaches are quite recognizable thanks to sizable marketing efforts though most of it practi [...]

@aliekens @scle
If we look at the joining message, it’s is totally up to the end-device to choose the SF and central frequency to send a joining request to gateway. The collisions for joining message must be very high. Joining message delay is also comparatively large. Even in the case, where there are only 5 devices under a gateway sending joining request message, the message will collide. Did you simulate for that? What are your views about it?

Even in the case, where there are only 5 devices under a gateway sending joining request message, the message will collide.

Hardly can find this absolutely true. Although, the messages, of course, MAY collide.

Here’s a conclusion from a recent article regarding LoRaWAN scalability:

“Do Long Range (LoRa) Low-Power Wide-Area Network(LPWAN) scale? According to our study presented in the paper current installations based on LoRaWAN do not. (…) However, our study also shows that LoRa networks can scale quite well if they use dynamic transmission parameter selection and/or multiple sinks. For both aspects more work is required as protocols for dynamic transmission parameter selection and strategies for useful sink deployment must be developed” 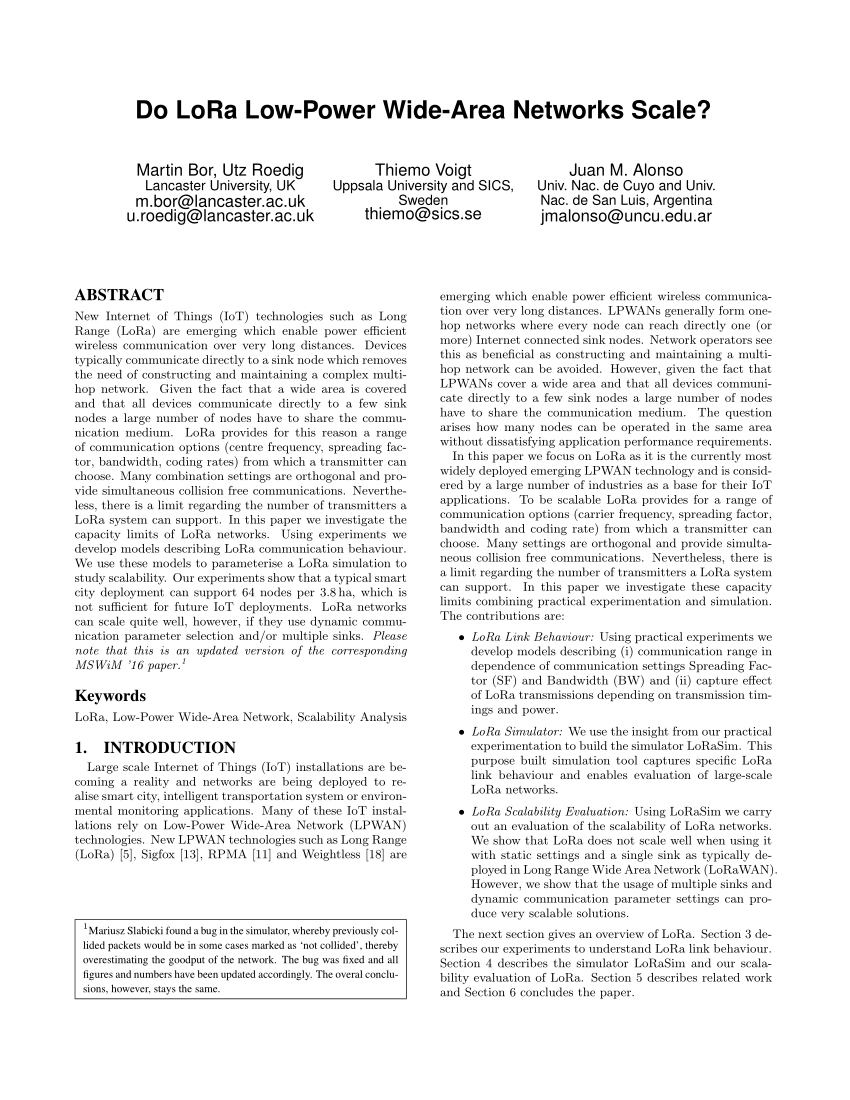 Interestingly, the article doesn’t mention Adaptive Data Rate (ADR), at least not in those words. Possibly because it’s not implemented in current networks (e.g. see https://github.com/TheThingsNetwork/ttn/issues/265 )

Isn’t ADR a part of this?

Isn’t ADR a part of this?

Exactly, which is why I wrote “at least not in those words”. I was under the impression that ADR was the terminology that Semtech / Lora Alliance generally used for this - so I was a bit surprised they didn’t mention that term when the whole article revolves around this topic, almost as if they didn’t realize this is already being developed (and possibly already in place in some implementations?).

and possibly already in place in some implementations

Definitely already in place in some implementations.

Some discussion on this in the comments at https://www.linkedin.com/pulse/how-many-devices-does-one-lorawan-gateway-support-120-jay-wey

Well written article. As the authors say, indeed an impartial and fair overview of the capabilities and limitations of LoRaWAN.

Most applications I’ve seen for LoRaWAN requires a packet every 1 to 15 minutes (so 4 to 60 pkt/h) but for whatever reason the authors of the article chose to show curves for up to several thousands of packets/hour. Do they thinks it’s some kind of “long range Wifi”? Thousands of packets/hour also mean draining a battery fast, and it’s not what those class of networks were designed for, it’s even in the name: LPWAN, for Low Power Wide Area Network.

Sylvain, the discussion is not about how many messages a device can send, but how many a gateway can receive. Considering that a gateway has a range of multiple kilometers, it is not unthinkable in an urban setting that there are 1000 devices sending 1 message per minute. At these rates, the public ether becomes plugged up.

Don’t forget a gateway picks up all messages from all networks. E.g. your TTN gateway will also pick up the messages from other telco’s operating a LoraWan network in the same region and vice versa.

Thousands of devices per gateway isn’t unreasonable. E.g. in a mid-sized Western European city, there are around 2.000 utility meters per square kilometer. If a utilities company chooses LoraWan to communicate quarter-hourly meter readings, you’re looking at 4.000 messages/hour/km², for this application alone.

That is assuming all networks use the same optional frequencies for EU868 or same band for US915/AU915.

Afaik all currently operational networks do?