What is the maximum data output of a LoRaWAN gateway?

If i had a friend, and he would be willing to install a LoRaWAN gateway in a “strategical interesting point”, he probably will ask me “How much data throughput will be there if the gateway is running on its maximum?”.

Can anybody answer this question, adding some calculations? Pls: kilobyte/hour

Just some references from Slack, yesterday:

So. I’m planning to run a gateway off 3G/4G. Does anyone know/have experience with how much data I need per month?

Ive read figures around 200MB
the real answer is off-course: “it depends”

I think even if the gateway is not ‘busy’ with your nodes, there could be other nodes from someone else that the gateway picks up and forwards. So you’ll need to account for this too.

you will need around 500MB/month for GW status messages etc. So I would suggest that 1-2GB/mth would be a good start

Just some more numbers from another topic:

One of our 3G gateways was measured at about 5mb/day.

Our own gateway here in Apeldoorn uses up to 6-7 Gig a month, however not representative as we feed multiple backends.

And some more from Slack today, emphasis mine:

I heard rumours that some people have 1GB/month and that that is enough.

I however have no data to prove it.

I’ve had a gateway up and running for about a month now, and it’s sent back around 210MB of data. That includes the resin.io data channels and call outs to TTN for a single temperature sensor sending data every 30 seconds.

I suspect that most of that traffic is resin, but I don’t have the granularity on the network monitoring yet to be confident

yup, that’s the one

And from another topic:

Overall, on the last week that gateway sent about 120Mo (this includes some overhead due to monitoring)

For those who are interested; This is the data on a per day basis that is being registered by the router of our gateway de Mheen in Apeldoorn. Maximum is 8 MByte per day. 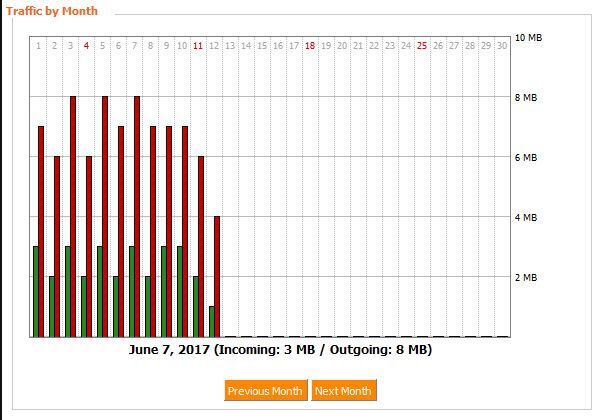 I can tell from practical experience in our Apeldoorn community that our gateway does 10 Megabytes per day data.

hmm… really? 10MB/Day? With an average datalength of 35 bytes this would mean 285714 msg/day. divided by 86400 seconds aday has makes 3.3 msg/second.So your console gateway traffic page must fill up faster than you can read it…

Even with NO payload you get some Traffic. And every Packet adds much more Overhead than you have with the payload.

@moeterbin I was assuming an average payload of 20 bytes and therefore an average package datalength of 35 bytes. Is this assumption wrong? What are then realistic values for the msg/second calculation?

The LoRaWAN payload is indeed in the order of bytes, for communication between a device and a gateway. However, when sending data over to The Things Network, a gateway adds metadata (spreading factor, bandwidth, gateway status) and its communication protocol with the network server can create quite some data overhead. For example, when using the Semtech UDP protocol, the data is sent in plaintext/JSON. That also doesn’t include keepalives, data pull messages…

How can I reduce this?

Considering that most of my nodes send ~ 20bytes/day of actual data to the gateway, it’s hard to understand why the gateway needs to send literally 500x that amount.

Since I’m using a cellular backhaul, this ends up being a definite pinch to my wallet too.