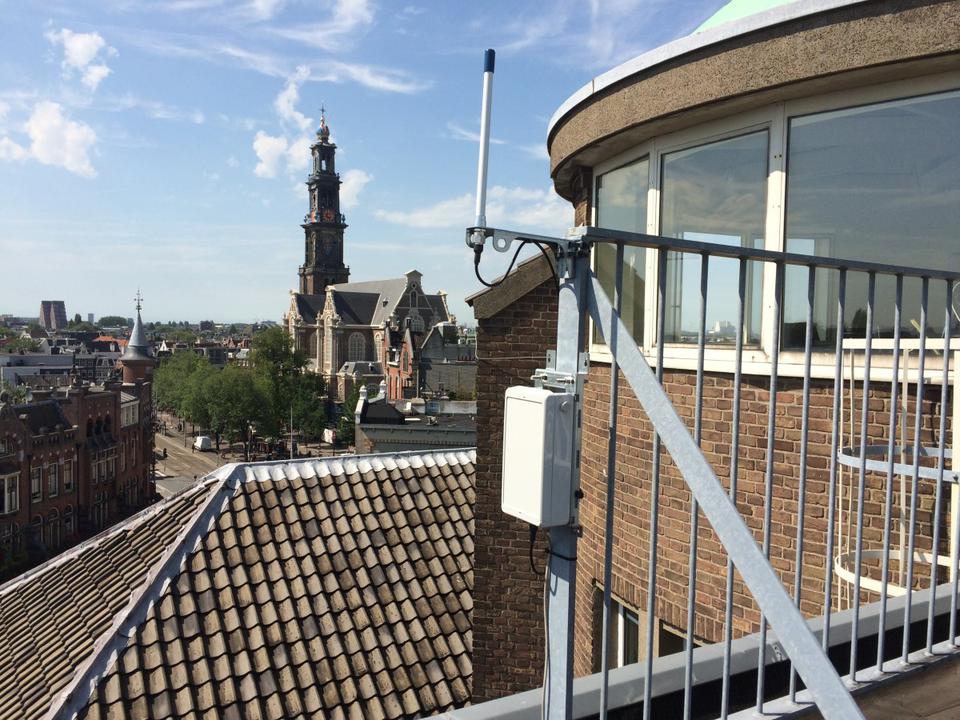 Many existing gateways use this hybrid form. During a great  [West-Brabant kick off](http://https://www.meetup.com/The-Things-Network-West-Brabant-Community/events/235080616/)  the group discussed the difference between indoor gateways with external antenna's, and true outdoor antenna's. This was a very interesting discussion since there were quite a lot radio amateurs. They were new to LoRa, but they had a lot of knowledge about radio transmissions in general. And that's where it became interesting.

Although I am aware that in the existing TTN global community already radio amateurs are present it could be a great contribution to share the do's and don'ts. We could use this to develop a step-by-step for new gateway owners considering to extend their range.

We agreed that I'd post my current setup as a starting point. I'm sure it could be more optimal, but it does perform pretty well and I'll improve this story based on the feedback I get.


Obviously for adding an external antenna you need an antenna and a cable. An important question is what gain you want use. The gain is a value that describes the radiation pattern. If it’s low, the shape of the radiation is like a round ball. If it’s high the it’s a narrow beam much like the light from a lighthouse. Keep in mind that antennas do not amplify the signal, so the only thing they can do is act as a kind of lens to direct the signal in a pattern that you’d like it to do. In this example the low-gain ball will have a lower range than the beam from a high gain antenna. But the disadvantage is that if you put the high gain antenna on a high building you will have a weak spot right below the antenna which you wouldn’t have if the pattern would be ball shaped. <o:p></o:p>

The antenna I use is a GP901 ground plane antenna. (http://www.sirioantenne.it/ru/cellular-base-ru/gp-901-cgp-900-c/). It has a gain of 5 – 8.15dBi. This is too high, since you’re only allowed to use 2.15dBi for sending. Because of losses the gain may be slightly higher, say 3dBm or so, but above that you should limit the sending power which can be done in the gateway configuration. This leaves you with the same high-gain pattern for inbound messages but it will cause a situation where nodes are out of range to get a reply while they were in range to successfully send the message itself. <o:p></o:p>

Opinions whether or not this asynchronous situation should be avoided differ. Some argue that possible send and receive range should match. Others consider the additional receive range as a free bonus. You should determine this for yourself, but if you want to avoid this you should select an antenna with a lower gain. <o:p></o:p>

For the coax cable it’s pretty simple; cheap cable has a high internal resistance which destroys the range of your signal. It’s advisable to use something like aircell 5 or equivalent cable which requires 100 meter or so until you get a significant loss

Update: following a forum discussion on this subject 3 main types were identified.

2) Sirio GP901  (http://webshop.ideetron.nl/GP901C) , about 100 euro. A higher gain resulting in a more narrow beam. Still the black spot while mounted on a 23 storey building was to floor level less than 50 meter. The specs show the average frequency is with 900mhz either a bit too high or a bit too low, but ttnmapper measurements show it performs pretty well on 868mhz.

3) Procom CXL 900-3LW-NB/868MHz, about 250 euro. Top notch stuff. This might be overkill when placed on top of your house but if you manage to get a really good, high spot it may make sense to try to squeeze everything out of the opportunity.

There are two interesting alternatives. The first is an DIY alternative for #1, described here: https://www.thethingsnetwork.org/labs/story/homemade-outdoor-868mhz-antenna

And then there is the Sunhans antenna: https://nl.aliexpress.com/item/2014-Sunhans-790-2700MHz-15dBi-Omnidirectional-Fiberglass-Antenna-For-3G-4G-GSM-CDMA-WCDMA-Cell-Phone/2035550182.html?spm=2114.13010608.0.0.WJfq8s&detailNewVersion=&categoryId=5092201. This was mentioned being the best bang for bucks. I assume it will perform somewhere between #1 and #2, probably closer #2 than to #1. A few community members ordered one and some initial plans are made to keep a test&measure meetup including all of the antenna's mentioned above.


Because there were doubts about which range would approximately be possible with such an antenna I will show some examples. They will also show that statements like ‘with an indoor gateway you will hardly reach a few streets away from your house’ are somewhat negative. The measurements are from an Sirio GP901 antenna. <o:p></o:p>

First an example of my own house. It’s in the middle of a residential area, the whole neighborhood consists of normal houses of the same height, ground is flat, and the antenna is on a 1 meter extension on the chimney. The green line marked by the arrow is about 4km long<o:p></o:p>

As a comparison the same setup in a rural, flat area. It’s also mounted on the chimney but here an extension of 2,5m is used. As shown the range is vastly increased. This proves pretty well that an indoor gateway with external antenna does not suffer too much from the fact that there are losses in the coax cable, provided it’s of good quality. <o:p></o:p>


The choices you have is either to build your own mounting extension like below, or use something that is kept together with screws and pipes.

25x25x2 square pipe is very suitable and if you can’t weld it yourself it’s surprisingly cheap to have it done in a metal workshop. The alternative is to use something like scaffolding pipes. Usually the antenna will come with clamps that fit this size of pipes, and it’s also nice that they are already galvanized but that is also counted for in the price.<o:p></o:p>

A rough guess for 1,5 meter the diy way is 5 euro excl welding. Having it weld will be another 10, probably to be paid in beer since it takes only a few minutes. Using galvanized scaffolding pipe is in the range of 25-30 depending on the clamps you need. For sure check if you can find it second-hand because new it’s surprisingly expensive


Disclaimer: I’m a stupid fool with absolutely no knowledge of this subject. Don’t believe anything I say and get professional advice in case of doubt. <o:p></o:p>

As far as I can see there are two things to take into account. Protection of your gateway, and avoiding your house gets on fire. Based on the information I was able to gather it’s pretty hopeless to seriously protect your gateway against being fried. Even when using reasonably priced surge protectors. Not in the last place because even if it would hit somewhere else in your street it’s likely all of your electronic equipment is fried anyway. So I gave up trying.<o:p></o:p>

Protecting your house is more serious. But I’m not that much convinced of the rational need of doing so, and I couldn’t get a solid answer. Many opinions are either entirely dogmatic or focused on a professional setup on a high building, which is a different situation. Feel free to contact me if you think you can tell me more about. Also lighting protection seems to has a weird effect on the radio transmission. As mentioned for the time being this is gut-feeling. Again: If you don’t feel confident and don’t know what to do, get professional advice. <o:p></o:p>

The reason I’m in doubt is the picture below. Assuming an extension of just 1 or 2 meters it seems like the only way the antenna will be hit is when the lighting already decided to hit the roof anyway. It’s well possible that in such case the house will be set on fire, but the antenna has apparently no significant effect on it.

- A clear verdict about lightning protection<o:p></o:p>

- Adding the solution of making an outdoor casing and/or PoE