This is supposed to be a command indicating the frequencies the device can use.
This command is replacing the downlinks that i have scheduled myself. I want to stop this behaviour

I found the following topic and tried every solution i could find there:

Is there any other method of stopping this command from being sent? or at the very least give my own scheduled downlink priority over this command?

Have you read the official guide from the developer?

I’m writing this post as a quick draft that will be extended and eventually turned into a documentation page.

Migrating existing ABP devices requires one of the following: Your gateway is connected to V3, or You update the device address (DevAddr) in your end device(s) with a new device address generated in the V3 console. This option may require flashing new firmware to the device. Read below instructions carefully. If you make a mistake it might not be possible to correct it l…

Yes i have. My devcie is configured exactly like described in the guide and my gateway is connected to ttnv3

Off the top of my head, I haven’t set the Rx2 settings as they are in my nodes firmware already, that’s the only immediate difference I can see.

What is the device & firmware & revision you are using.

Have you tried decrypting/decoding the MAC command to confirm if it’s a channel setup?

Please double check the RX2 settings.
I’ve had the same issue and here it was related to the RX2 frequency which is wrong in almost all preset vendor definitions as it is wrong in the example which anyone copied.

In your screenshot the frequency at least seems OK, but perhaps one of the other settings there isn’t right?

N.B. for the RX2 frequency issue, I opened an issue on GitHub for it as I really don’t know how it should be fixed as either fix is a bad one.

I just noticed you have the RX1 delay set to 1 second.
Since v3 this should be 5 seconds.
You may also have a look at the used delay on your node.

I just noticed you have the RX1 delay set to 1 second.
Since v3 this should be 5 seconds.

Not necessarily - the standard built-in delay for TTS is 5 seconds. But if your node is running ABP pre-TTS it will have Rx1 set to 1 second and there is no way for the server to update that figure, so it is set on the server to match the device.

OTAA updates it as part of the join-accept so old or new firmware, that’s sorted.

I have tried to decode the package using the Lora Packet Decoder. https://github.com/anthonykirby/lora-packet
But it doesn’t make any sense. It says it’s a Join request with the completely wrong AppEUI and DevEUI.

I am using a HopeRF RFM95W module. With the 1.5.0 version of the LMIC library.
It seems that whatever the commmand is our software is not handling it. The problem is that this concerns devices that are already in use and cannot be modified. Therefore i’m really hoping there is some way to prevent this command from being sent without any changes to the end device.

@TD-er
I have checked the RX2 frequency and it looks to be alright. I have also tried to remove it from the settings, but this doesn’t make a difference.

A version that knows what a MAC is but can only really process ADR requests.

Try the MCCI LMIC 3.1.0 or above - that is declared as being actually compliant - I’ve been using 3.2.0 for non-critical devices with no issues and using 4.0.0 on the bench.

Leave the Rx2 settings alone for now, getting “a stack that can mac” is the priority here.

Try this for packet decoding, it makes using the Kirby code base simpler and has lots more explanations:

Thank you for your help, but that is not an option right now unfortunately. In the next iteration i’ll be sure to update my software to something that is completely compliant to prevent these kind of issues.
My current pilot devices can however not be updated with new software.

I’ve also tried the online packet decoder. This gives me the same response:

LMIC I can do, decoding MAC commands not so much. But just checking, is this an encrypted packet or have you got it from the web console?

The hex-encoded packet does not look to be a valid LoRaWAN frame.

We can say this by just looking at first byte on the hex-encoded packet.

The LoRaWAN specification describes the first byte as follows 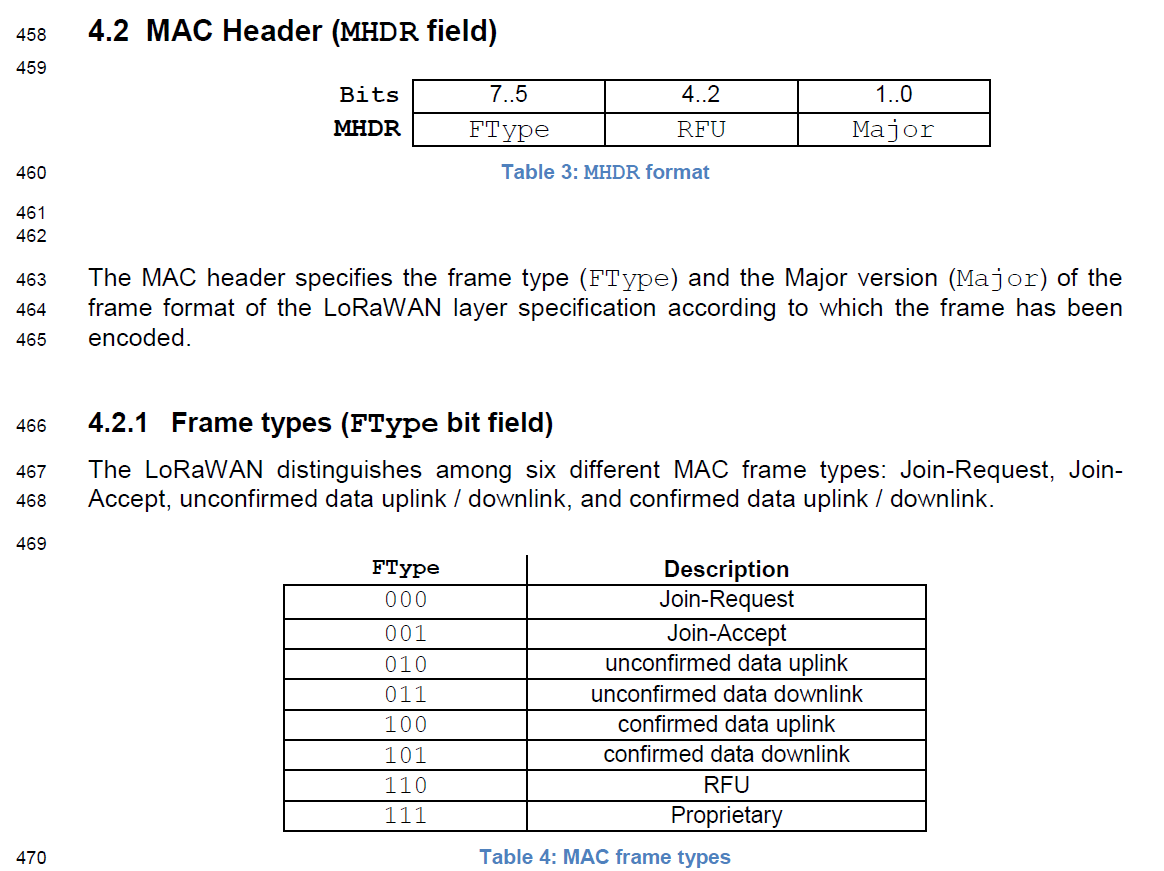 This means that 0x05 corresponds to the MHDR field.
The MHDR field decodes to the following:

It has to be noted as well that the JoinReq packet is not encrypted. This packet is only authenticated by the MIC computed using the AppKey.

Therefore the possibilities to have this happening are:

This packet has been transmitted by a LoRa (Not LoRaWAN) device. There is nothing that can be done. Just ignore this packet.

The OP implies that this is from his gateway - if it was a LoRa packet surely it’s preamble, id code and inversion bit or what not (this area of LoRaWAN I’m still learning as you can tell) would be totally wrong. And very co-incidental that it be transmitted dead on the start of an Rx window.

The Gateway is setup to forward all received packets including the ones having a wrong CRC.
The Gateways should be setup to only forward valid packets.

He says it’s a downlink.

The end-device stack is not correctly implemented. As you say that LMIC is the used stack I doubt this to be the case. The JoinReq packet definition is the same since LoRaWAN 1.0.0

He says it is a downlink after a join.

Hopefully Mr @577e4e6de7caf50f0070 will answer my question regarding if it’s an encrypted packet or if it’s taken from the web console.

But given that he’s using a very old un-compliant version of LMIC, anything could be happening!

Even if this is a downlink the MHDR field is always transmitted not encrypted. Which means that this downlink is not a LoRaWAN packet.

In case this packet is a downlink I don’t think this issue to be related to the end-device.
I would more suspect a gateway setup issue.

I have doubts that the TTN network server would send to a gateway a non LoRaWAN packet.

My packet is a downlink i receive immediatly after sending an uplink. Not after a join.
I got the string directly from my arduino which prints the exact bytes it receives in the downlink.

I’ve been trying to decrypt the message using this go library lorawan package - github.com/brocaar/lorawan - pkg.go.dev, but i’m really not sure if its encrytped or not since i don’t exactly understand what it’s supposed to be.

When i change the gateway to use the V2 implementation or a private lora backend i do not have these problems. The only thing i change about the gateway is the forwarder address.

I will let you know if i have any succes getting more information out of the packet.

If I understand well the hex-decode packet is what your end-device receives (end-device log would be helpful).
Then this may mean that the problem is on the end-device side. Maybe a wrong handling of the end-device radio reception buffer.

As @descartes indicated maybe the only way to fix this would be to upgrade your firmware to use a more compliant stack implementation.

Would it be possible for you to check what the gateway really transmits (gateway log would be useful)?

I got the string directly from my arduino which prints the exact bytes it receives in the downlink.

So, not encrypted then. Is there any chance you sent a confirmed downlink at some point? Because if it’s never ACKd, the v3 stack is very very persistent (as I found out).

When i change the gateway to use the V2 implementation or a private lora backend i do not have these problems. The only thing i change about the gateway is the forwarder address.

So if the device is on v3 but you change the gateway back to v2, this problem goes away?

Even if this is a downlink the MHDR field is always transmitted not encrypted. Which means that this downlink is not a LoRaWAN packet.

Ah, OK. Really must fill in the blanks on the bit between “send this” and the app server.

Maybe write a device stack of my own - I mean, how hard can it be!

In case this packet is a downlink I don’t think this issue to be related to the end-device.

As I don’t recall 1.5 printing any MAC commands as standard, unless this has been added by Mr577, it will take a bit of testing to figure out what it might actually mean.

As @mluis says, an actual gateway log would be good, even better run the gateway and device web consoles and capture the exchange in verbose mode (screen shot) and give us the full JSON of the downlink (text) and even better, both!

@577e4e6de7caf50f0070 Can you also post the end-device source code excerpt where you execute the print of the log?

I’m wondering if the hex-encoded packet that you provided is the full LoRaWAN packet or just the application payload contents.

The problem goes away when i switch to v2 yes.
Here is part of the log of my device where the message is received:

Now that you mention it i did accidentally shedule a confirmed downlink at some point. I will try to clear the queue.

The entire packet is printed. Its taken from the LMIC.frame and LMIC.dataBeg fields.