I successfully connected my RN2483 board with OTAA to the new backend last night - and documented it here https://github.com/lukastheiler/ttn_moteino .
Now today, I just get:

Now i just restarted my gateway with

MQTT shows me the messages I’m sending - so all is good again.

Since reboooting the gatway can’t be the solution, what am I doing missing / doing wrong?

I’m having the same behavior over here. Yesterday was OTAA accepted, this morning when I came back in the office it was denied. After a gateway reboot ( sudo systemctl restart ttn-gateway.service ), a OTAA join is accepted again.

@lucas Did you fix this issue?
Any help is welcome

This might be related to this topic. Or can you still receive ABP activated nodes and is this specific to OTAA. If that is the case then there is no relationship of course.

I don’t think its related to the gateway. If I keep repeating mac join otaa , I eventually get a accepted". Lukas

@lukas How many times did you repeat this? This morning I had the same issue again. Tried to join for 6 times, all times denied. When I restarted the gateway software (sudo systemctl restart ttn-gateway.service), the first attempt is accepted directly.

Any help is welcome

PS. Did not had time to test if ABP activated nodes able to send data at that same moment… Will try that next time.

I can’t tell right now. I have 2 cronjobs now, one restarts the gateway every hour, one that reinstalls the latest gateway software every night. Brute force, baby.

The last coupe of days, OTA with my Moteino works now very fast, it gets a session immediately. I am not sure how long the keys are up though.

But since we’re in beta still, its quite difficult to figure out whats right and wrong

Yes, very much by design:

[…] you should realize that these frame counters reset to 0 every time the device restarts (when you flash the firmware or when you unplug it). As a result, The Things Network will block all messages from the device until the FCntUp becomes higher than the previous FCntUp. Therefore, you should re-register your device in the backend every time you reset it.

So, when using ABP for production, you should save the counters in non-volatile memory. For insecure debugging, one can disable the check.

I am having the same problem with OTAA procedure! At the startup of both gateway and end-node the OTAA works and the connection is established. As soon as I unplug the end-node from power, and I plug it back again to start a new session, I can’t activate the device any longer, unless a reboot of the gateway is performed!
ABP works just fine instead, with no need to reboot the gateway each time.

My end-node consists of an arduino+dragino shield, and I am using a Kerlink Station as gateway. The arduino’s sketch that I am currently using is the “ttn-otaa.ino” example provided by the LMIC library.

Am I missing something in the gateway/node configuration? Is really that the way it is supposed to work?
Any help is greatly welcome!

In Over-the-air-activation OTAA with LMIC, @matthijs suggested for LMiC nodes:

Perhaps your clock is inaccurate, but the error is negligable at the slower SF ratings? To check, add this to your sketch (somewhere during setup):

This tells LMIC to make the receive windows bigger, in case your clock is 1% faster or slower.

I know that @salvatore_forte already tried that, but it made me wonder about timing issues.

As rebooting the gateway works for both a Kerlink Wirnet Station and an ic880A/Raspberry Pi 3:

*) @salvatore_forte, can you check if the gateway receives the downlink from TTN? If you cannot check that, then: if you know that OTAA fails after, say, 3 hours, then what if you restart the gateway, wait for 3 hours and only then do the first OTAA?

For debugging it might also be useful to test if regular downlinks still work after some time?

first of all, many thanks for the help! I made the test that you also suggested, checking if the response packet from the TTN server gets back to the gateway. The answer is yes! Here you can find the response that I get after manually launching the poly_pkt_fwd in the SSH client prompt: 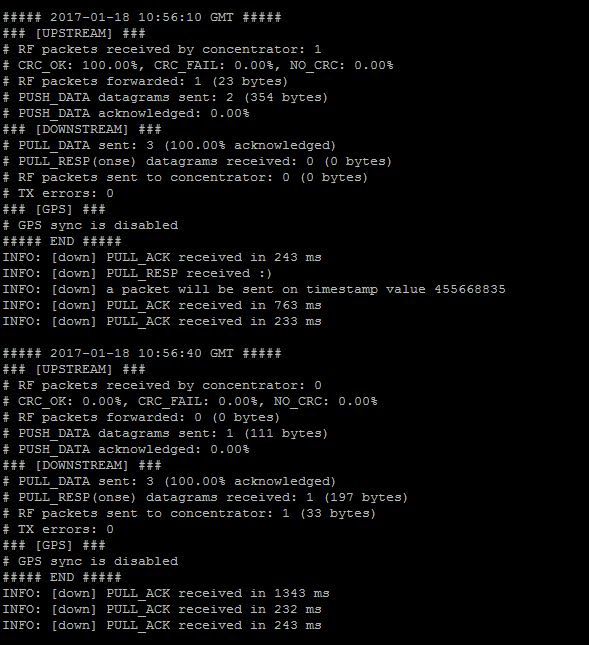 As you can see, the network server scheduled a response to my join, which was successfully sent back to the concentrator, since TX error field is equal to 0.

Does a gateway keep track of the downlink timing itself, or does TTN give the gateway an exact timestamp at which the downlink must be sent?

TTN provides the timestamp based on the timestamp in the original join request. That timestamp is not related to wall clock time so in a window of a few seconds it time synchronisation should not be an issue.

If the issues start occurring after the gateway has been running for a few hours my first suspicion is firewall issues. When the gateway is restarted the connections are fresh and the firewall will forward the packets to the gateway, after a few hours ‘connection’ time-outs will have kicked in and packets may be lost.
To debug: install tcpdump on the RPi and wait for the moment the join fails. At that point in time start tcpdump and check for traffic on port 1700. You should see both a packet to TTN and a few seconds (about 4-5) later a packet from TTN.

if I run a tcpdump on port 1700 in the event of a join fail I can see packets sent by the gateway to the network server, and as response, back to the gateway. See the screenshot below: 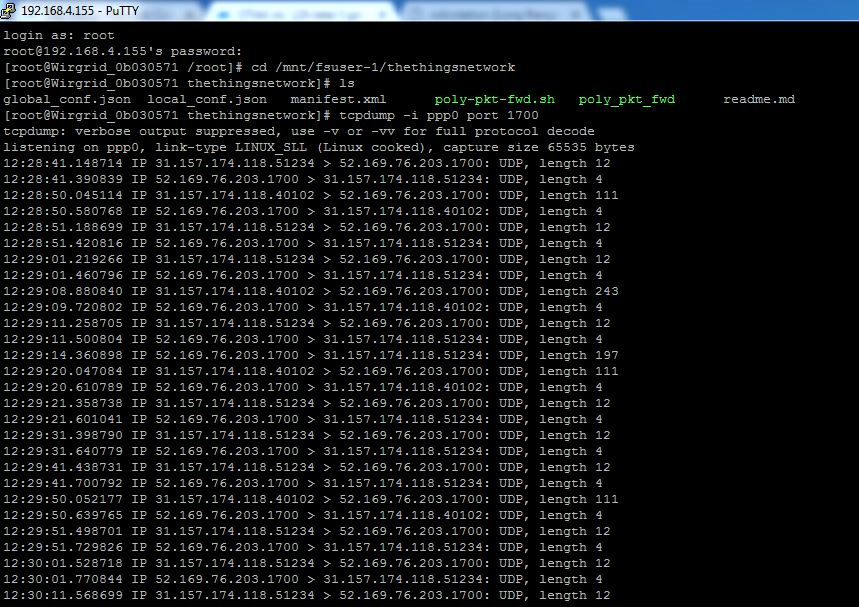 Can you give an indication about how long it takes before the problem shows? And can two devices do a successful OTAA before the gateway needs a restart?

So far we know it’s not a firewall issue as the Join Accepts are received by the gateway. And the problem occurs on at least two different type of gateways. Just some more shots in the dark:

the network server scheduled a response to my join, which was successfully sent back to the concentrator, since TX error field is equal to 0

What would account for the difference between receiving 197 downstream bytes and only forwarding 33 bytes to the concentrator? (It seems a join-accept message from gateway to node is 28 bytes, so 33 bytes towards the concentrator might suffice.)

As for those 33 bytes that got forwarded:

And for further debugging:

The screenshot that shows that 33 bytes got forwarded to the concentrator, shows the 30 seconds statistics. For EU863, receive window JOIN_ACCEPT_DELAY1 is 5 seconds, JOIN_ACCEPT_DELAY2 is 6 seconds. Matching realtime logs might help debugging.

And how long was the gateway running for the above screenshot? I wonder what the timestamp 455668835 means.

(Please, next time post text rather than screenshots? Just indent with 4 spaces to get scrollbars for long lines.)

With software version based on the semtech forwarder below 3.0 the data is send to the concentrator as soon as it is received. If another packet is received during the interval between receiving the first and transmitting it the data from the first packet will be lost. Poly_pkt_fwd is based on the below 3.0 versions for most platforms. (I know there is a newer version for Lorank8)
Looking at the tcpdump log this should not be an issue here.

The timestamp in the packet to TTN is set by the concentrator. TTN adds a fixed amount to it (depending on the window to be used) and includes the result in the transmit packet.

See the screenshot below

Could you create a new trace with a successful join so we can compare the data? If possible use ‘-X’ so we can see both tcp header and data. (A trace with -X for a failed attempt would be good as well.)

sorry for the late reply, I didn’t have the gateway with me to make a new trial. Anyway, this morning I couldn’t get accepted on TTN using OTAA activation procedure. However, I would like to share few considerations about the results that I have got so far running both the poly_pkt_fwd and the tcpdump command. 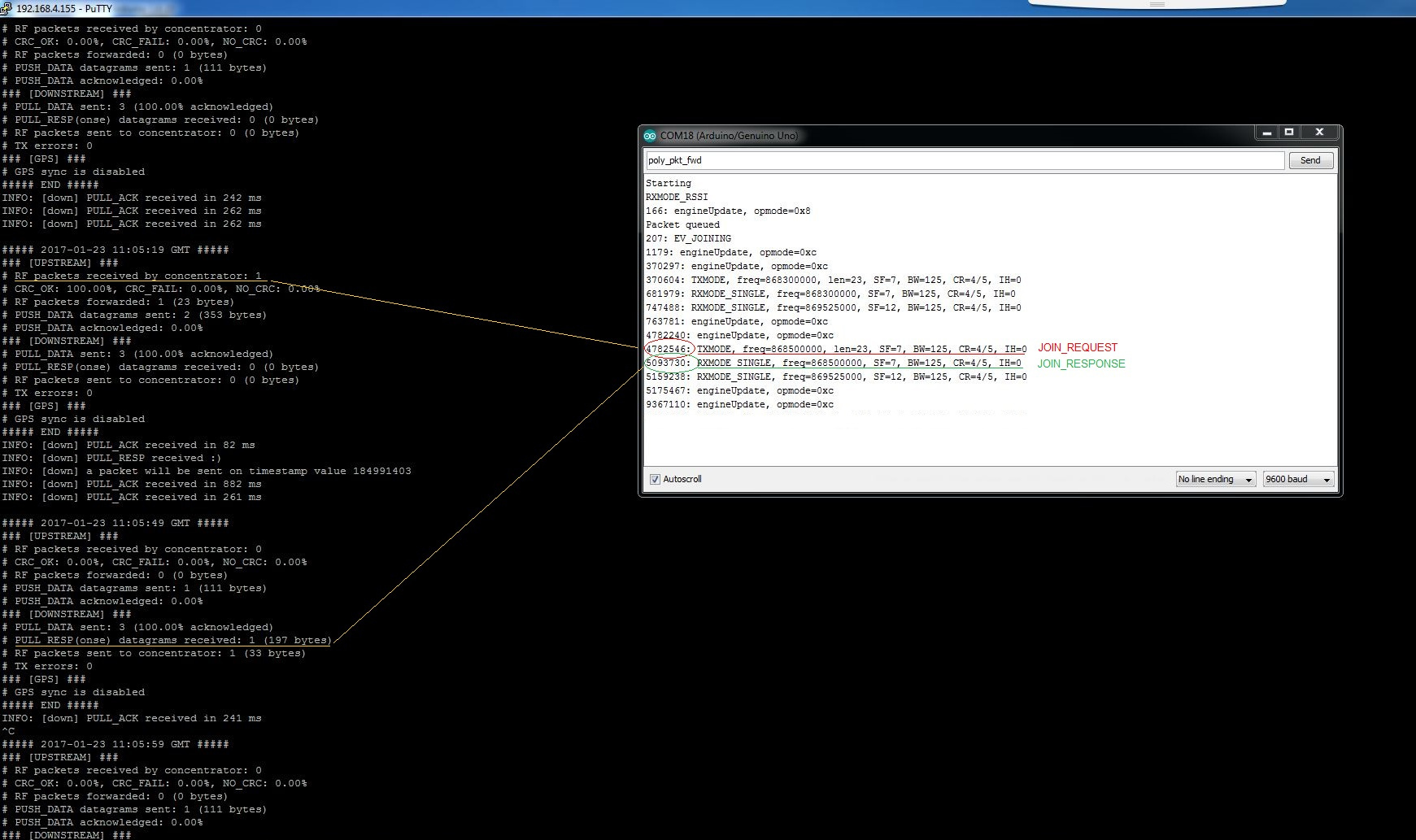 The join_request is correctly sent to the webserver, and consequently the join_accept message is received from the gateway, so we can definitely exclude missing communication between gateway and server. Furthermore, looking at the first picture, you can also see that the RF packets is scheduled to be sent on a specific timestamp (still not sure who is defining it). I guess the problem stands in the last part of the communication chain, so the Arduino in somehow is not receiving the join_accept sent on Lora side from the gateway (for windows slots synchronization?)

To further confirm this result, I have also noted that using the other activation procedure (ABP) I can correctly sent packets from my Arduino node to the TTN backend server (they are shown in the TTN console), but I can’t get back message the other way around as seen with OTAA (I simply tried to send few packets from TTN device view within the console but I couldn’t see the packets back in the serial monitor, even though the downlink packets was successfully sent to the gateway).

The join_request is correctly sent to the webserver, and consequently the join_accept message is received from the gateway, so we can definitely exclude missing communication between gateway and server

I have also noted that using the other activation procedure (ABP) I can correctly sent packets from my Arduino node to the TTN backend server (they are shown in the TTN console), but I can’t get back message the other way around as seen with OTAA

I might have a debug build of the packet forwarder for Kerlink available, however running that build requires copying files to the kerlink and moving them in the right location. Would you be able (and willing) to try it?

I have also wrote to @matthijs to see if he has ever experienced anything like this running the “ttn-abp.ino” example sketch. It looks strange that I can successfully upload packets on TTN but I can’t get anything back from the server. If you think it’s useful, I can definitely try to use your debug build, but first I would wait for @matthijs response…maybe I am missing something on the Arduino side and a fix of code is needed.

Making a tcpdump trace of an unsuccessful join attempt can provide some insight into possible timing issues. If that is not too difficult I would suggest to proceed on that anyway.