I like to experiment with antennas and at my local Hamradio club (Veron/VRZA Twente) a fellow Ham, who loves the J-pole design, wondered if it was possible to make a j-pole antenna for for 868Mhz. So we calculated the design (with help of this calculator), 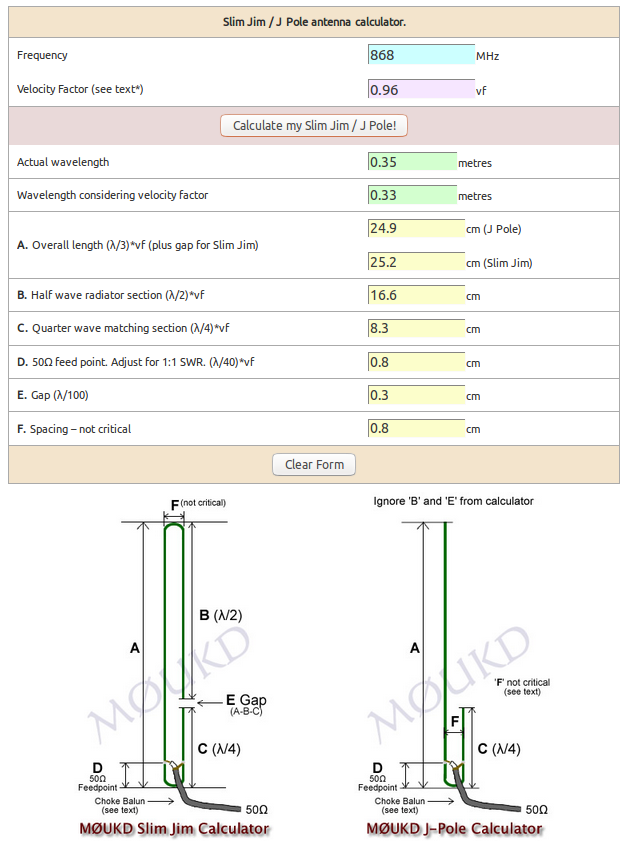 Just a little bending and here are the results 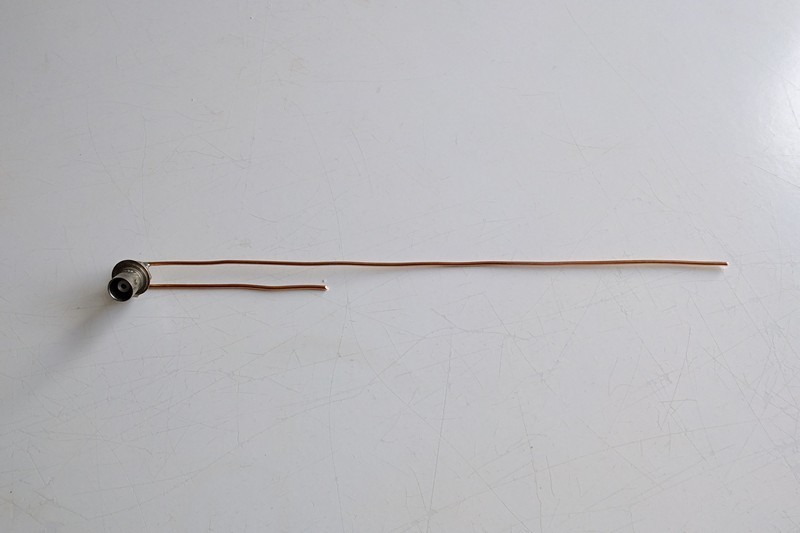 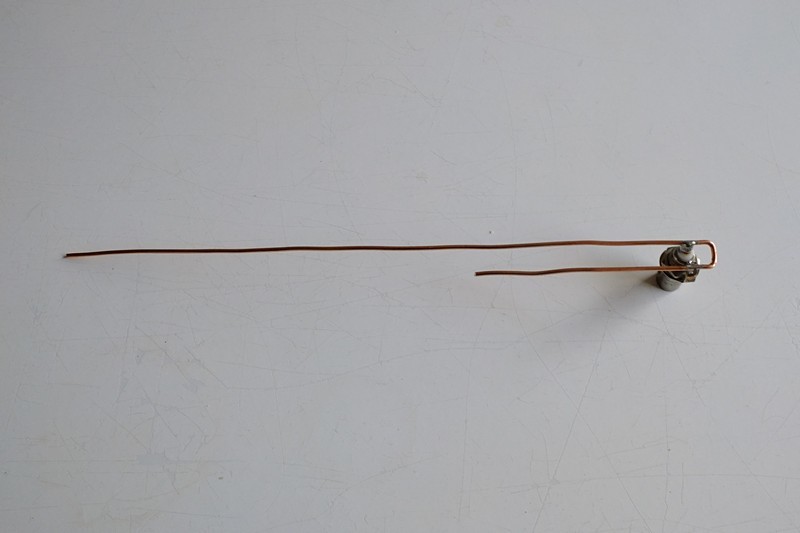 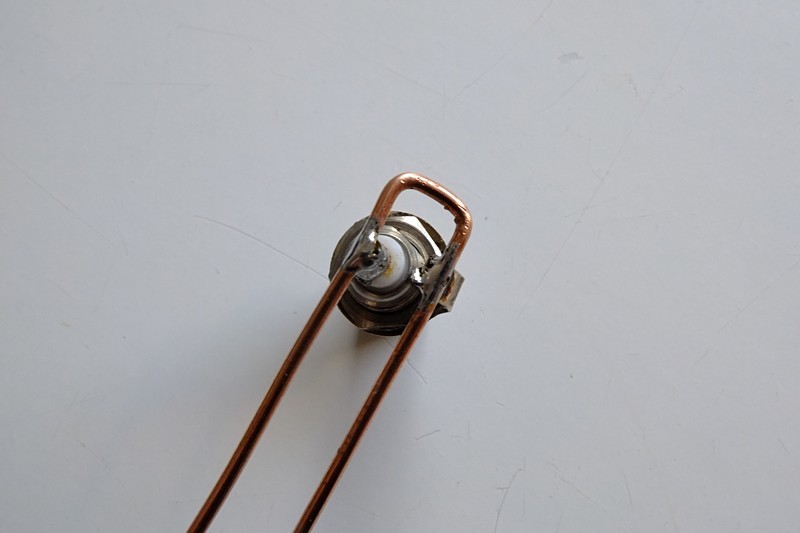 After the building we tested it with a RigExpert AA-600 (which when connected to the computer can work up to 1.4Ghz) from the fellow ham and the SWR dip was right on the 868Mhz. 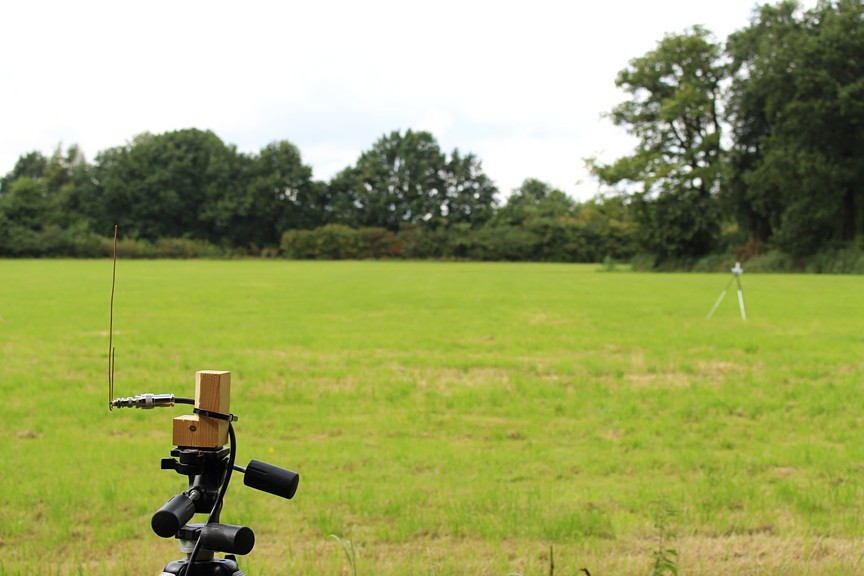 Using the 4NEC2 software I have tried to simulated a 868Mhz J-Pole in freespace and on various heights above good ground.

For these simulations I used the 4NEC2 software which can be download here. Tutorials in 4 parts can be found here : part0, part1, part2. Another good tutorial set is this serie of 4 article publisched in QST : part1, part2, part3, part4 (but off-course you can also google for “NEC antenna tutorial pdf”).

The NEC file : http://www.ph2lb.nl/blog/forum/images/lora/868_jpole.nec.txt for this simulation. 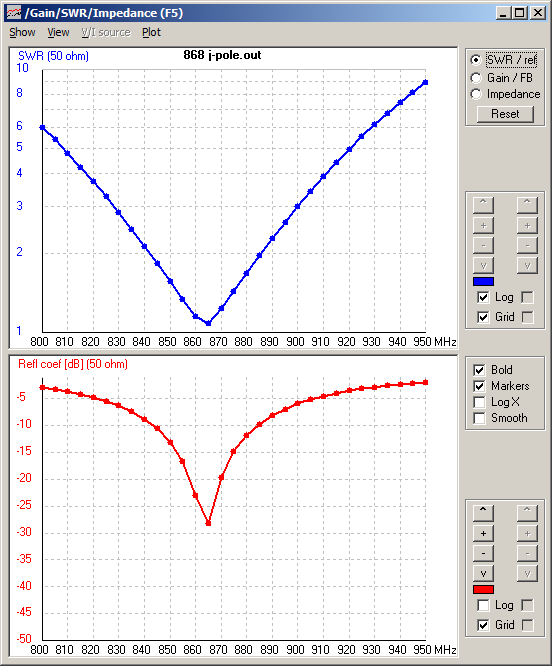 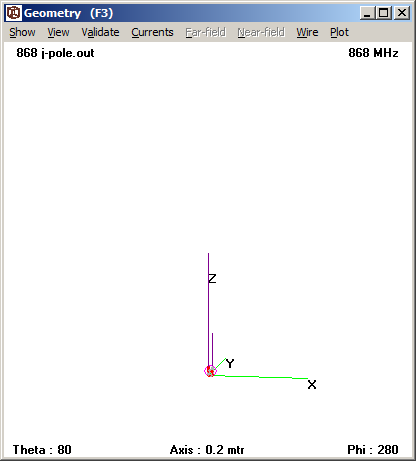 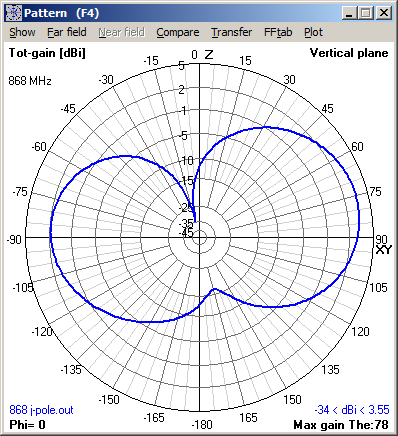 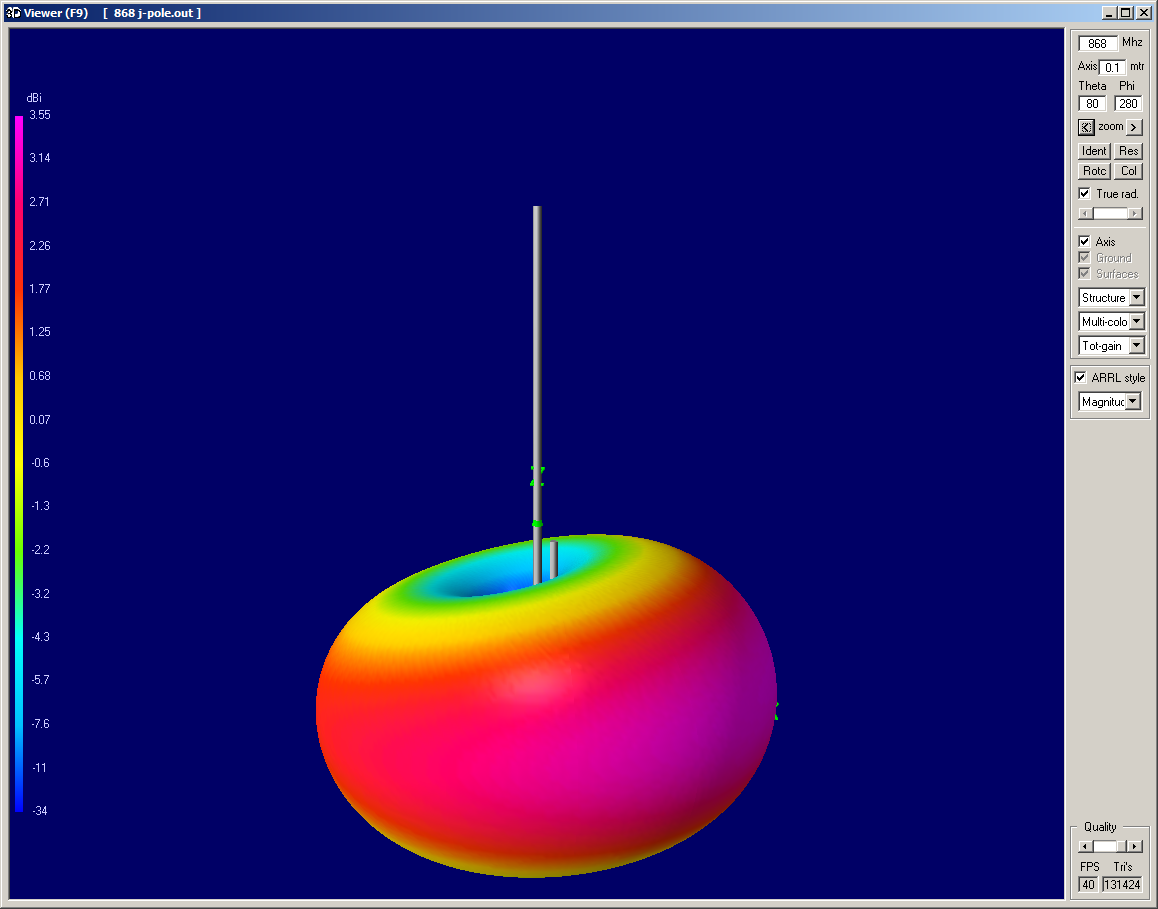 Now some simulations above realground (average). 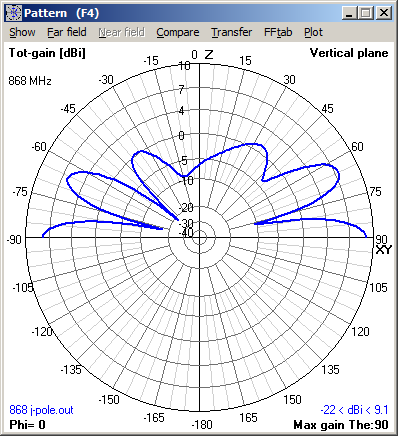 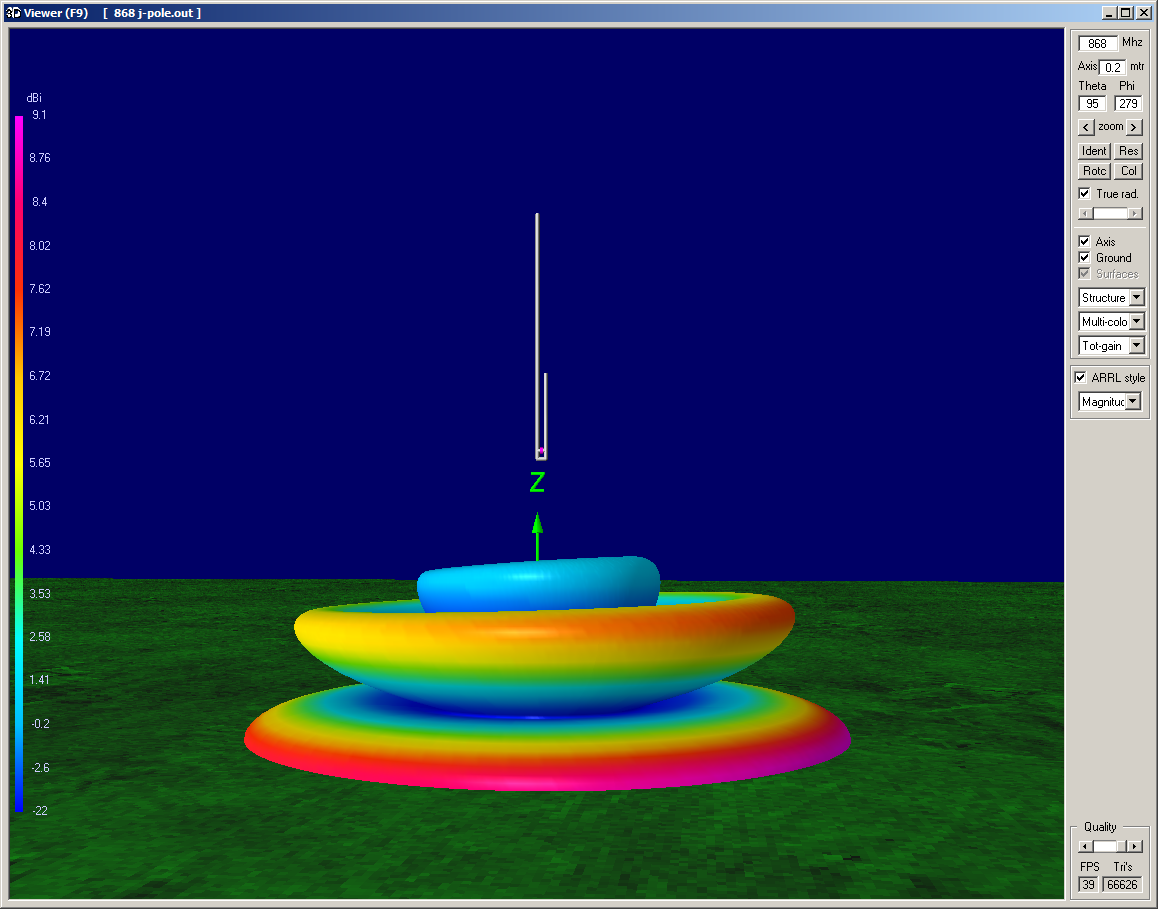 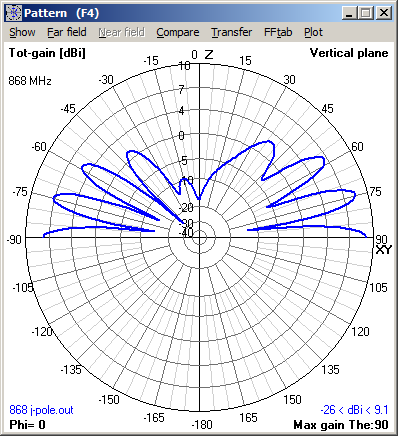 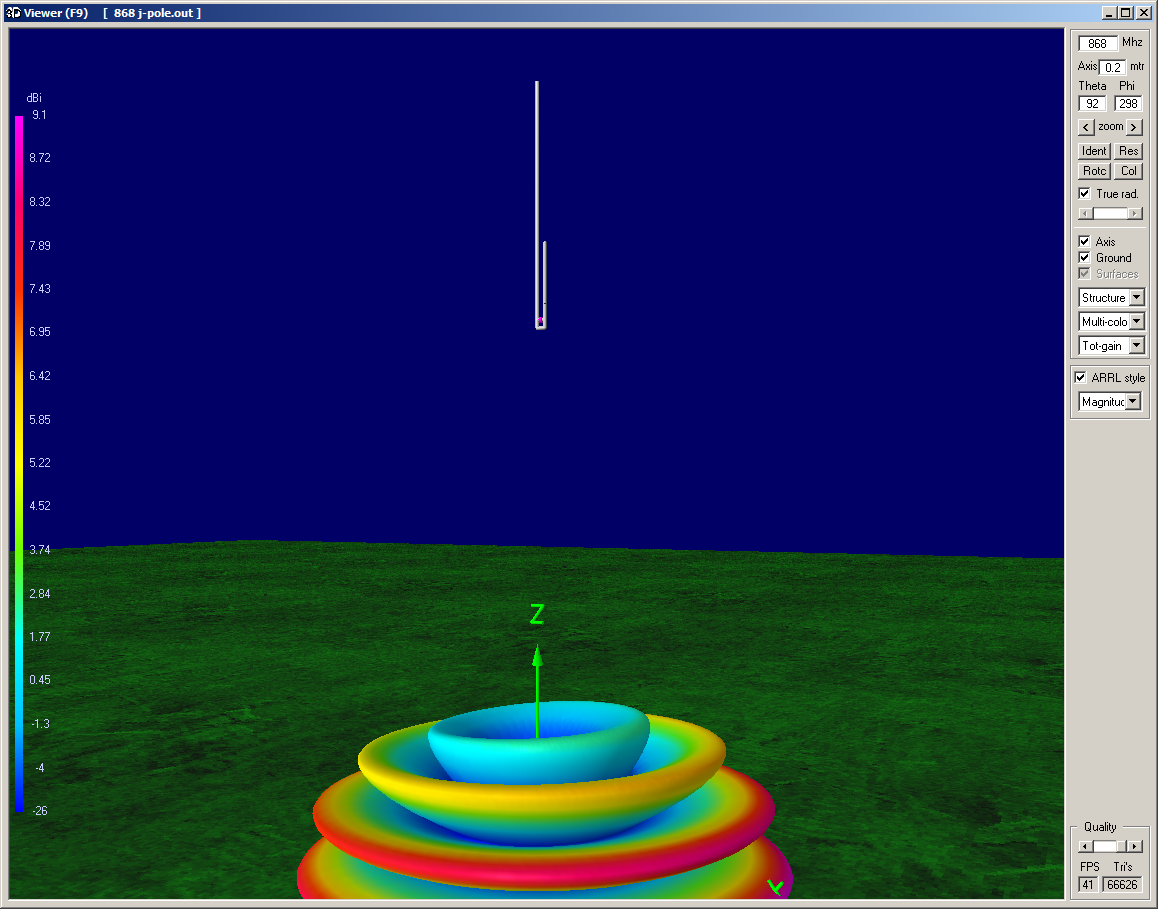 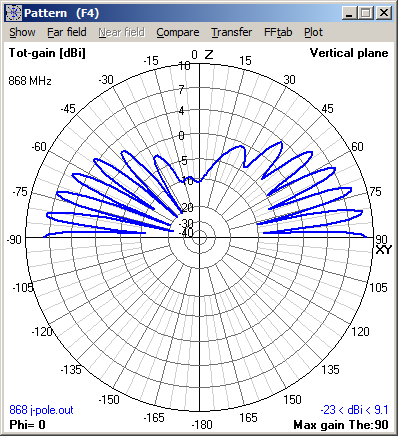 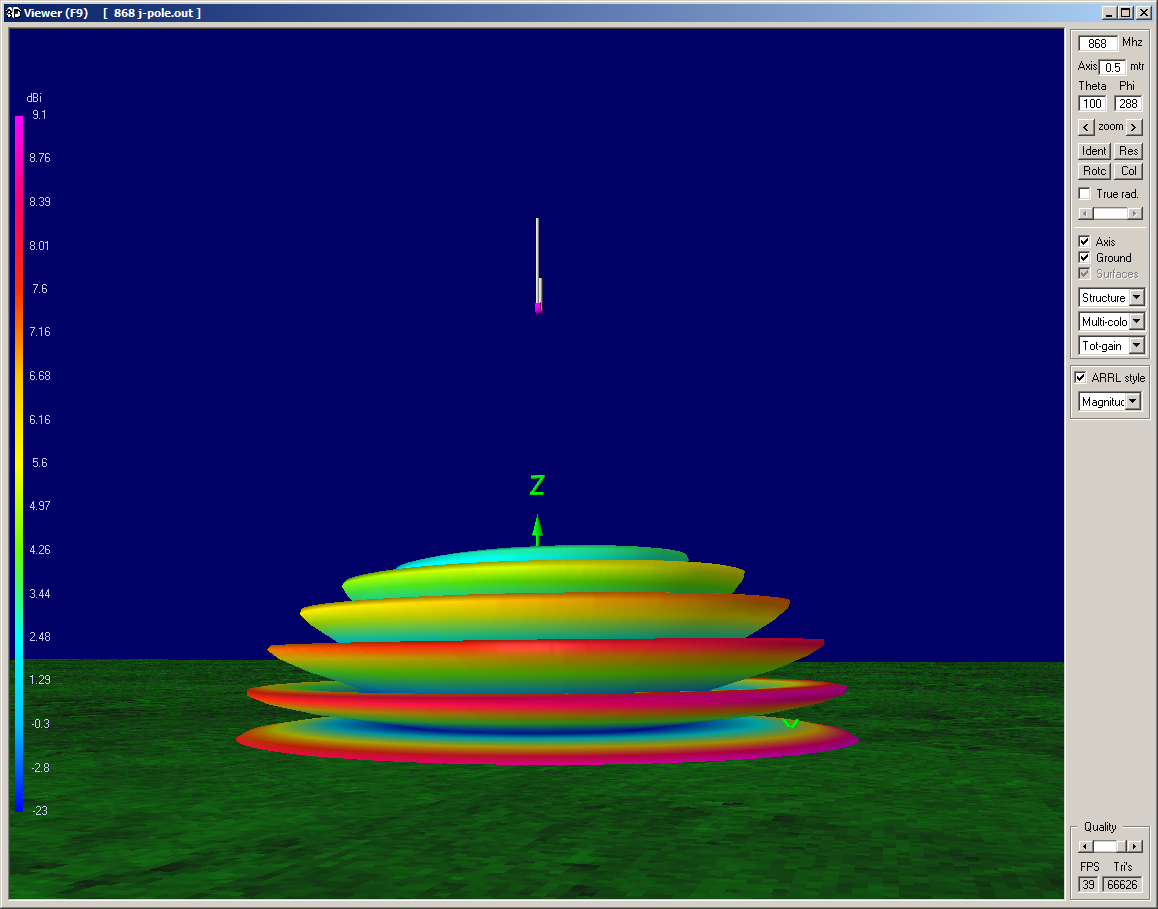 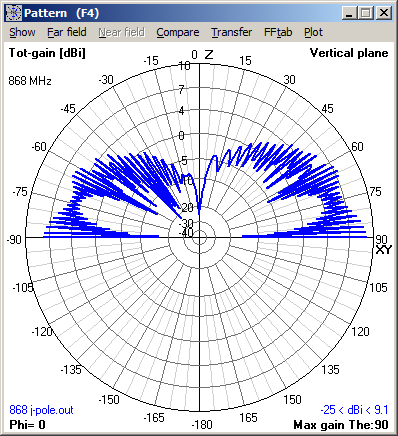 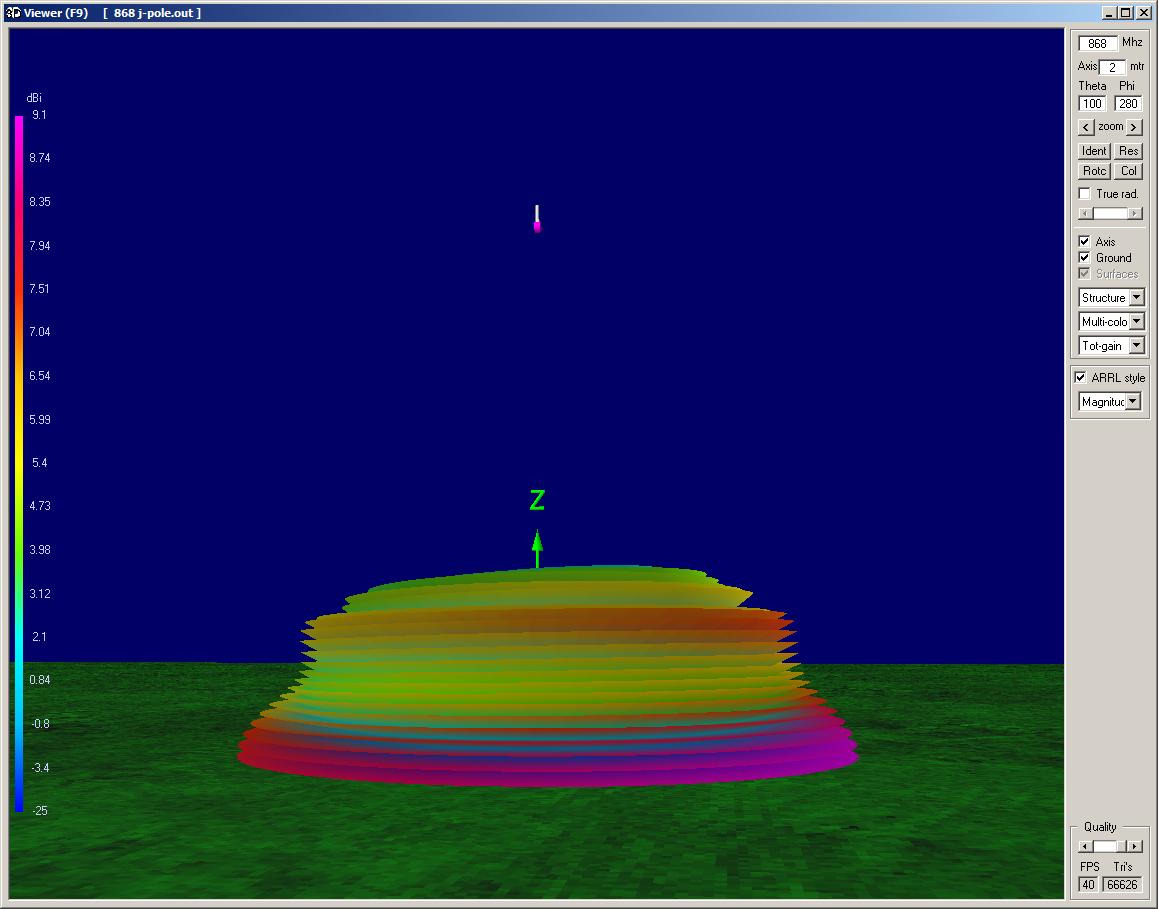 would a ‘Cloverleaf’ antenna be possible too ?

can you provide some insight in antenna polarisation and whats best for lora communication ?

You have read my mind, because that would be the next antenna which I’m building. I already made one for 1250Mhz hamradio ATV and the concept works.

FM operating is done with vertically polarized antennas because vertical antennas on vehicles are much simpler to construct and install. Vertical antennas are also omnidirectional, meaning that they transmit and receive equally well in all directions. These characteristics are important for mobile operation — the first widespread use of FM. To prevent cross-polarization, the base antennas are vertical. This convention is universal.

A popular and inexpensive vertical antenna is the simple quarter-wave whip, or ground-plane, antenna. Many hams build a short ground-plane antenna as a first antenna project.

When you’re interested, the free PDF of the book “Hamradio for dummies”, can be download on this link). Recommended reading for every one who wants to get into wireless communication (I have the paper version on my bookshelf

The VSWR ratio seems good, but remember that VSWR is not that important. For larger powers this is important since reflected power will affect the end-stage of the transmitter but the output of the LoRa node is just +14dBm (25 mW) so even a 1::2 VSQR ratio will result in just 2.5mW reflected power - something the chip can easily handle.
More important is the radiated power from the antenna. A 50 ohm termination has a perfect VSWR but as you know it will not radiate any power ;).
Also take into account the cable. RG58 has a 15 dB/100m dampening so a 1::2 VSWR ratio will have the same effect on the radiated power as 3.3m of RG58 cable

Nice to hear that radioamateurs are also present on this TTN platform.
After all, lora is a digital wireless modulation technique that remembers me of the layer 2 AX25 protocol used on the APRS platform, be it on 2 m (144.800 Mhz).

I love to see more contributions on antennas as the coverage of low power signals is important in this respect.
73s de on3zoe,
Wim.

We have fiddled a little around with the feed point to get it close to the 50ohm match. but shifting and soldering 0.1mm steps is a bit hard

. But you are absolute right on the mounting of the horizontal cable. Normally I would use a small piece of semi-rigged coax cable, but for this “see if it works” project we used what was in the junk box (the BNC chassis part). A week later we made another one for 23cm and we did use the Semi-rigged for that (because the soldering points needed to be very small). 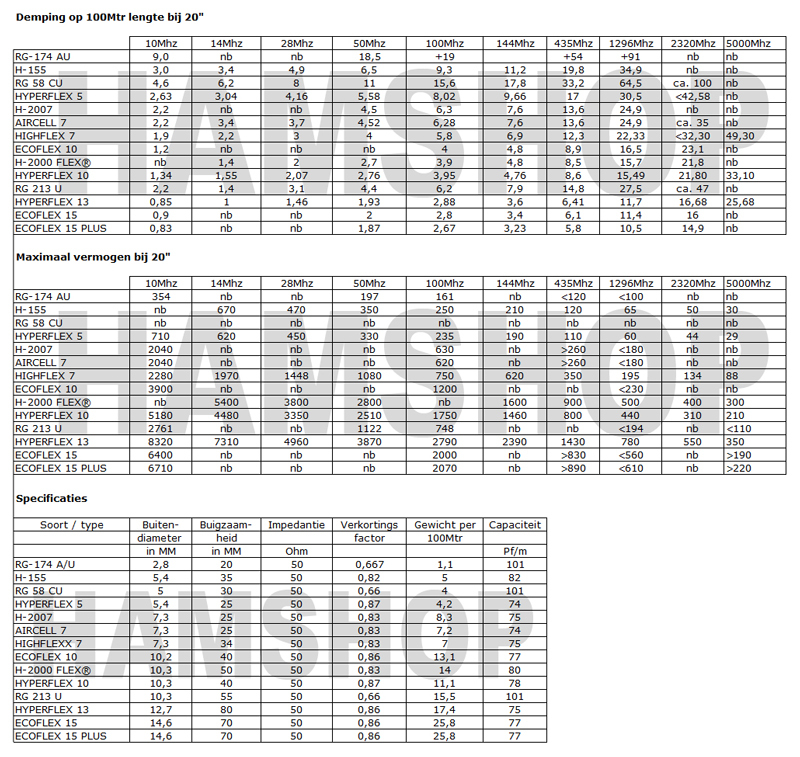 Thats one of the reasons I like to work with the Aircell 7, I could use the HyperFlex or EcoFlex cables but working with 10mm+ diameter cables is like plumbing. (but sometimes you just need it). LOL
That’s why a wrote a step about cables in this LAB https://www.thethingsnetwork.org/labs/story/simple-homemade-outdoor-868mhz-antenna-groundplane/step/step-6-cable (the RG-58 note in that step is for the normal non CU RG-58 cable).

Nice to meet you on this medium OM Wim, I would have expected more radioamateurs but I think it’s not that well know in the hamradio world (ISM frequencies doesn’t have a top prio there). Having experimented with LoRa for a while (just wanted to know what it is and you can do with it), one evening at the Veron/VRZA Twente measurement group it came up and ended in a good discussion about the technology and possibilities. The week after that one of the OM’s told me he ordered a few RFM95W to start experiment with it (don’t know if he will be joining TTN but time will tell).

Personally I haven’t done much with 2m AX25 except for (had) having a receiver / modem on my server to pickup any APRS messages. But I believe that packet radio is, except for APRS, close to QRT in PA.

Just a idea : maybe it would be nice to start a topic on the forum where hamradio operators can announce / introduce them self and offer support for there local community when there are RF related questions / problems.

Once a ham, always in the blood.

Some OM’s go QRT for more then 10 years but due to new technologies, change in licenses and/or new opportunities (think about PSK and other digital modes), often it start to itch and they are calling CQ again

Hope to meet you on the bands again.

The same on this end Lex,

we went QRT more then two decades ago, but when we discovered by accident the new digital technologies we started ‘CQ-ing’ again, not by voice but by ‘bit and bytes’ (mostly SDR technology and no vintage gear).
Just as you are involved in IT (QRZ --> PH2LB), we are too in system engineering and telecommunications education.
So nice to meet you on the new airwaves here and we are following this thread to see if other ham enthusiasts are presenting themselves with new ideas on use cases or antenne constructions for a loraWAN infrastructure.

After a busy weekend I finally did some antenna measurements.

The J-pole was always one of my favorites. As a student I had not much money to spend on my equipment and not much room to place an antenna so I built a J-pole for 2m to be able to reach our local repeater with my old handheld tranceiver. So when I started my LoRa developments, the J-pole immediately came up as a nice antenna. It’s small, easy to build and does not take much space (read: does not attract too much attention when mounted outdoors).

The antenna works, that’s for sure, but how easy is it to make one in a reproducible way without the need of expensive equipment to tune the antenna.

This is what I built:

It’s a 2mm welding wire, bent around an 8mm drill bit to get the right curve. Three round polycarbonate discs keep it centered in a 16mm plastic tube and a standard SMA cable was cut and soldered to the antenna feed point.

The Antenna is 24.9mm long, the short part 8.3cm and the feed point is at 8mm from the bottom. This gives the following diagram on the network analyzer: 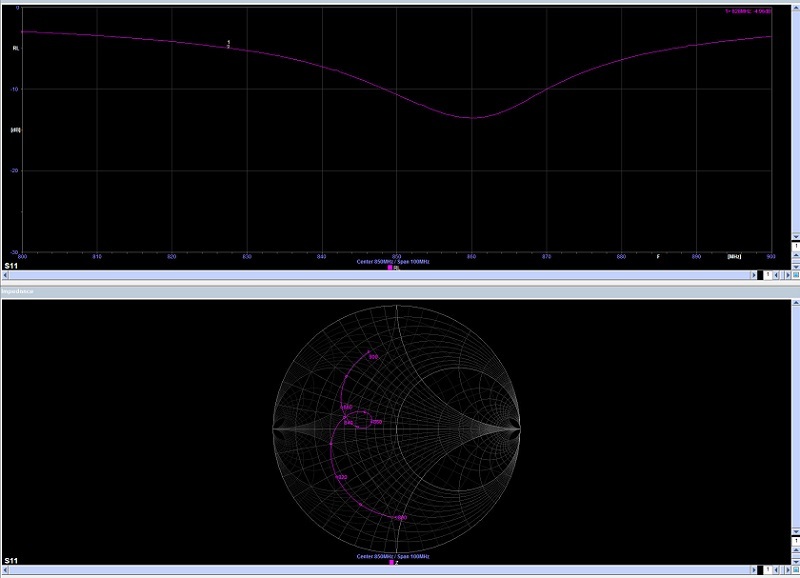 It is not that visible due to small numbers, but the dip is at 860 MHz and had a 13dB return loss. The bottom diagram shows the impedance: The horizontal center line is a pure reactive impedance so the antenna acts almost as a pure resistor (which is good). 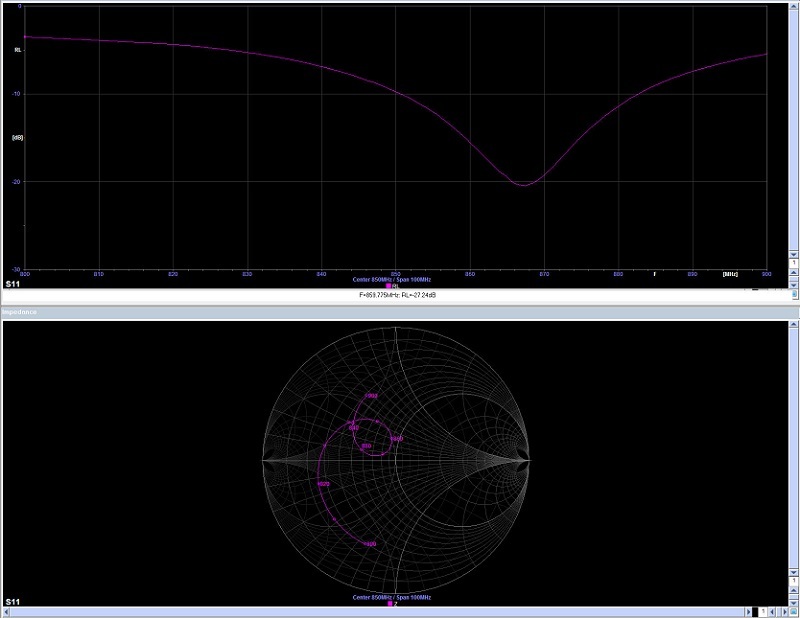 As a comparison I did some measurements on the “John Deer” antenna that’s being sold by a number of shops: 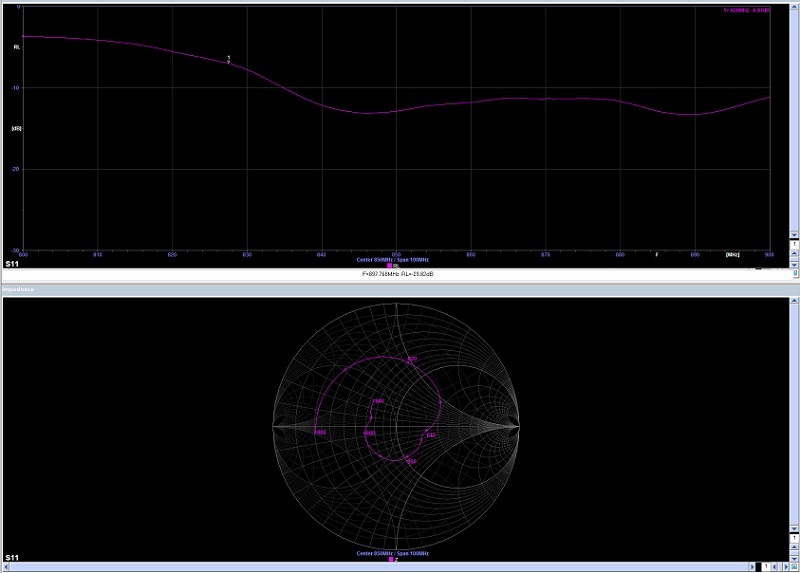 This is a dual band 868/915 antenna with 9dBi gain. The return loss is (at 13dB) a bit worse than with the J-pole but still not that bad. With a 5% power return loss instead of 1% is still good. With the small powers of a LoRa tranceiver it still won’t damage your equipment.

So I’m happy with the results. The antenna length is not that critical (+/- 1mm does not change the antenna that much) and placing the feed point at the right place is easy.

Nice story with good info Rob. Thanks for sharing.

Looks great, definitely one to try out

. You posed a question:

but how easy is it to make one in a reproducible way without the need of expensive equipment to tune the antenna.

How would you rate that? You used an analyzer that is able to produce quite fancy pictures, so probably it isn’t cheap?

Do you think we can get decent results with just the layout you described without using an analyzer?
I guess your PVC pipe passed the microwave test? (although 2450 Mhz is not 868 Mhz ;-)).

Expected gain is typically 2.2 DBi in the H(orizontal)-plane I understand? (assuming you put the antenna upright).

How would you rate that? You used an analyzer that is able to produce quite fancy pictures, so probably it isn’t cheap?

Depends on what you call cheap.Compared to Rohde & Schwarz analyzers the Megiq VNA is cheap but for most of us around 4k EUR is a lot of money

I made way more measurements that the few posted. I played around with the feed point and the length of the legs of the antenna to see how much this influences the frequency and return loss. Looking at the fact that it was not that hard to tune the length and the position of the feed point within 1mm, I concluded that it is not that hard to create more antennas with equal performance.

I actually made the original antenna using the same calculator and number provided by Lex and that one was almost spot on. After placing the antenna in the PVC tube I calculated the new valocity factor and the new antenna was (again) spot on but could be improved by placing the feed point 1mm further.

The next thing to do is to bend a few more welding rods and test then on the analyzer. The analyzer is something I can borrow from the office but it’s being used right now by another colleague to test a product we sell so I don’t expect any new results before end of next week.

On Saturday the 5th of November we are organising a LoRa hackfest at the SODAQ HQ to exchange ideas, thoughts, designs etc. on LoRa antenna’s and boards. You guys want to come?
We have some prizes for the best antenna design to be won!

I would have come, but that Saturday I’m all ready participate in the home brew exhibition at the “Dag Voor De Radioamateur” ( https://www.veron.nl/evenementen/dag-voor-de-radio-amateur-dvdra/ ) showing and demonstrating some of my home brew projects. 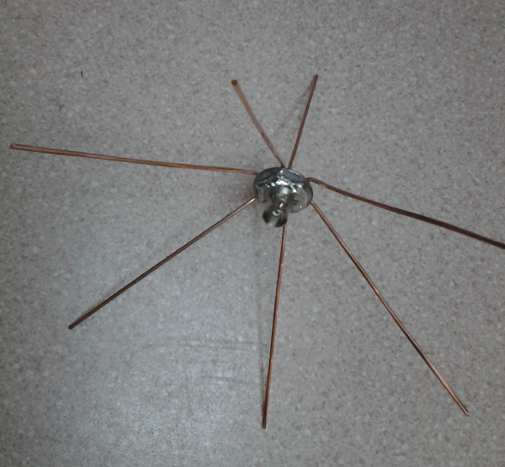 FLARM is an light aircraft early warning system on 868 Mhz !

I use such a J-pole antenna (left over from an older FLARM project) for my single channel gateway and did some range experiments with ttnmapper.