Any support questions you might have can be asked here:
https://www.thethingsnetwork.org/marketplace/product/lora-ers-ers-lite 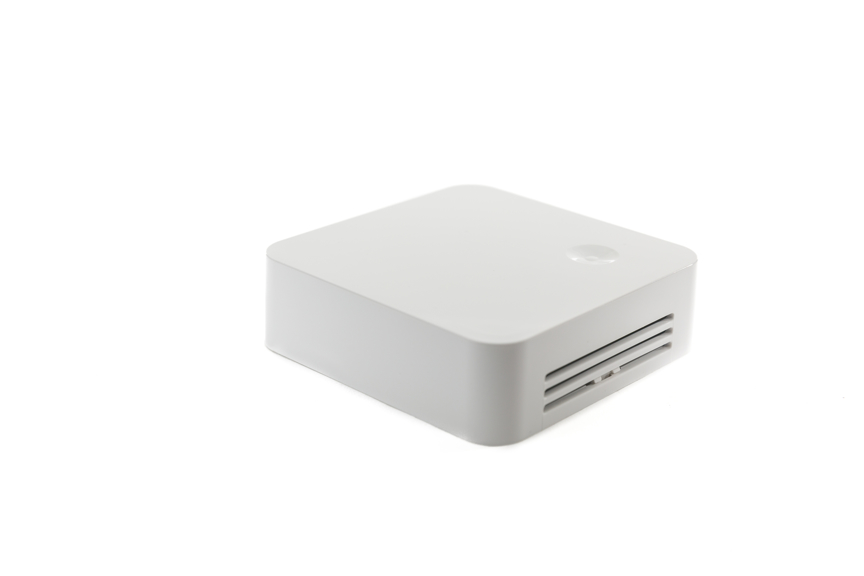 I would like to increase the time between LoRaWan transmission. From the ELSYS downlink payload document, I think this is the 0x14 SplPer (period) and 0x1F SendPer (multipler) items, but how do I specify the period (seconds??)? For example, what would a 10 minute period look like? 3E0514xxxxxxxx051F00000001

Also, it looks like the ERS-lite device currently wants each uplink confirmed. Is there a command to turn this off?

Below the Payload Format to be used in the Console. I had to modify the payload provided by Elsys slightly to make it work with TTN.

Thanks laurens, but I am actually looking for the downlink, not the uplink.

Are 0x14 SplPer (period) and 0x1F SendPer (multipler) defined as seconds or minutes?
The Elsys documentation only mentions that they are 4 bytes in length, but no unit is specified.

Hello Guys,
I’m using a TTN gateway that is working well with some devices but I can’t connect a couple of elsys devices ( ELT-Lite and ELT-HP-2). 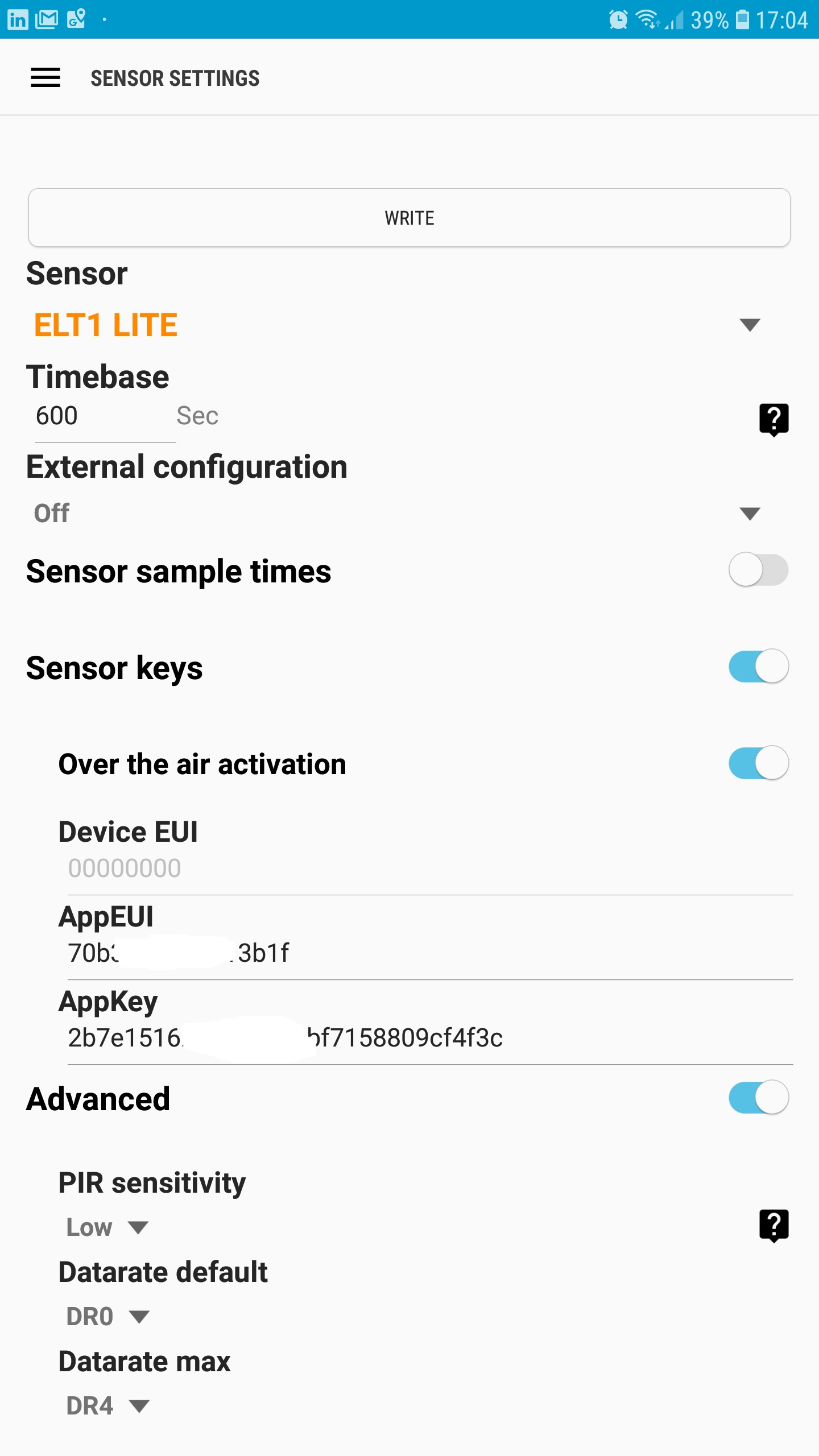 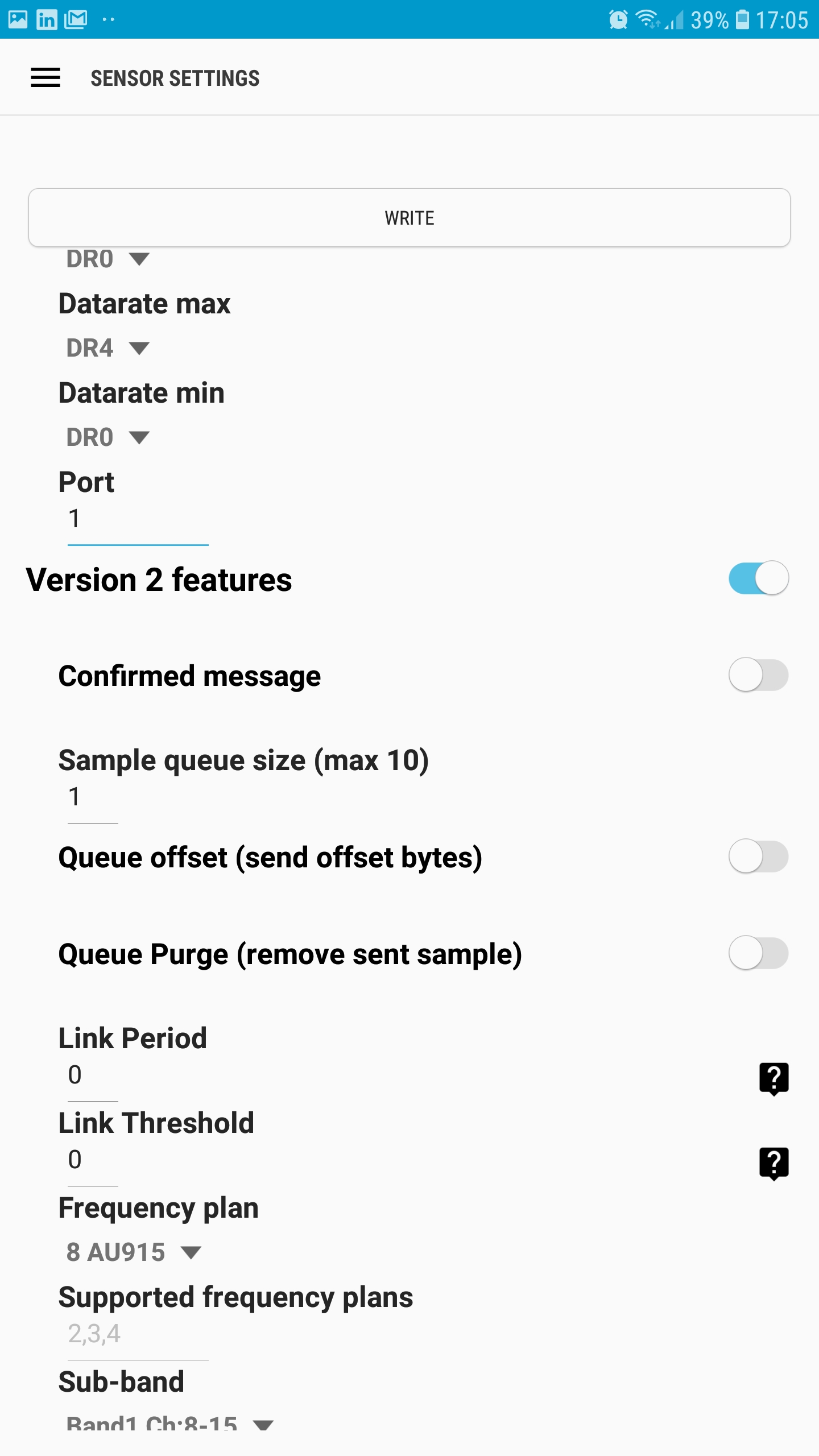 I don’t know what I’m doing wrong. People here said that is working but I wasn’t able to find a “howto”. So, it’s very very easy or I’m very stupid (or both).
I found this related pages:

Thanks in advance for any help.

We have many of these Elsys ERS-lite’s working over TTN.

What issue are you running into?

I can’t see traffic on my gateway. I’m assuming that the devices are not connecting.
I’m using a TTN gateway configured with AU band 915Mhz. I have other devices working but with this one I really don’t know how to troubleshoot it.
I triple check DEVEUI/APPKEY/APPEUI are the correct ones.
Just confirming that is not a ERS-Lite is a ELT-Lite (should be the same procedure/configuration).

Hello all, has anyone successed the connection to TTN via gateway configured for AS923? I have tried Multitech Conduit and Dragino LG01 as packet forwarder, but failed.

I believe SplPer is in seconds, as it’s also configurable in seconds via the app, and the configuration value stored in the NFC tag is also in seconds.

Not sure about SendPer yet. On the ERS with CO2 sensor that I just checked (a rev E with firmware 2.2.4), the SendPer and several other *Per multipliers are all set to 1. I assume they just /are/ multipliers.

They have a nice generator on their site.

Always apply the reboot… I learnt a hard lesson there.haha

When I follow your guide with my Elsys sensor it does not respond.
It keeps sending at the old interval.

Any idea why this happens?

Did you see the sensor reboot afterwards? How far away from the gateway is it?

To confirm these are the ERS-lites? How strange.

I’ll send the command to one of ours now, and show you the traffic.

I am working with ELT-2’s.
The downlink payload format is the same for all models.

This is what happens with ours. As you can see the device reboots and re-joins afterwards.

I tried to reconfigure the SplPer and SendPer with a downlink message to port 6 (including a reboot command, payload created with Elsys downlink generator) but no reboot seen and sensor stays at the old sample & transmit periods.

Last test was against a sensor running firmware 2.2.7. I also tried a confirmed downlink; after that one, the sensor was lost completely, so I’ll have to go out and try to fix it on-site.