Single channel packet forwarders are NOT supported by The Things Network and we condemn their use.

Single Channel Packet Forwarders are often called Single Channel Gateways which is incorrect, confusing and misleading. They shall not be called gateways.

Be aware that some vendors will try to sell Single Channel Packet Forwarders as a gateway which they are not. These cannot be used as gateway for The Things Network.

NOT supported also means that single channel packet forwarders may no longer work after the community network will be migrated to V3.

Only LoRaWAN compliant gateways are supported by The Things Network.

Years ago in the early days of The Things Network, LoRaWAN gateways were very expensive and out of reach for many. In those days a Single Channel Packet Forwarder was an affordable alternative to start experimenting with the technology and The Things Network.

During recent years much cheaper and much more affordable gateways have become available. The Things Indoor Gateway costs around €85 (VAT included) and there are many options for both DIY and commercial gateways in the price range from €120 to €200.

In the last years many gateways have been deployed worldwide and network coverage has become available in many areas on the globe. The effect and importance of the negative impact of Single Channel Packet Forwarders on successful operation of the network and its users has substantially increased with the growth of the network. Therefore use of Single Channel Packet Forwarders is now deprecated and is condemned by The Things Network and on this forum. 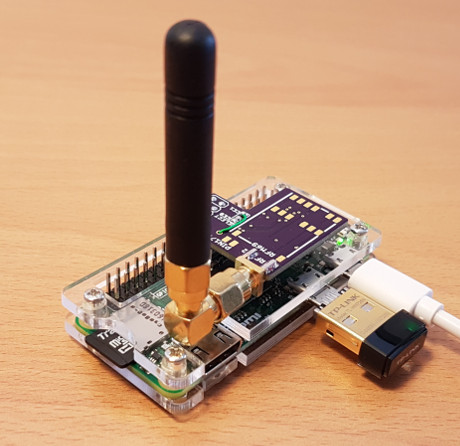 This is mine with Pi0w. 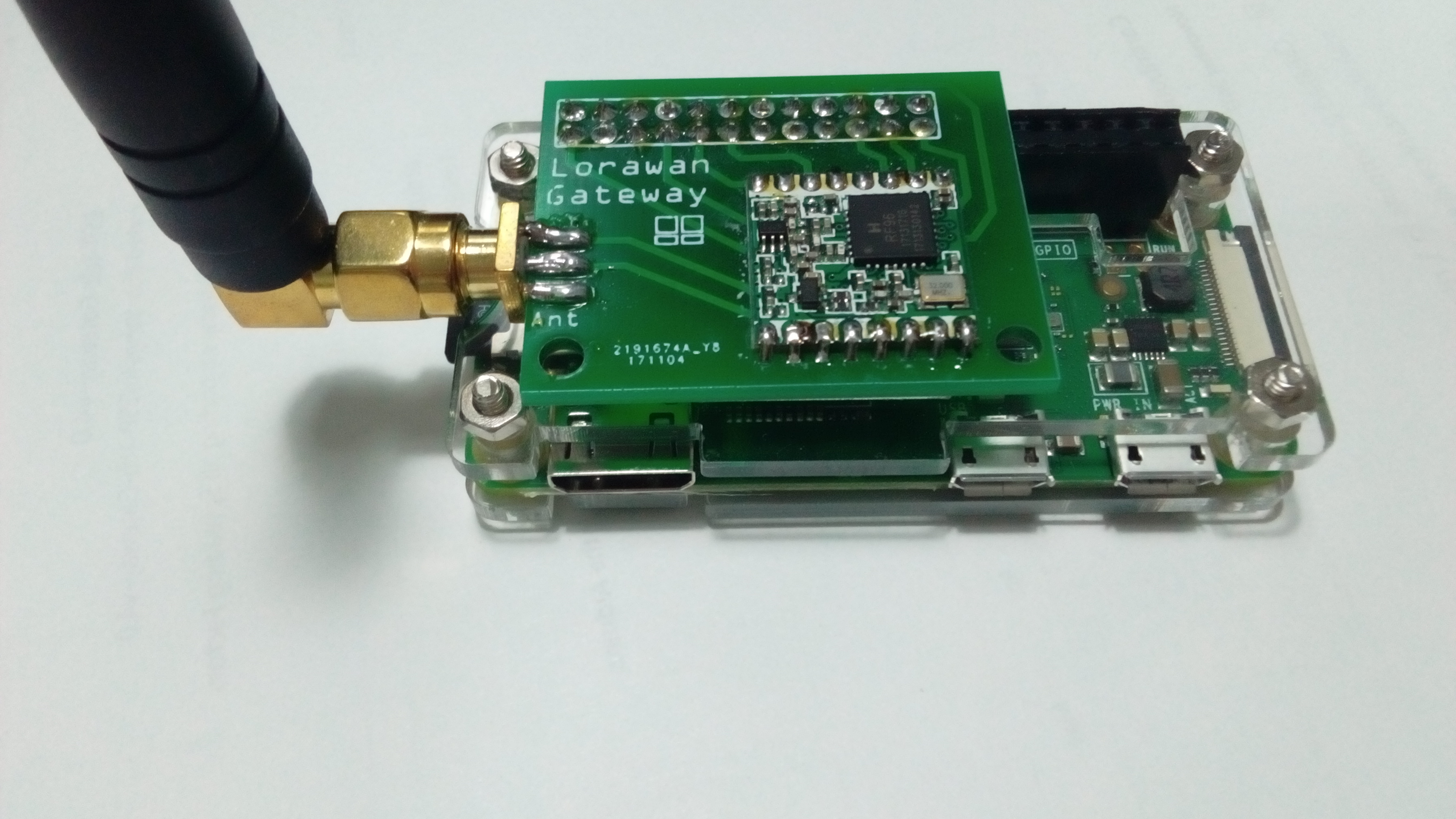 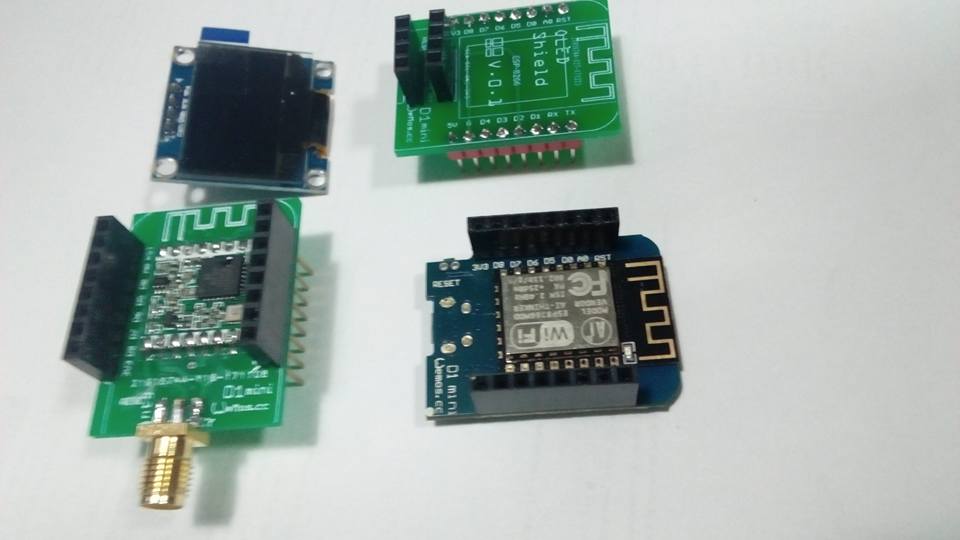 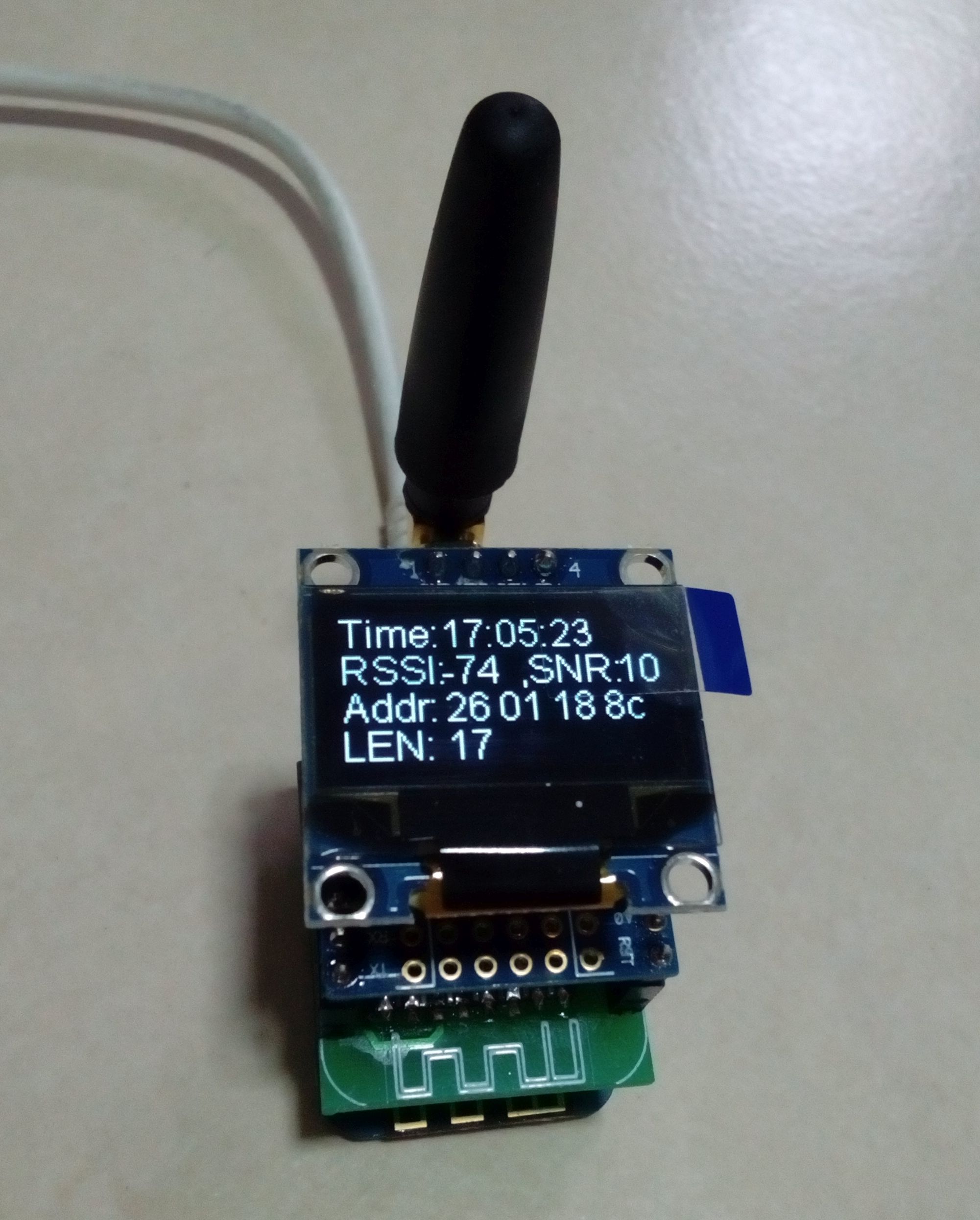 I have the Heltec and can’t get it to compile. Everything from wpa.h seems to be broken or missing.

I have the Heltec Lora Oled board and can not seem to get the 1 channel gateway compiled for the life of me. It seems like anything to do with dependencies in wpa.h are failing. I have installed the tool chain from both Espressif and Heltec and both seem to be missing things like c_types.h and the rest of the includes. So looking though the various distributions I found some of the files in the esp idf github and finally got to the point where the compiler was starting to wine about various redefinitions and undefined enums.

I am presuming I have my libraries installed wrong. I can load things like the display test and other things just fine but the gateway stuff seems to continue to evade me. I don’t happen to have an esp8266 with a lora module or I would use that. Any help would be greatly appreciated.

Better use PlatformIO on Visual Studio Code as IDE. It managed libraries much better than the Arduino IDE. I had no problems to compile the single channel gateway an run it on the Heltec.

Thank you I have it installed I will try tomorrow to compile.

It is not very useful to dump a long list of output this way and without any accompanying questions or remarks.

The more specific (and better prepared) your questions are the better others can help (and are willing) to try answer them.

I think I have found that all of the problems that I had involved how the libraries were installed. What I posted were mainly examples where the compiler was telling me that either things were being redefined or where never defined.

I am new to this development environment and was and am somewhat confused about setup of vs code, platform io and the 1 ch gateway source tree.The directions for the source tree are easy to understand but the rest was not intuitive for me.

Did you success to compile?

No, actually, it seems to have a ton of problems. I get a lot of message from the compiler suggesting that things are being redefined. I am not sure I have the right libraries or may have duplicates. I clearly am missing something.

While I have setup a multi channel gateway where I live as the range doesn’t still quite reach where I wanted. While I’m looking at improving it I still doubt it’d reach the few locations I want it to.

There has been some discussion about Single Channel Gateways and weather they should be used for the fact that then nodes programmed for use by them are fixed to the same frequency, And while the multi channel gateways have come down a lot you can build a SCG for around £10 for a ESP8266, RFM95 & PCB.

I was wondering if say I was able to get a few setup, what the procedure is seeing that they aren’t supported by Lora Wan. Should we register them in TTN Console etc?

Should we register them in TTN Console etc?

If you want to use it with TTN then yes, you will have to add it as a gateway to the console.

Just finished assembling this, A PCB that houses both the ESP8266 and RFM95 module on one PCB. Awaiting USB Connectors.

Designed to be a slightly more compact solution to plug into a USB Power socket on a phone charger.

Just need to figure out the software fully on it and do a few tests. 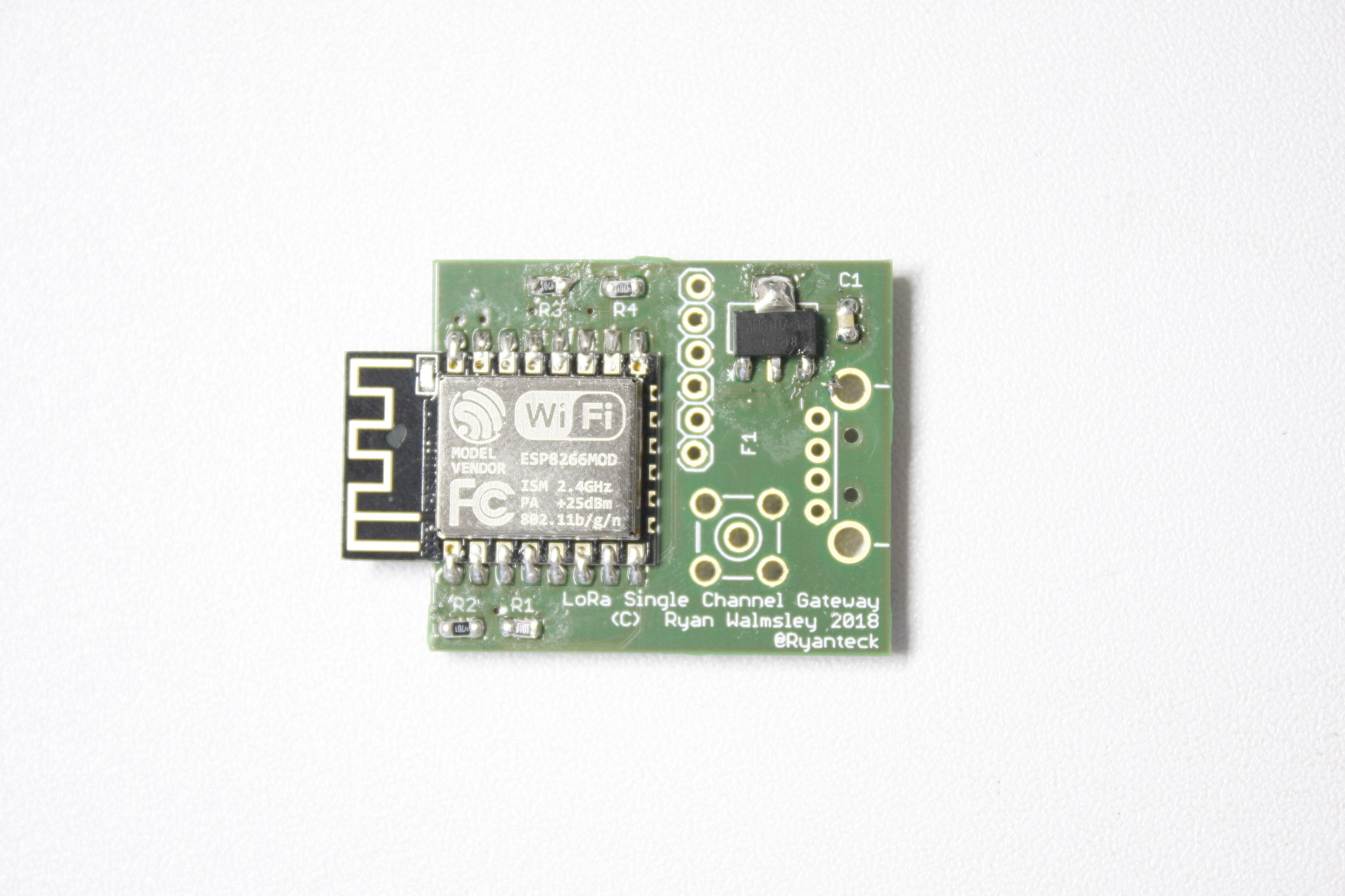 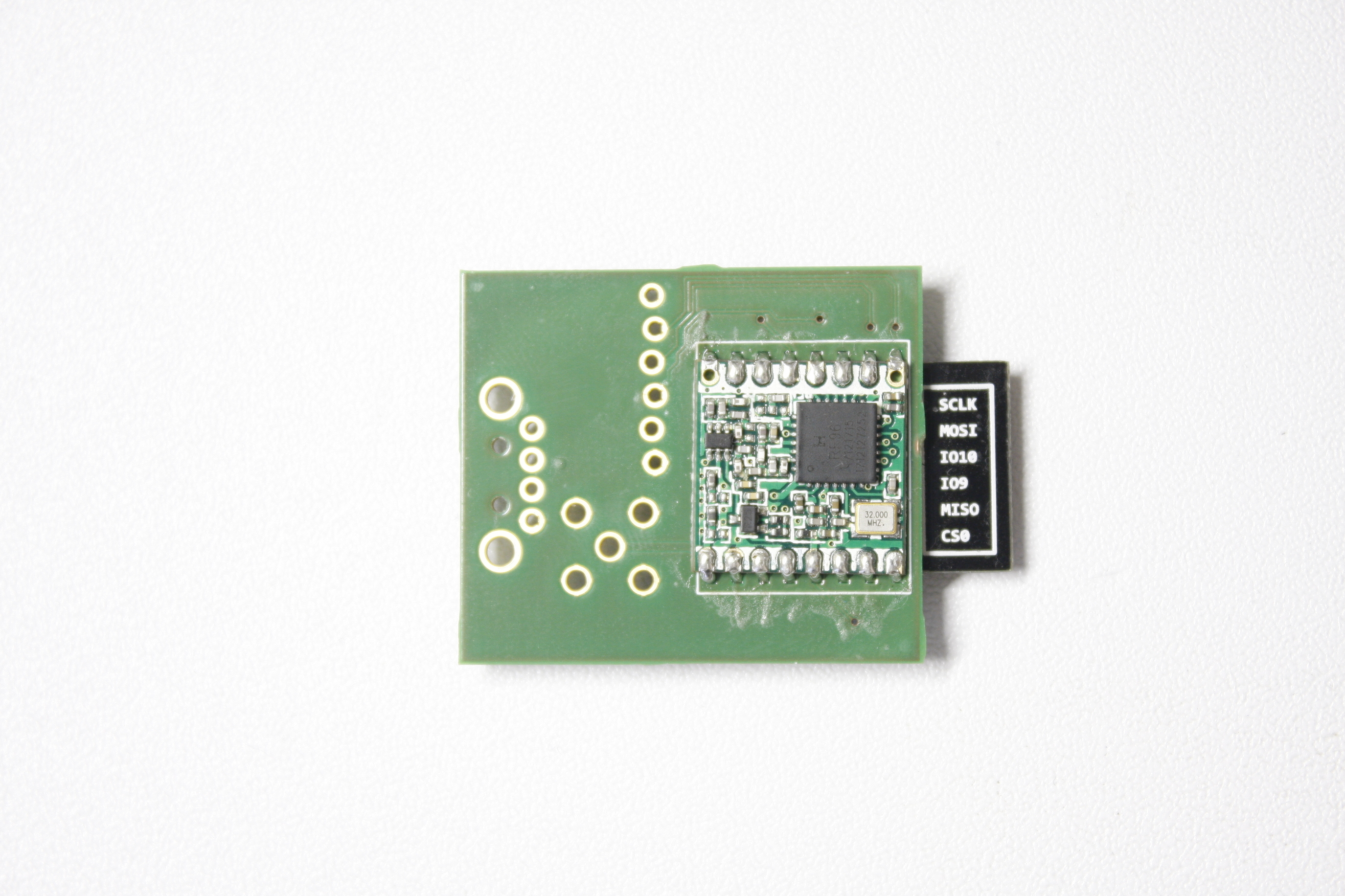 EDIT: All fully working using the V5 ESP Firmware. Should be ideal for a few development cases. I might have some spare boards and kits up for sale soon.

Hello people. I’ve implemented the single channel gateway with a SX1276 (specifically Dragino Lora Bee).
Right now the Raspberry shows the following receptions (attached). In the capture I receive a packet with a working node that contains the word “PONG” but I’m not seeing exactly that. Another thing is the node is sending this packet every 3 seconds but the gateway receives every 15 minutes or more.

I don’t really know if this is the correct functioning.

Please sorry my not-experience about all this but I’d really appreciate your help.

@fblanc92 , Single channel gateways are not “proper” gateways, most SCGs run on “Channel 0” or 868.1Mhz. A LoRa Wan compliant gateway can listen on 3 channels with most listening on all 8 for full compatibility.

At the same time nodes can transmit on any of the 8 channels, of which your gateway can only receive on the one channel.

As of this if your node is deciding to transmit on other frequencies more often then your gateway won’t be recieving them.

As of now there’s currently no way I know that allows a single channel gateway to listen on all 8 channels. However for development only you can force your node to transmit on only 868.1 Mhz. It’s only recommended that you do this while developing / don’t have coverage with a full gateway.

How to do this will depend on what you’re using as your node.

As of this if your node is deciding to transmit on other frequencies more often then your gateway won’t be recieving them.

As of now there’s currently no way I know that allows a single channel gateway to listen on all 8 channels. However for development only you can force your node to transmit on only 868.1 Mhz. It’s only recommended that you do this while developing / don’t have coverage with a full gateway.

Ryanteck thank you so much for your clear explanation.
The SCG implementation is only for demonstration of a simple protocol implementation.

I’m transmitting at 868MHz actually because is the allowed frequency by the fabricant library (Semtech), with a 500Khz bandwidth, using SF7 and coding rate 4/5.

I’m trying to find the way to transmit at least a char sequence because the coded result is not usefull at all for me (I did it with two end devices, and I want one of them to become a gateway with a RPI).

For what you said to me the key is on the end device, so I’ll keep working on that.

If you’re sending text (don’t) then your packet should be about 17 bytes: 13 bytes LoRaWAN overhead, plus 4 characters. What you’re showing are a whopping 126 and 40 bytes. So chances are those are not your node’s packets.

(Too bad you posted a screenshot of the terminal output, which does not allow us to copy the payload for further investigation/help. Please post text next time.)